Special edition – the man behind this morning’s funny video

A question frequently debated is whether it is Rebecca and I that are the bad influence for our friends or rather, do we simply attract others who are destined for mischief on their own. In the case of the video that I posted this morning, I am going to go on record and say that it was our friend Carl who was behind it all. Yes, it was me in front of the camera doing most of the talking, and Rebecca filming, but it was Carl’s insistence that he see our famed Sambuca shot (not really “famed” but that sounds good), and film it, that made it happen on the last night of his trip to Grenada.

Yes, Carl likes new drinks. In fact, he’s made some pretty cool rum-based concoctions of his own. IN FACT, he’s in the running to be Tommy Bahama’s new Rumologist. What is a Rumologist? In Tommy’s case, it will involve traveling to various destinations, promoting their brand and helping to mix up some tasty new beverages. Sounds like a sweet gig to us, and Carl is sure stoked about it.

If you got a laugh out of today’s video and/or liked last week’s video and/or liked the great photos that we posted that were taken by Carl, why not take a second and help him win by voting? It’s easy to do. Just visit this Facebook page and click on Carlton Grooms. Want to be really cool? Vote once each day. The voting ends next week. It’ll only take a moment of your time each day but it could make a huge different to our friend Carl! How many times do you get such a painless chance to do a good deed for someone else? Be cool and click. 🙂 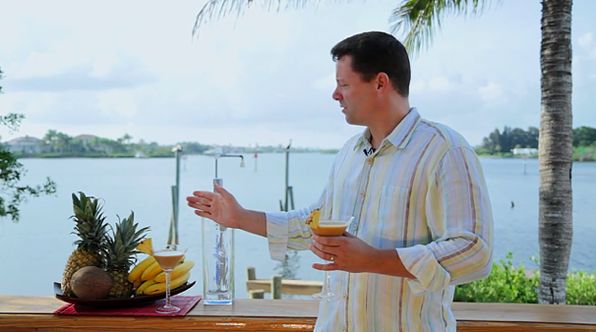 Is that Tommy Bahama? No, it’s Carl Grooms, future Rumologist!

The latest FAQs and answers

Back to her natural habitat

How many trips up the mast?