In my last post I shared a number of shots from our stay in Culebrita, our second stop in our tour of the Spanish Virgins. As the images show, the small, uninhabited island is stunning. The palm-tree lined beach is picturesque and the water is pristine. With the north-eastern swell that was running at the time we entered the bay, it was a tad… exciting to get there, until we made it behind the protection of the reefs that is.

There are several mooring balls in the bay marked “day use only.” As two other boats were secured to balls, we initially grabbed one too. As we frequently do though, we dove on the ball to check the security of what was below the water. I was not pleased to find that the sand screw that the mooring ball was affixed to was partly out of the ground and was bent at an angle, not what I think it is supposed to look like. Inspection of the ball adjacent to that one showed the sand screw to be in the same state. Because of that, we decided to give up on the balls and trust our own ground tackle, a decision which allowed us to sleep soundly. Interestingly, two other boats came in after the fact and tied up to the balls we had checked and discarded, and they spent the night there. I guess we all have different ideas of security.

After our great day and night in Culebrita, we raised sail and headed south for Vieques, the 3rd island in the Spanish Virgin chain. Rebecca and I had visited Vieques on our initial trip south but had only made a cursory exploration of the western and northern shores before easing on to Culebra. This time around it was the southern shore that was our destination.

As we had arrived before noon, we began at the eastern end and took our time entering most of the bays marked on the charts as anchorages. I noted that the depth info was off on at least one of them when we inched our way into the shallows and our depth gauge showed a scant 0.9′ under the keels! We ultimately settled on Bahia de la Chiva as an anchorage for our first night, a beautiful little spot that we ended up having all to ourselves. We swam, we kayaked and we walked the beach. We did not venture beyond the sand though, honoring the numerous signs warning of the potential of unexploded ordinance (bombs!). Yes, the US military used this area for bombing practice until not that long ago.

The next day we once again worked our way westward, settling in to the large anchorage known as Ensenada Sun Bay. I assume that the amazing beach there is a popular hangout for locals on the weekends. On the day that we were there though, Wednesday, there was hardly a soul to be seen. Almost immediately after setting the hook, Rebecca, Michael and I dropped the tender in the water and motored over to the nearby town of Esperanza. We had three main objectives while there: have some lunch, purchase some ice and figure out some way to tour the nearby bioluminescent bay called Puerto Mosquito. This very shallow bay is off limits to motorized vehicles so the only way to tour it is by kayak, SUP or rowing. It is possible to anchor or moor just outside the narrow entrance channel and explore the bay on your own. Rebecca and I opted instead to spend the $40.00 each to take a kayak tour with one of the town’s providers. Michael chose to omit this part of the adventure. 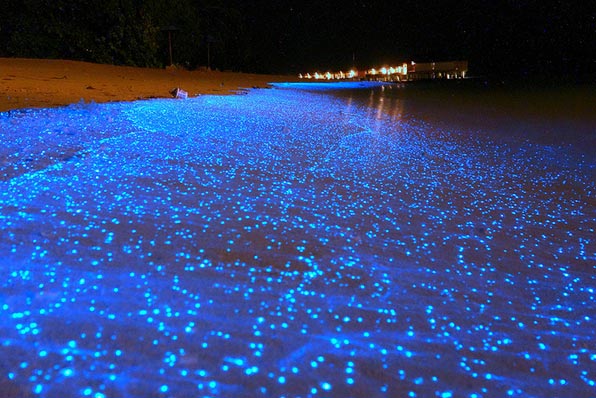 Not our photo but a great one showing the effect of bioluminescence.

At the appointed hour, Michael ferried the two of us to shore in the dinghy and we walked the beach property to the road where we were to meet our guide. Just after 7:00 PM, a large white van pulled up and we climbed aboard with 6-7 other tourists. I should point out that while waiting for our van two different cars stopped to ask if we were OK, offering to call us a cab or give us a ride if needed. That’s pretty nice, isn’t it?

The ride to the kayak launch area was short but bumpy and the staff who helped us get kitted up were friendly and efficient. They have obviously been doing this for a while. It was no more than 10 minutes after departing the van that we were floating in the water in our two-man kayaks. Each kayak was fitted with a glow stick in the front and we were instructed to follow our guide who had a bright blue light strapped to his back. As the sky was almost moonless, the perfect time for seeing the bioluminescence, it’s a good thing that he had that light as without it, it would have been easy to lose our way.

We paddled for some time before stopping the kayaks and after being instructed to do so, began moving our hands through the water. The tiny sparkles that the movement created is quite a sight to see, and some sparkles even hang on to your hand for a brief moment when you remove it from the water. We have heard of people swimming in these bays and I’m sure that would be cool. That, unfortunately, is no longer permitted, at least not by our tour company. The trip continued to another spot where we experienced much of the same phenomena. We ultimately made our way back to the put-in area and our van, again being greeted by the smiling, friendly staff.

Was the trip worth it? Definitely. I will say that Rebecca and I both thought that the bioluminescence would have been a bit more spectacular than it was. The amount of organisms in the water does vary from time to time so perhaps it just wasn’t great that night. We have also experienced this effect at other times so it was not quite so shocking for us as it might have been for others. We also heard so many reports that it was going to be amazing that we may have had our sights set too high. Regardless, it’s an experience not to be missed and we’re glad that we did it. 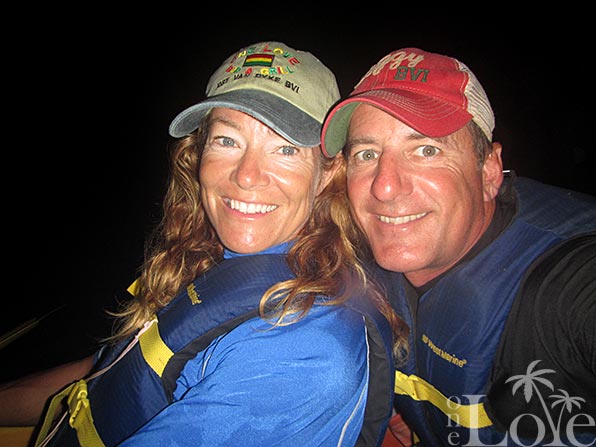 A kayak selfie, that’s as good as our photos got.

Safest point of sail in a gale?