Something other than anchors

Let’s talk about something that makes the boat go (sails) instead of stop (anchors). If there is an “art” to sailing I think it lies with how the sails are set and adjusted, otherwise known as sail trim. I will assume that some people reading this are as new to sailing as we once were so I will point out some of the basics of how sails work. We, like most people, believed that the wind pushed on the sails, thus moving the boat forward. Although this is true when going dead down wind, how would we ever get anywhere if that was the only direction we could sail?

The truth is that a modern sailboat can sail in any direction relative to the wind (referred to as a point of sail) other than directly into the wind. To be more accurate, we can sail up to approximately 45 degrees, give or take, into the wind. When you are sailing other than directly down wind, referred to as running, the wind is actually pushing AND pulling on the sails, much like how an airplane’s wings create lift and allow it to fly. Properly set, or trimmed sails, allow for smooth air flow around and between the sails. Poorly trimmed sails cause turbulence which slows the boat down. To complicate this whole trimming procedure there are a myriad of lines and controls with which to make these adjustments. To even further complicate things the wind is often not consistent, varying both in direction and speed.

So, how does one learn? Well, some initial instruction would be nice. Some people begin on little dinghies while we opted to take a course which started on a 26 footer. Either way, once you know the basics, it appears that a lot of experimentation is required to learn the “art.” How does one know if their sails are trimmed properly? Other than the speed of the boat, sail trim also effects how much the boat is healing (catamarans like ours do not do this in the same way as a monohull) and weather helm (the boat’s desire to turn into the wind). So you, or at least the helmsman, could feel these two forces. What complicated piece of equipment do we use to give us visual feedback on sail trim? Tell-tales. Tell-tales are little pieces of yarn which are taped at various places on the sails. A knowledgeable sailor can look at the colored pieces of yarn and know which of the sail adjustments to make. I would never in a million years have thought that I would want to read a book on sail trim. But, having us get passed by boats who are sailing faster than us, especially ones which I think we should be able to beat, is enough motivation. Note that Rebecca and I are only a tiny bit competitive. 🙂 I recently picked up a book titled Sail and Rig Tuning

in the hopes of learning some tips. It has helped, as did our previous instruction of course. Now we just need to get out sailing and experiment. Fun times! 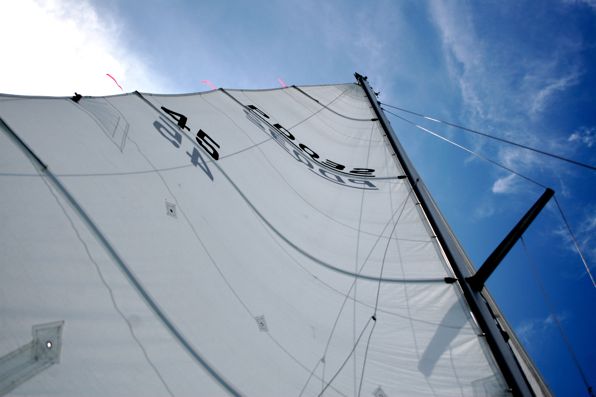 If you look closely you can see the three red tell-tales on the back edge (leech) of the sail.

A gentle transition back into charter mode