We spent little time in Salinas, which may very well be the best hurricane hole in PR. The mangrove-lined anchorage is large, protected and popular. The one full day we did spend there was largely taken up with a sail repair job. Apparently sails don’t like rubbing on shrouds (the cables which hold up the mast). Who would have thought it? To be honest, we thought we had been doing a good job of keeping the sail from chafing on the shrouds but apparently not good enough. We first noticed 1 tear in a batten pocket and after investing a half hour or more in patching it*, we came to find several others. Fortunately, located right at the end of the dinghy dock in Salinas is Tradewinds Sails and Canvas. Mariannne Pfeiffer, the owner of the shop, dropped what she was doing to fix our main sail right away. Not only that, but after quoting us $100.00 for the repair, she only charged us $75.00 when the job was done (and it was done early). NOT ONLY THAT, but she also sent us on our way with a bag of fresh veggies to go with our newly fixed sail! How can you beat that? Two thumbs up for Marianne. The sail-repair experience ended with Rebecca and I racing the regularly-scheduled afternoon thunderstorm to get the sail re-rigged on the boat. And we made it, but with not a minute to spare! 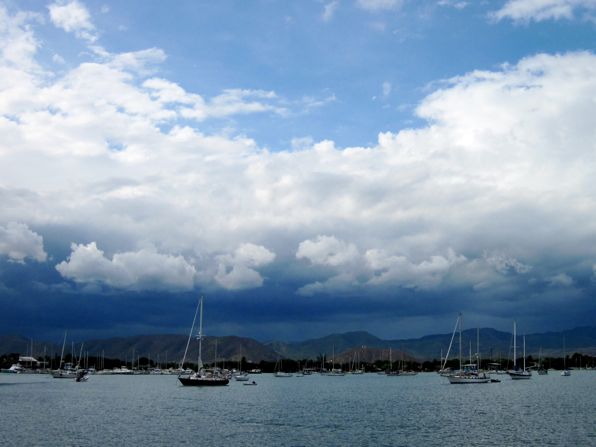 No photoshop required to make these clouds look ominous. They roll in looking like that pretty much every afternoon. 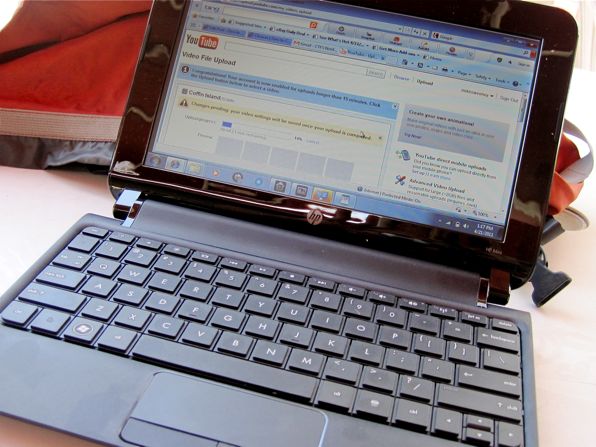 A downside to the Salinas anchorage is that we could obtain no Wi-fi signals on our boat, even using our Alfa amplifier. Good thing we had our new HP Netbook that we could take to shore to use at the local bakery. It did the trick. In this photo you can see that I was uploading the Coffin Island video that’s been driving everyone crazy.

In addition to saying goodbye to Salinas though, we also had to say farewell to a few of our friends there. Our buddy Jim, from s/v Top O’ the World, will be hanging on there a couple more days, awaiting parts (do you see a trend here… cruisers are always waiting for parts to be shipped in). We also had to say goodbye to a new friend, John, who sails on his sailboat Dancyn. Cruisers often have stories about the “characters” that they meet in their travels. John fits the category of “character” nicely. Having sailed around the world in his 32′ monohull, and inexpensively I might add, there is much I’m sure we could have learned from him. Not to mention the fact that he is a riot to hang out with. Sadly he’s heading north, back to the US after traveling the world for the last 10 years. I bet within 6 months we’ll see him back out here on the water. 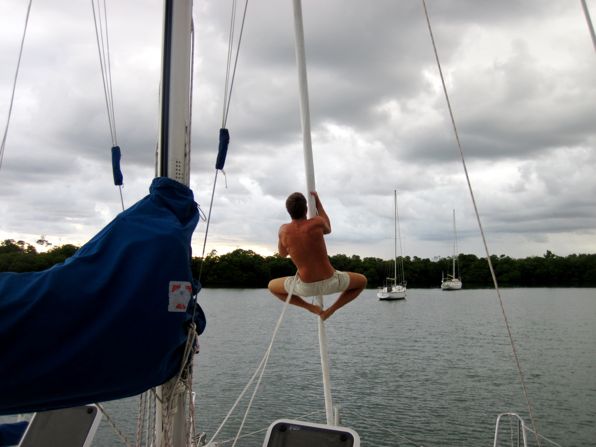 John, beginning his “party-trick” of free climbing to the top of the jib. 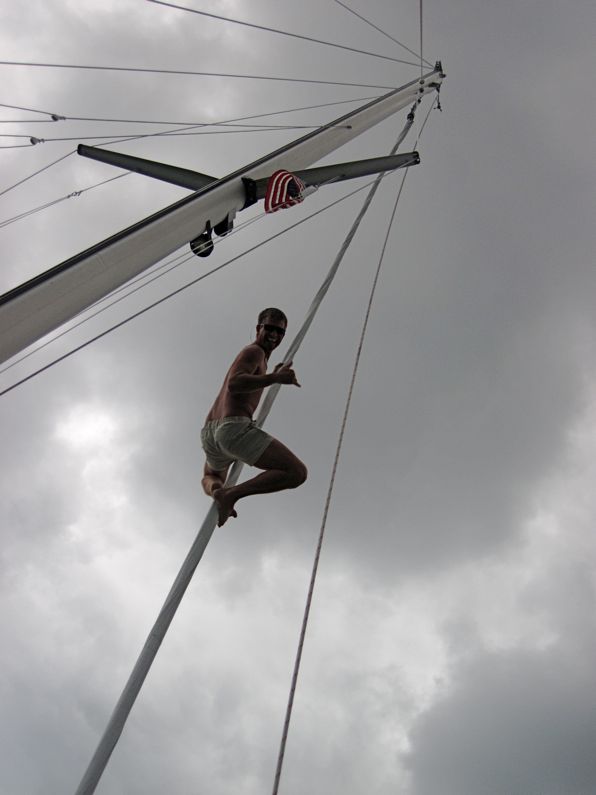 No headsails were harmed during this exhibition. 🙂

Why did we not stay longer in Salinas? As always, our travel plans are largely dependent upon the weather and apparently the relatively benign conditions we have had while transiting the southern coast of PR are about to end with the trade winds expected to fill back in within a day or two. Because we don’t relish the thought of beating into strong headwinds, we decided to get a jump on the weather by leaving early. Guess what? You can’t trick Mother Nature. Although the winds were light enough in the morning, by the time we reached the open water between mainland PR and Vieques, they had increased to 16-20 and moved right on our nose. It’s not like we haven’t experienced that before though, so of course, we kept on plugging through. And we’re glad we did. Just as we rounded Punta Tuna, which is pretty much the south eastern tip of PR, we got a hit on one of our fishing lines. Can you guess what it was? Yes, tuna sashimi makes a great lunch while under sail. If only we’d remembered to buy some more wasabi! 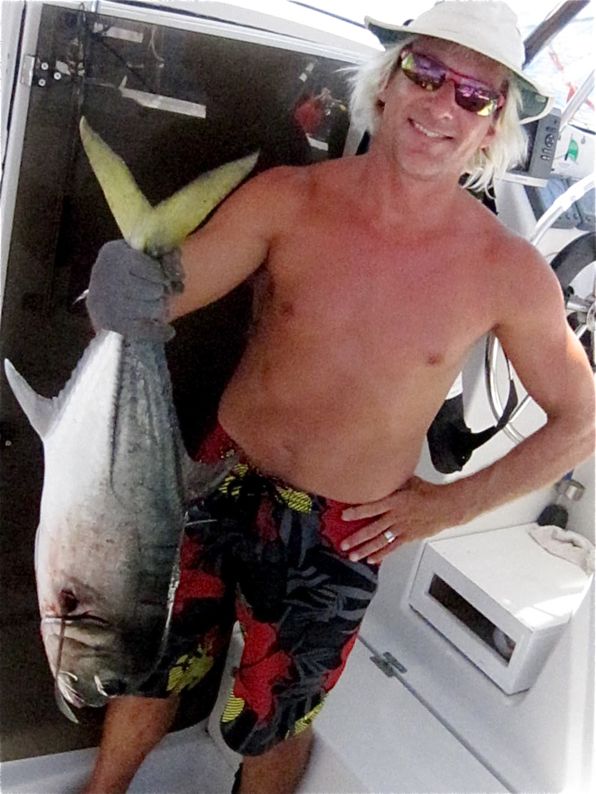 *Marianne complimented Rebecca on the good job that she had done on the one sail patch that we had completed.