Salad dressing for the head

In Carl’s guest post the other day, he described how the head (toilet in this case, although the word ‘head’ could also refer to the bathroom) can be a very fickle beast, and not one that you want to get on the wrong side of.

“The Head – That would be the bathroom, toilet, or crapper to you land lovers. This is a vital and often finicky piece of machinery on a boat. We all have to go eventually. If you can hold it until you are ashore, you should. Let’s face it, you will need to use it. Key advice here. Your hosts are used to dealing with their own crap. If you screw up the head they will end having to deal with yours. It’s likely that your welcome will rapidly run out thereafter. When you get aboard, learn EXACTLY how to operate the head. Be fastidious in your cleanliness and use only when you must.”

Although we have had many comical (in retrospect) issues with ZTC’s head, it is, for the moment, functioning just as it should (knock on wood). One thing we do to keep “the beast” happy is to give it a liberal dose of salad dressing on a regular basis. 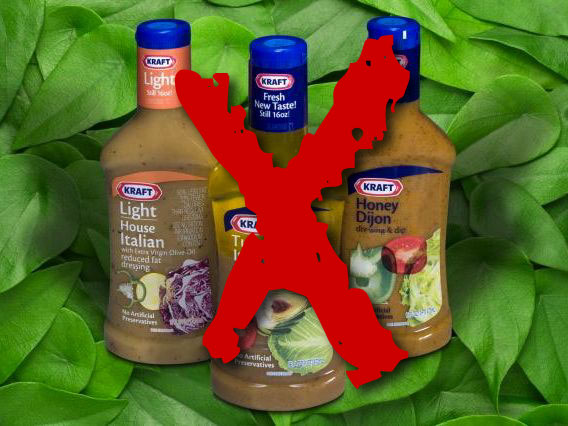 No, not this kind of salad dressing.

Salad dressing? Yes, specifically, oil and vinegar. The Jabsco manual head that we have works by pumping sea water into the bowl and then, with the flick of a switch, flushing the contents into the holding tank. To keep the rubber gaskets and seals in the pump working well, we squirt a few tablespoons of vegetable oil into the bowl about once per week, pumping it through the system. The effect on the pump is immediate. When it needs lubrication the pump will get difficult to cycle and will squeak. After adding the oil it moves effortlessly and is silent.

What about the vinegar? This we add a bit less frequently than the oil but it’s still important. Again, because we are using sea water, the hoses in the head system gradually get blocked off with hard mineral deposits. Although some people use much more caustic substances, we use simple white vinegar to battle this. At a time when you don’t plan on using the head for a while (just before bed at night?) poor a generous amount of vinegar into the bowl. Cycle the pump just enough so that the vinegar gets into the hoses but not enough that it is pumped all the way through the system. Allow it to sit in the hoses for as long as possible before flushing it out completely.

The key point in this system is that we keep containers of both oil and vinegar in the head so that they are handy when needed. I know that if we had to go searching for the stuff elsewhere in the boat, we would be much more likely to procrastinate, lessening the effectiveness of this regular maintenance program. All of the above was shared with us by our friends and it appears to work. If you’re not doing something similar, give it a try. 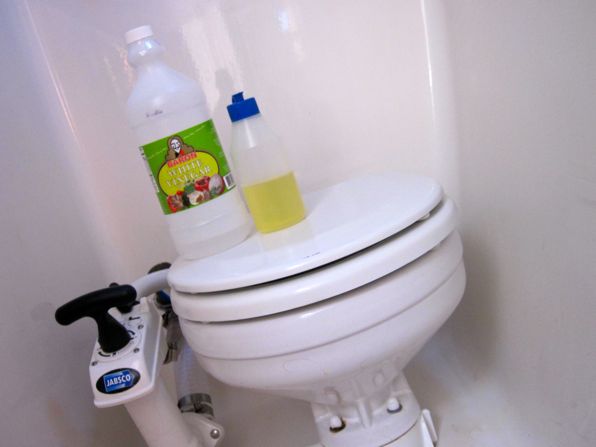 Simple white vinegar and vegetable oil in a squirt bottle, conveniently kept in the head.

The surf to yesterday’s turf