While prepping for the continuation of our journey, we have been giving some thought to the safety systems on board our boat. I wrote the other day how we had inflated our PFDs to check them but with all the activity on board ZTC, I hadn’t had the chance to deflate them, nor to post about the results as I promised. I am happy to say that at least the manual inflation function of the life vests works well, and that they stayed completely inflated for over 3 days. Why not test the auto-inflation function? Because the rearm kit, of which we carry only one spare, costs about 80 bucks! 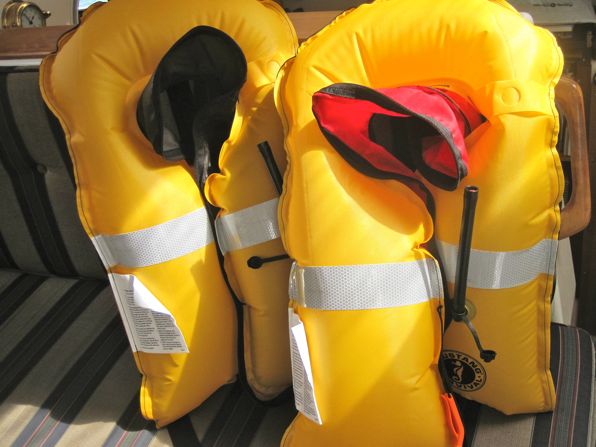 Another thing I wrote about not too long ago was radar reflectors, and how we had never ever rigged the one that came with our boat. I am happy to report that it is now happily flying just below our spreaders, lashed securely with Spectra. Hopefully that should help us at least a bit to show up on other vessels’ radar screens. It sure can’t hurt. 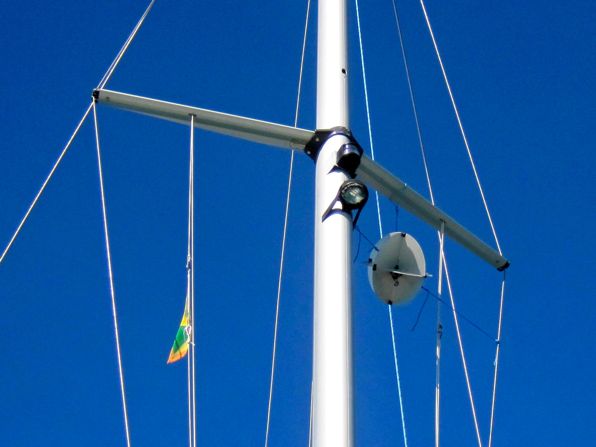 The last piece of kit in this post is more about conforming to the regulations than safety gear but I figured that since completing the Yachtmaster qualifications, I should do my best to make sure that we’re following code. At night, boats at anchor, are required to have an anchor light turned on, either at the masthead or in the foretriangle. Thankfully most people do this. During the day however boats at anchor are required to have a black ball displayed in the foretriangle of the boat. THIS is definitely not so common. I would estimate that only 10% or less of the boats here do so. It’s a cheap piece of kit though and were we in a more litigious spot, I would bet that a case could be made against you should someone run into your boat and you are not displaying the proper day signals. 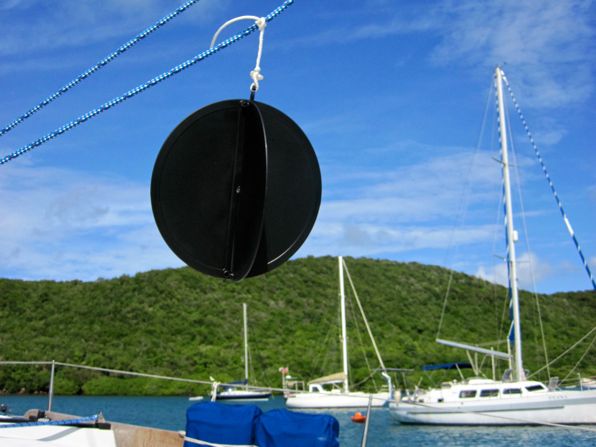 With all this talk of safety, I should mention that the most serious injury I have heard of since cruising just recently occurred and it had nothing to do with boats. Last week a group of cruisers went on a trip to the Seven Sisters waterfalls, similar to the one that Rebecca completed while I was in Trinidad. Unfortunately one woman, a cruiser who we have met and spoken with on a few occasions, was quite seriously injured. Serious enough that it required her being flown back to the US and surgery. It will likely also require several months of therapy for her to recover. Very sad that this happened and equally sad that it’s not the first person that we have heard of being injured in that big jump. I think I’ll be avoiding that now.

UPDATE: November 21, 2011 – Only a few days after installing the above-mentioned radar reflector we took it back down. Even though I don’t think it was at risk of falling, it was in a position to chafe against our main sail, something we could not allow. Back in the locker it goes.

And the new boat name is…

This really scares me!

You could do it too!