Rock – sand, you don’t have to put on the red light!

As a day of riding draws to a close, one where we’re not planning on heading to a motel, we typically have our eyes peeled for a good, no, actually a great camping spot. Even though I wasn’t previously aware of it before starting this trip, it turns out that I have a fairly specific set of criteria for what makes a spot great. Water nearby to bathe or swim in (no, not going to happen in Baja), shade (almost as unlikely, but if the sun is setting, this becomes less and less important as the minutes tick by), a flat spot for a tent (duh!), no bugs (flies, bees), a rock or two to sit on, etc. etc. etc. Yeah, it seems as if I’m rather picky, and I am, but after a long day of riding, I’m also just as likely to say, “Screw it, this place is good enough.” So it was last night. 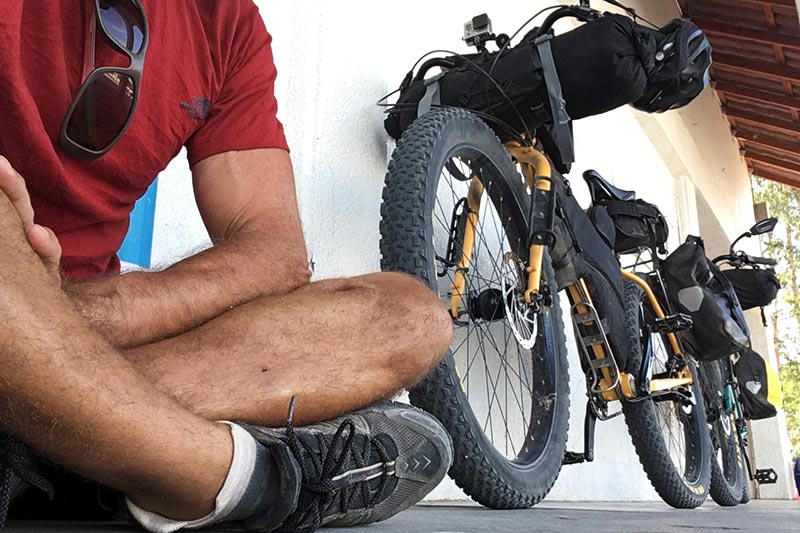 On bike guard duty while Rebecca stocks up on food at the mecardo. 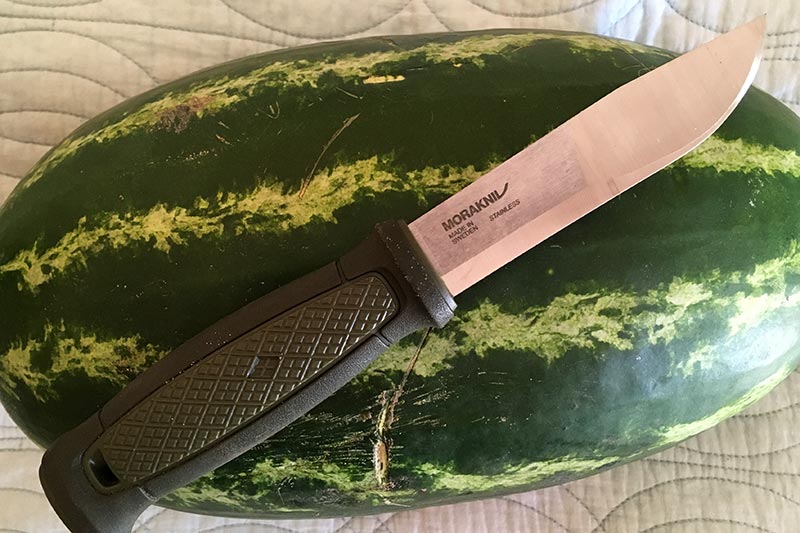 I’ve been carrying this brand new knife with me since California but had yet to use it. Until the other day, that is. On the day before we left Vizcaino, we purchased this watermelon from a man selling fruit out of the back of his truck, and it was the perfect item to christen it on.

We set off from Vizcaino early yesterday morning. Really early in fact, the sun wasn’t even up! We had no illusions of making it all the way to San Ignacio, a 105.6 km trip, but we were hoping to get a fair amount of that milage completed, and we did a good job of it. By the end of the day, we had knocked 85.2 km off that big distance, our biggest day yet, stopping just as the sun was going down. That kind of milage wouldn’t have been possible if the trails weren’t relatively flat and fairly easy. In fact, our only real obstacle was a long stretch of deep sand. We lowered our tire pressure when we got to that spot, and then simply suffered through it. 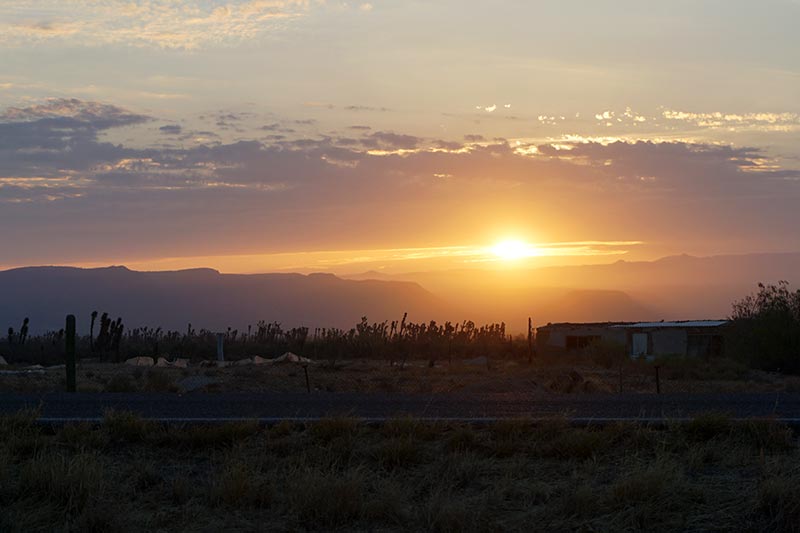 We had already completed about 10 km by the time the sun was making itself visible. 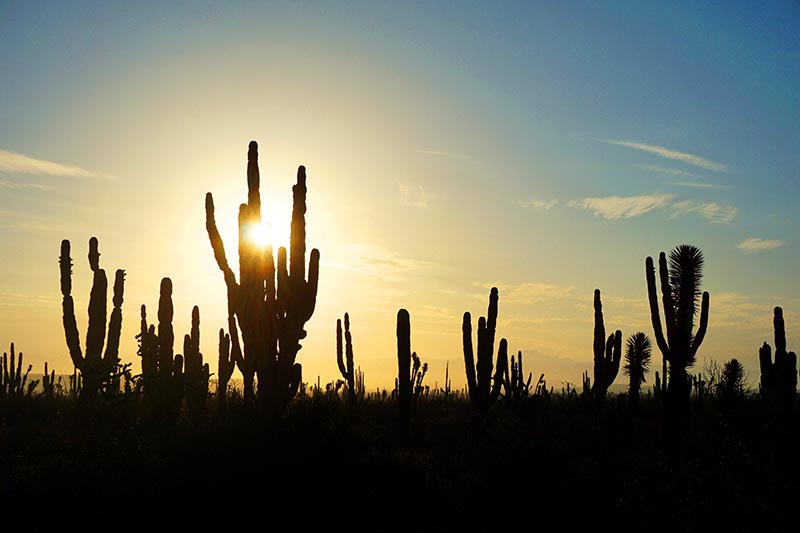 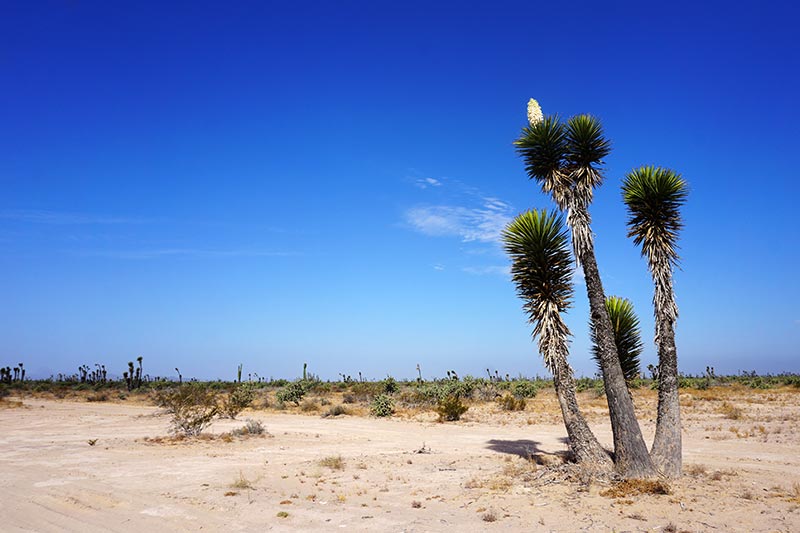 I call these cauliflower cacti because the flower at the top looks like.. you guessed it, cauliflower! 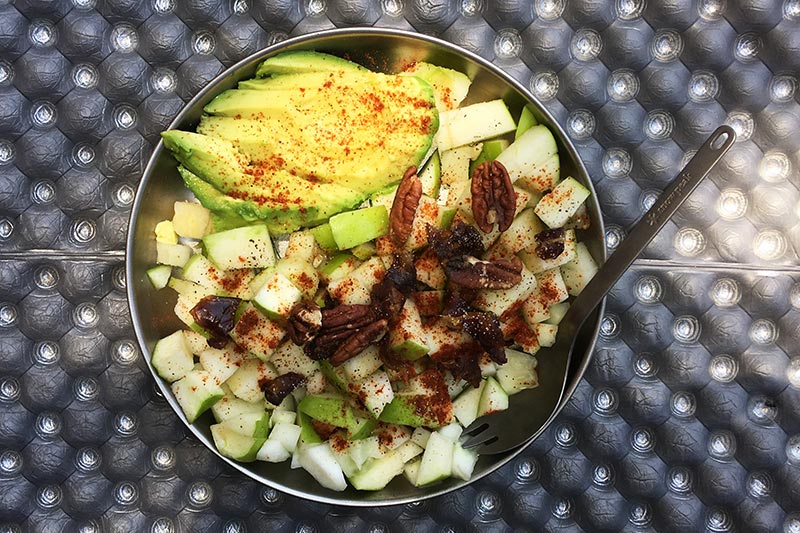 Yesterday’s healthy and tasty lunch: Chili Spiced Apple/Cucumber salad with a side of avocado.

A lot of people asked me how I managed to prepare healthy meals while living on a boat. The truth is, it was not much different than what I would do living in a house, especially when I had both a stovetop and an oven for cooking (we only had a stovetop on our first boat). Now that I am reduced to having to prepare meals with only a small pot and a tiny camp stove, and I have to carry all the food I prepare, it is much more challenging. But, guess what… I am up for the challenge. I have been coming up recipes to try and if they turn out, I will share my creations. Here was our lunch that we had on the side of the dirt road yesterday: Chili Spiced Apple/Cucumber salad with a side of avocado. Yum! – Rebecca 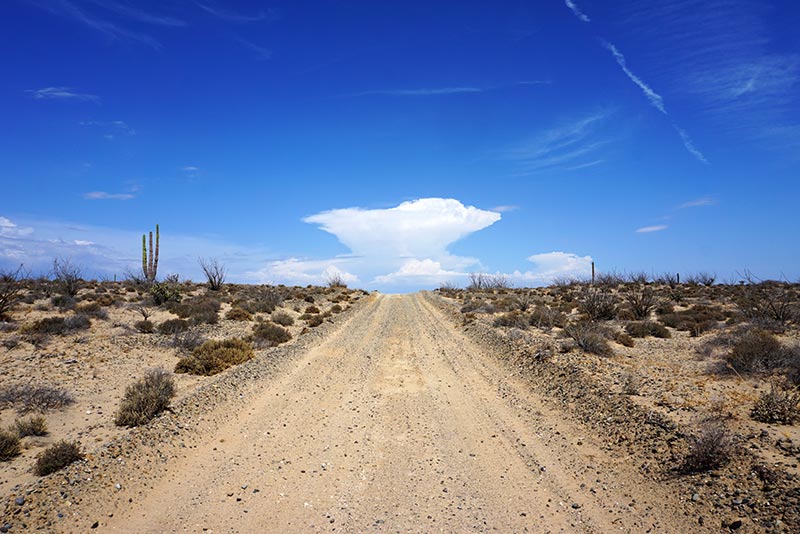 Big-time thunderclouds in the late-afternoon sky. 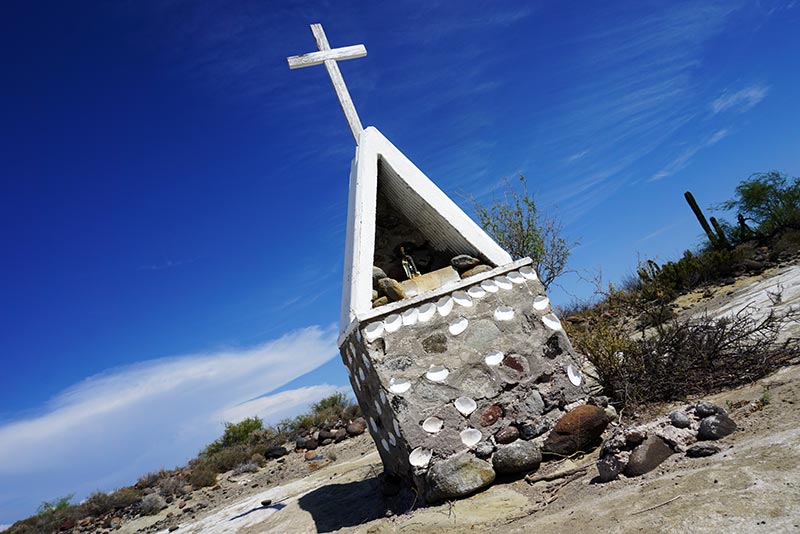 There are religious shrines everywhere. This one was in a (presently) dry stream bed! 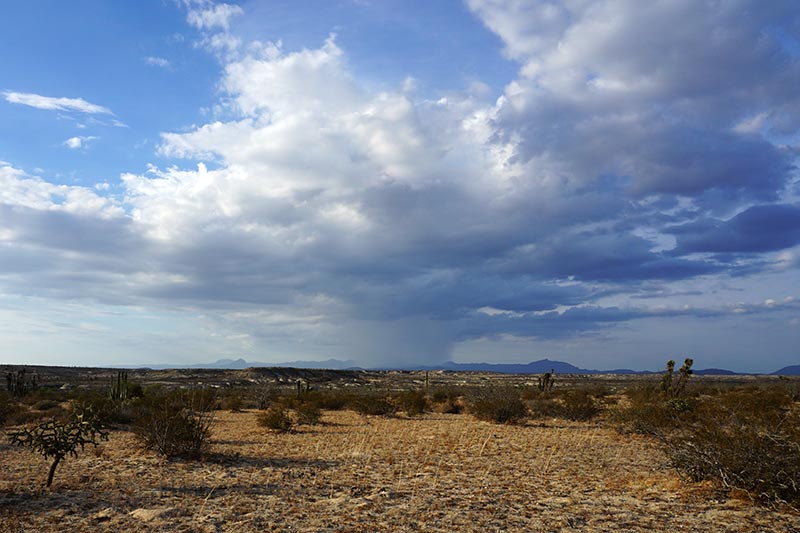 Rain to go with the clouds. We didn’t get any big rain ourselves, but I did “close the hatches,” that means zip up the tent, when I awoke in the middle of the night to find it sprinkling.

Some time ago, perhaps before we had even left the States, I received an email from Ryan Scott from the sailing vessel Waponi Woo, offering us a trampoline to sleep on if we were ever able to hook up with them in Baja. Three weeks ago he followed up with another email restating that invitation, but also to make us another offer. Ryan told us that he had an InReach satellite device that he wanted to loan us, and he also let us know that he wanted to sponsor us with a year of service on the device! He said that this was to thank us for our efforts on the blog, and instead of just paying lip service to this, he actually followed through and shipped us the device the day before we left Vizcaino. How super cool is that?! 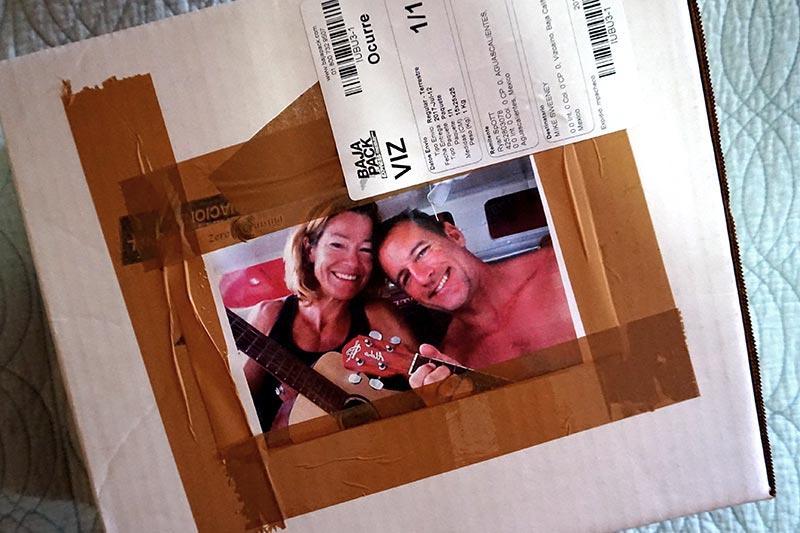 We didn’t need to show ID when we picked up the package.  🙂 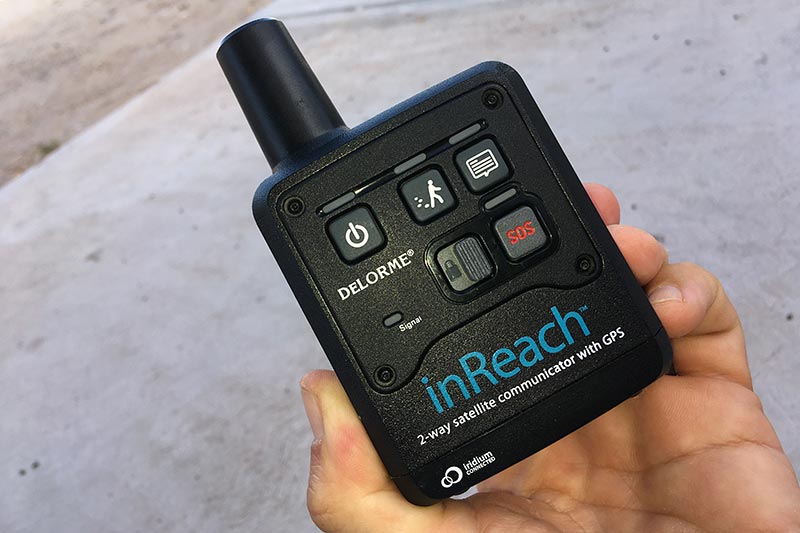 Let’s hope we never need to use that red button!

Those who follow us on Facebook likely saw my announcement of this, and perhaps even clicked on the link to the map that I shared, showing our progress the past two days. If you’re so inclined, you’ll be able to follow along in the future too. Of course, the real benefit to a device like this is that, in the event of a catastrophe (volcano eruption and alien abduction were the two examples that I cited on Facebook), we could call for help. Let’s hope it never comes to that, but it’s a welcome safety net. Huge thanks to Ryan. Your support is appreciated more than you know!

If you scroll around, you can presently find Waponi Woo’s location on this map too!

The camping spot we ultimately settled on last night, 13 miles shy of San Ignacio, was OK. Definitely not great, but we made it work. It was flat, had a nice view of the mountains, a good breeze, and provided us with a beautiful sunset. Coincidentally, it also turned out to be the spot just before the trail started to get stupid. Of course, we couldn’t have known that at the time, but we found out soon enough today when we set off just before sunrise. 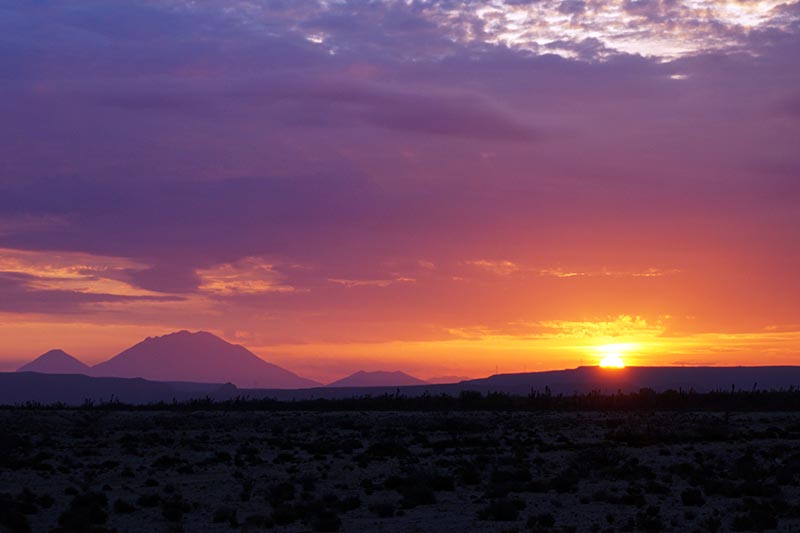 Sunrise this morning, just after we reached the top of the first hills. 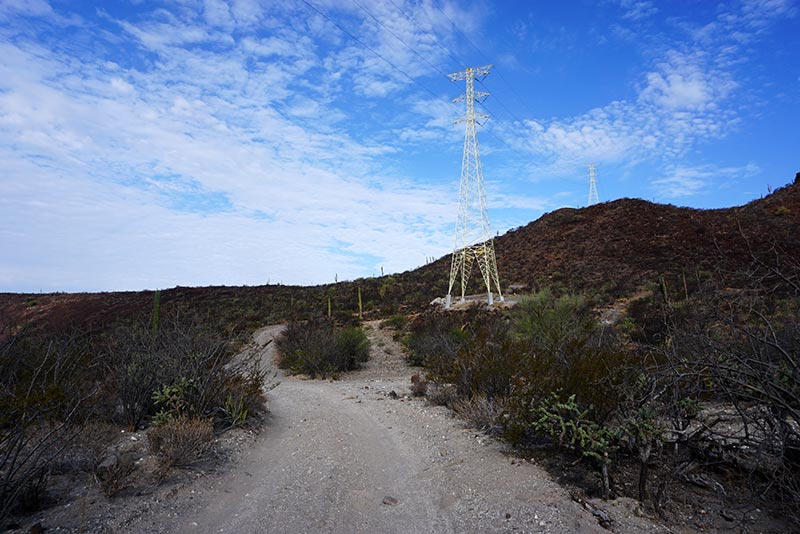 When we saw the first of these towers in the distance we wondered, could it be a cell tower? 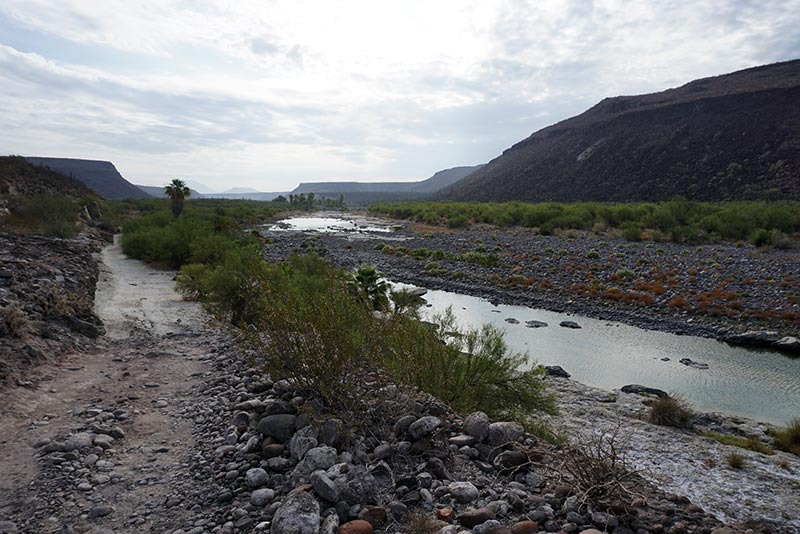 Not long before the perfect camping spot! 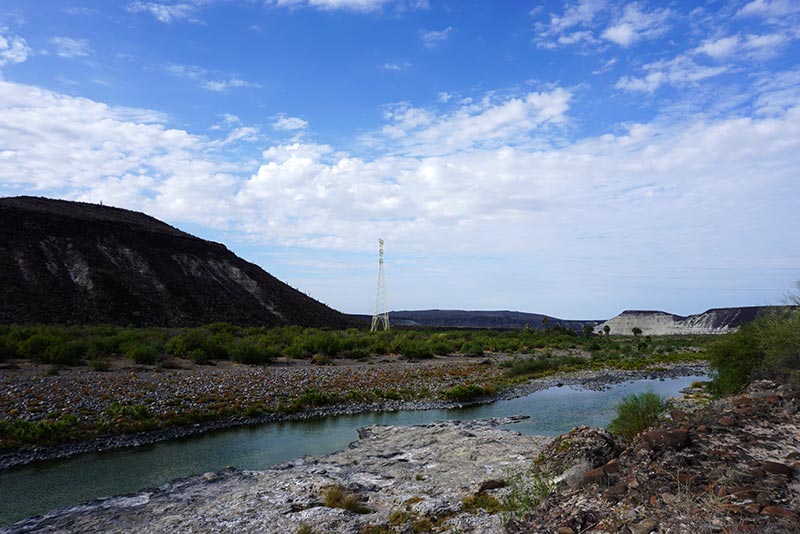 The most fresh water we had seen in Baja.

It’s kind of funny for us to read the trail notes for a particular section, both before and after we have ridden it. In this case, we were warned that “the final mile or two into San Ignacio are difficult to ride.” Funny because we found the 10-13 miles before San Ignacio to be tough, not just the last 1-2 miles!

What made the trail especially difficult was the fact that it alternated between deep, at times unrideable sand, and large, rim-bending rocks. And the trouble with that is we didn’t want to lower the tire pressure for the sand and then risk damaging our rims when it switched back to the hard stuff. Yes, we did start singing Rock-Sand this morning too! 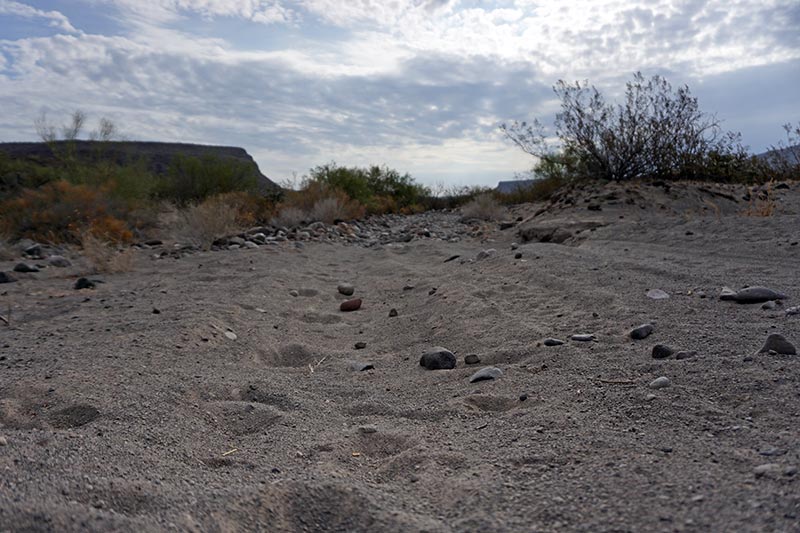 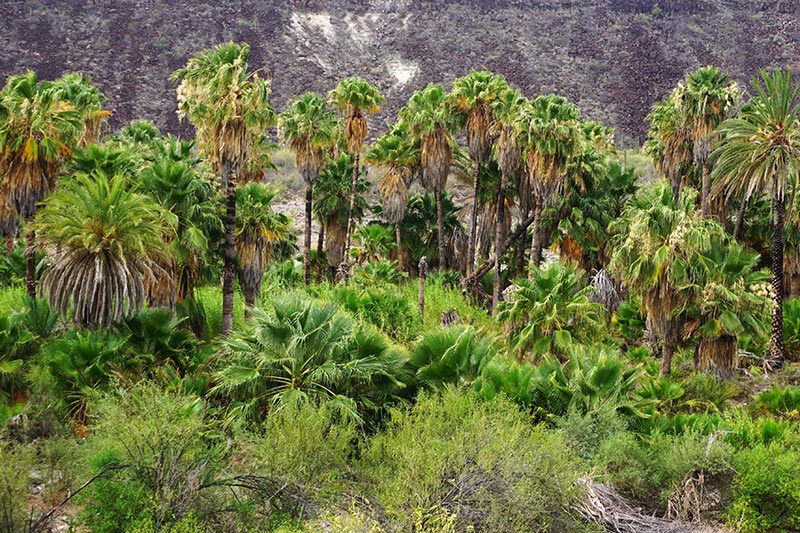 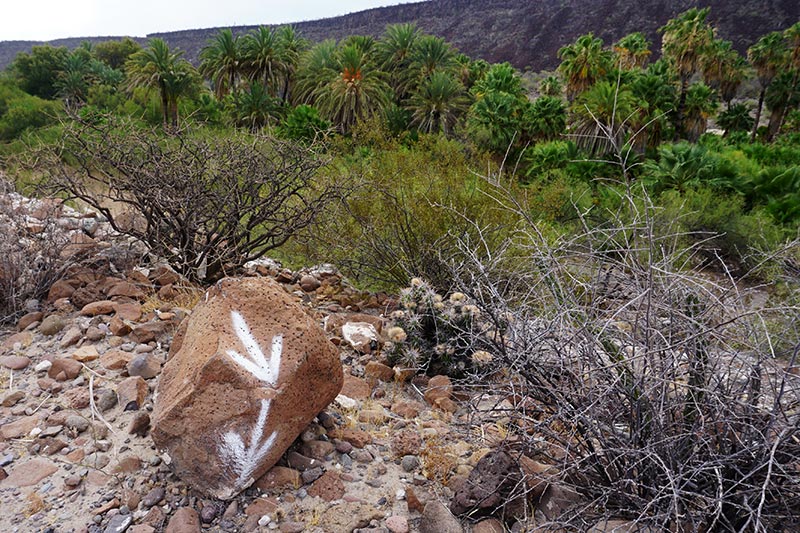 Downhill. Someone had been racing around there, which explains all the boulders on the trail! 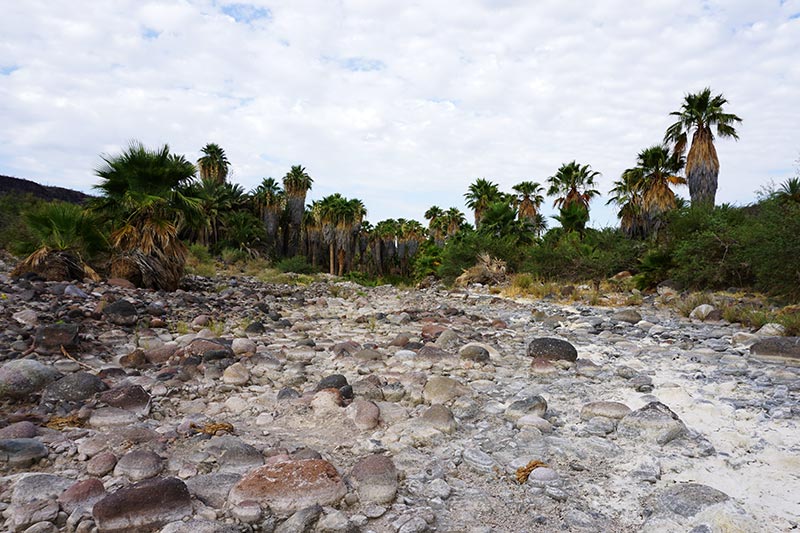 The beginning of when it was supposed to get tough. And it did. Very. Unrideable, even. 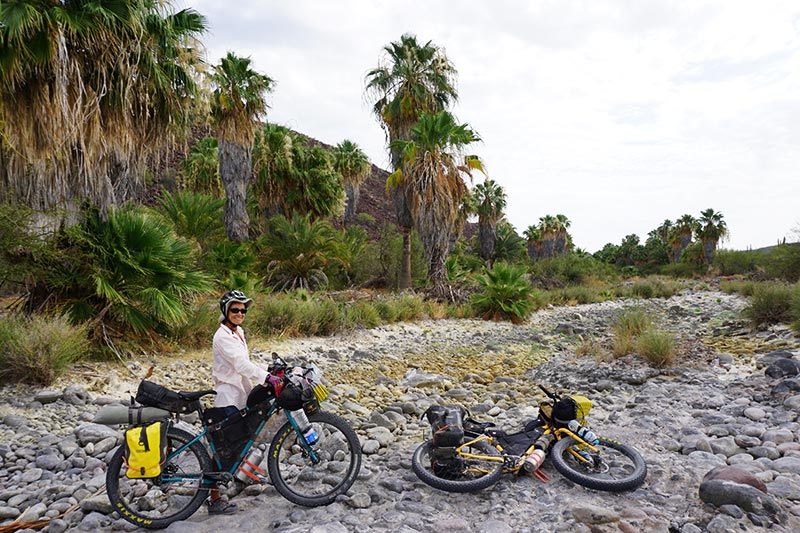 Even though it’s unrideable, the trail notes said that it was pretty, and it was! 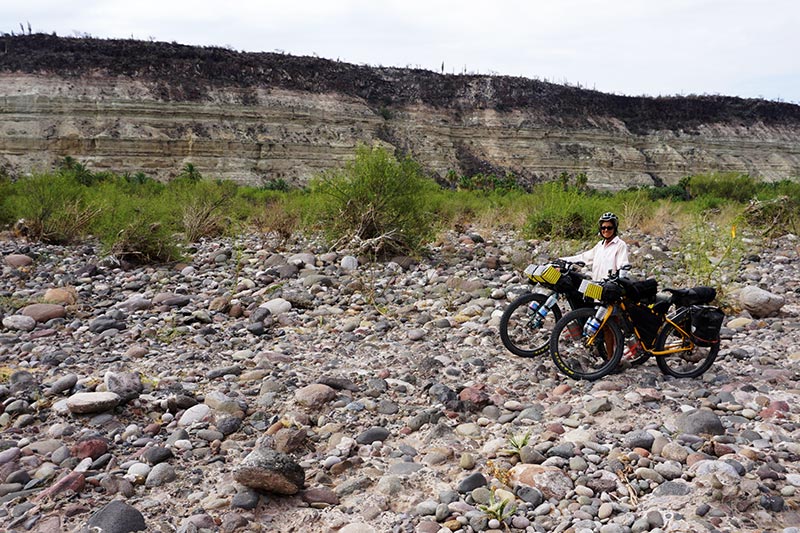 Well, maybe someone could ride this. 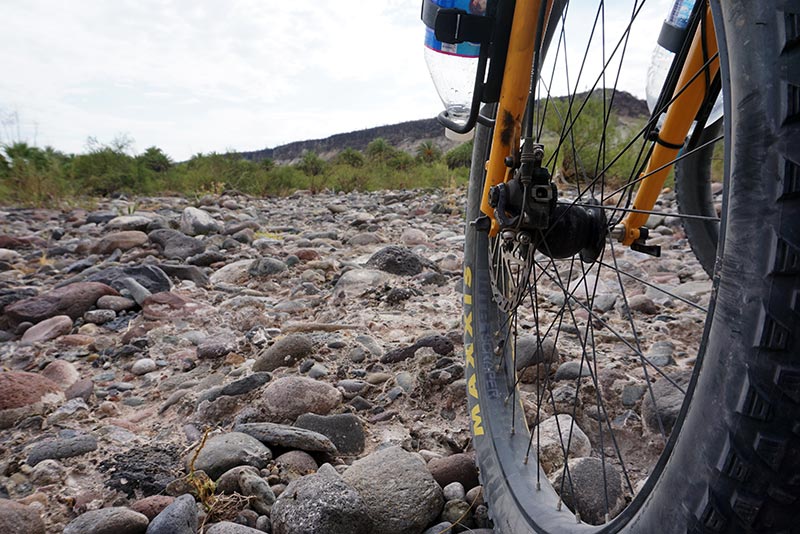 San Ignacio, a literal oasis in the desert, was a pretty big carrot to keep us motivated and moving forward though, and we kept plugging away, knowing that if we just kept moving forward, we’d be there before too long. We were so eager to get there, we even went without morning coffee, hoping to arrive in San Ignacio in time for desayuno (breakfast). Eight kilometers outside of San Ignacio we couldn’t help but laugh when we came across a potential camping spot that would have met all of my difficult-to-satisfy criteria. Yes, it even had water to swim in. Like I said, oasis. 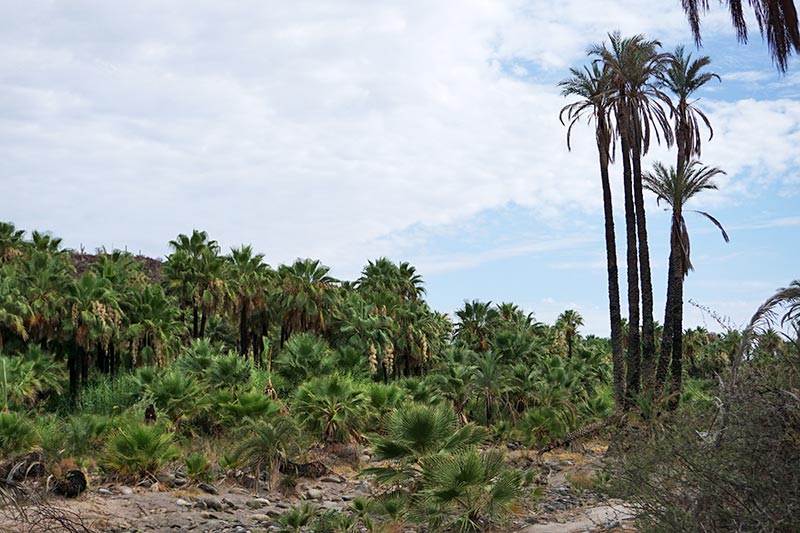 At least the last portion of the trail was rideable. 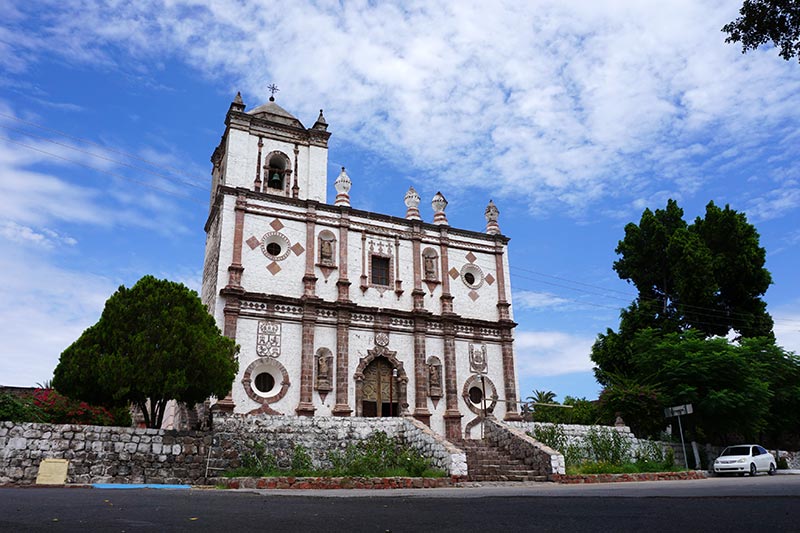 We had breakfast at an outdoor cafe overlooking this historic mission. 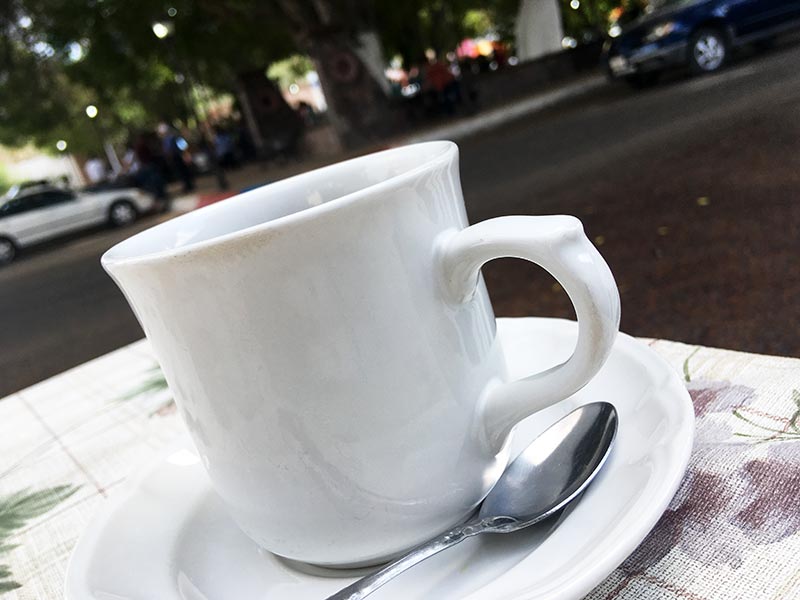 Even the coffee was good!

Some other miscellaneous stuff:

In our last post I mentioned our focus on water. Traveling to where we can get water, stocking up on water, carrying water. There is another thing that we’ve come to value greatly and that is shade. Until we started traveling here, I couldn’t have imagined just how important shade is, mostly because I’ve never been deprived of it. In the desert though, shade is pretty hard to come by at mid day. If you haven’t noticed, cacti are largely vertical, without a ton of overhang. Combine that with a sun that is nearly straight overhead, and you’re not left with a lot of shade. Add to this the fact that even if there was a bit of overhang, both the tree and the ground around it would likely be so littered with thorns that you wouldn’t want to get anywhere near it!

While our end of the day search is focused on camping, our mid-day search is always focused on shade. We are almost always deprived of natural sources of it, which makes us think how nice it would be to have a lightweight tarp that we could rig up to provide us with some shelter from the sun’s rays. That was, in fact, our afternoon conversation yesterday as we sat huddled under a thorny bush. How big a tarp would we need, how would we rig it up, etc. I think we actually had some good ideas! 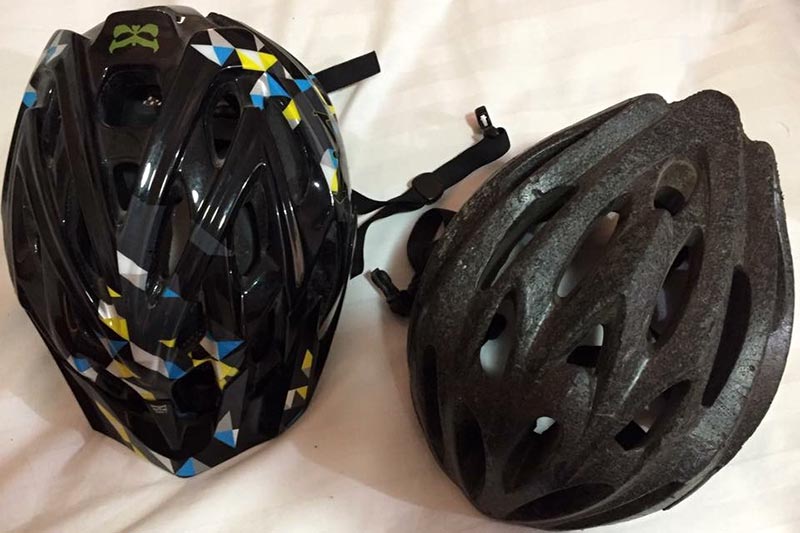 Rebecca’s new helmet on the left, and the only remaining portion of her original one on the right. Somewhere along the trail, the hard, outer casing of her original helmet fell off (when she wasn’t wearing it), and was lost! Fortunately, we were able to find a new one in Vizcaino. 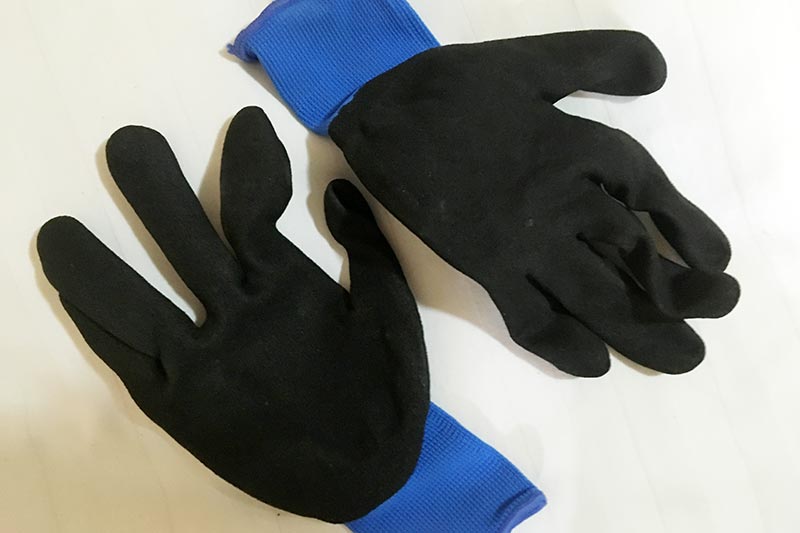 While Rebecca lost part of her helmet, I have lost half of two different sets of cycling gloves! No, I wasn’t smart enough to keep the one glove of the first broken set. Unwilling to fork over 500-700 pesos for another set of gloves, I found these work gloves in a hardware store for only 70 pesos. They were tested fully during the past two days, and get my seal of approval. 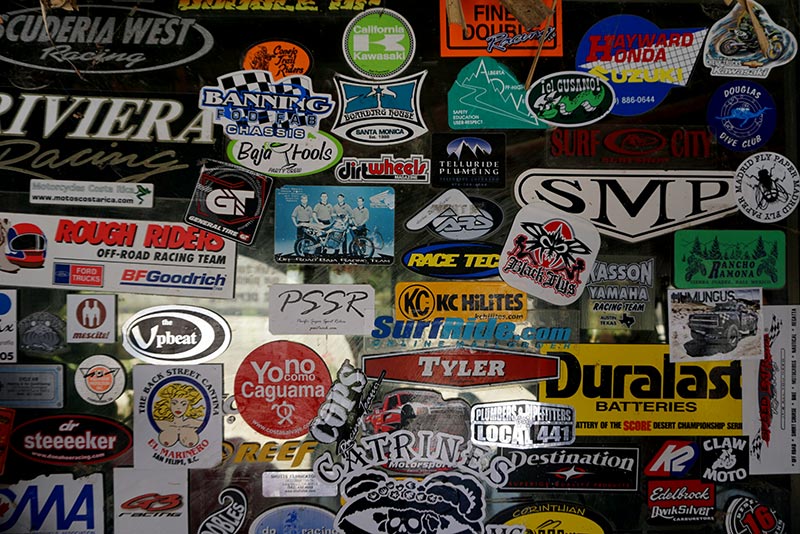 We apparently need stickers. They are everywhere!!!

So long, Mexico. It’s been quite the journey!

Ready to move on, but waiting

Highlights from our time in San Andres Itzapa