When Rebecca and I ran charters in the Virgin Islands, one of the most popular things for the guests to do was to swim with the sea turtles. We knew of several spots where the turtles always hung out, and even had a name for one of the most unique ones (Lucky was his name — he was missing a flipper). Even though we had requests for local cuisine, I’m pretty sure that if we had served up some turtle soup for dinner, after having the primarily North American guests go swimming with them, it wouldn’t have gone over so well. Such is how times change. 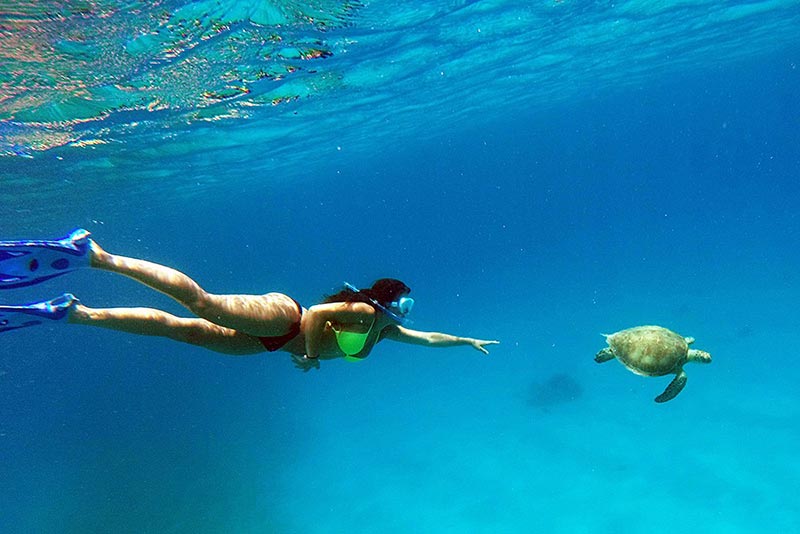 Our daughter Cassandra swimming with turtles off St. Thomas.

What’s on the menu?

Turtle has been traditional fair in many parts of the world (yes, in England too). As you can see in the image below, it is still available in the markets in Grenada. While doing some research for this post, I learned that the hunting season for sea turtles in Grenada is the longest in the world, running 8 months of the year*, and that only the critically endangered Leatherback turtle is legally protected. There is pressure to change that though. 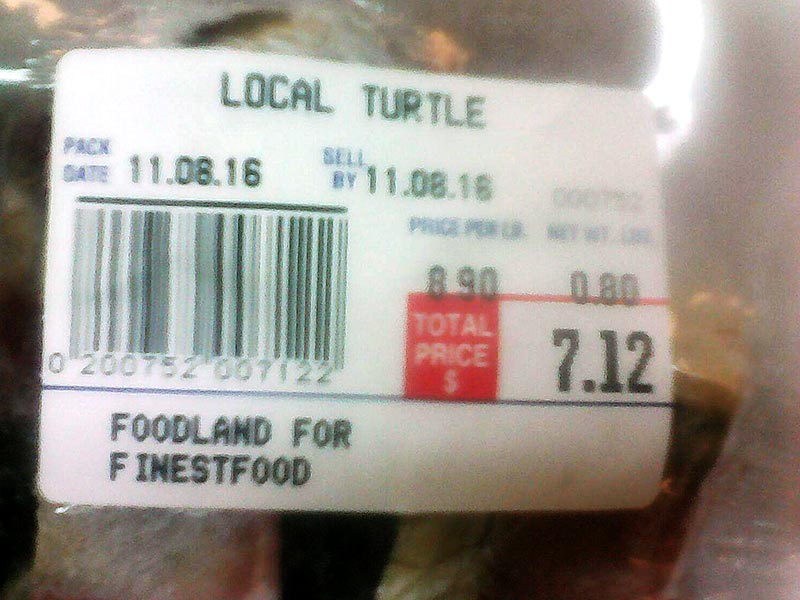 One of the grocery stores in Grenada that we often shopped at when we were there.

I was happy to learn that there are three Grenadian non-profits working on education, and turtle conservation: Ocean Spirits, Specto, and Kido. From the Kido website I found the following:

In the State of Grenada the sea turtle hunting season is closed from May 1st to August 31st, leaving eight months of legal turtle fishing activities. This is the longest “open season” in the world and the pressure put on the seasonal foraging and nesting sea turtle population is enormous. Only the critically endangered Leatherback and all turtle eggs are legally protected, but the enforcement of this legislation is difficult to implement. Occasionally, huge Leatherbacks get helplessly entangled in fishermen nets between March-April, infamously ending their ocean wide journey just before reaching their nesting sites, the beaches of Grenada & the Grenadines. Because the very short ‘closed season’ does not cover effectively the true nesting season of our turtles, many of the catches are nesting turtles that roam along the coastal waters. This severely impacts the numbers of the nesting populations of sea turtles in Grenada and the Grenadines.

Kido began Rescue & Release operations of captured sea turtles in 2002. During the open hunting turtle period, from September 1st to April 30th, a number of turtles caught alive in nets by fishermen are purchased by Kido, measured, tagged and released with the agreement that, if caught again by the fishermen, they are to be released cost free. After tagging & measuring, the animal is released in a safe deep-sea area with no nets in sight, often with the help of Lumbadive staff and within the Carriacou Marine Protected Area.

Kido Rescue Team is conscious not to foster any increase of the local turtle hunt demand. To regulate the turtle purchases, we operate only with fishermen who catch turtles with their nets as part of their traditional livelihood or have by-catch turtles in their fishing nets. It is our experience that, were we not to buy off the live turtles, these would be left to suffer greatly, slaughtered or sent to mainland Grenada alive, on their back, for their final destination in St. George’s fish market, enduring much cruel suffering for several days.

As you might imagine, the dive companies are also far sighted enough to recognize that a live turtle in the local waters is worth much more to the Grenadian economy than one served up on a dinner plate. In fact, just the other day, a couple of local dive operators, ScubaTech and Dive Grenada, took it upon themselves to rescue two sea turtles that were destined for the dinner table. 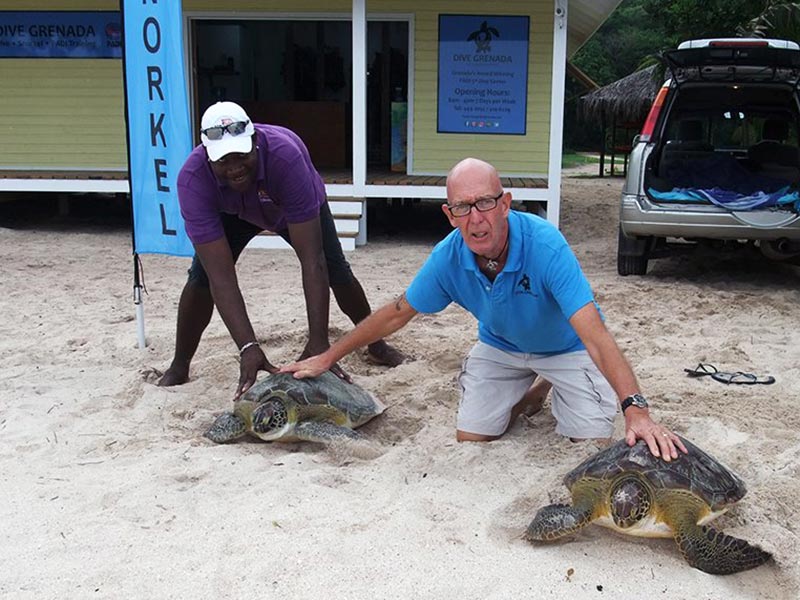 Phil Saye from Dive Grenada releasing two green turtles back into the wild.

Eveline Verdier from ScubaTech shared with me some of the details:

Ted from Aurora (a cruiser) came by the dive shop and told me that some fishermen had caught two turtles (he saw the turtles on the beach at Prickly Bay, just next to ScubaTech). I went over to the Fishermen and asked if I could buy them. They asked 500 ECD for the bigger one (around 200 lbs.) and 400 ECD for the smaller one. They were two green turtles as you can see in Phil’s pic. I told them it’s too much and walked away. Ted made a general announcement on the cruiser’s net and asked if anybody was willing to contribute some money to buy them their freedom. Only one cruiser responded, offering 20 ECD… a little bit disappointing.

Phil from Dive Grenada then called me and said that he would be willing to help buy them if he could take them and relocate them to Grand Anse Beach. I agreed, and we split the costs in half. After some more negotiations, I got the two turtles for 600 ECD. Phil came along, we loaded them in his car, and he released them on Grand Anse Beach. Hopefully some more happy days for these two guys!

Kudos to Eveline and Phil. Much respect! 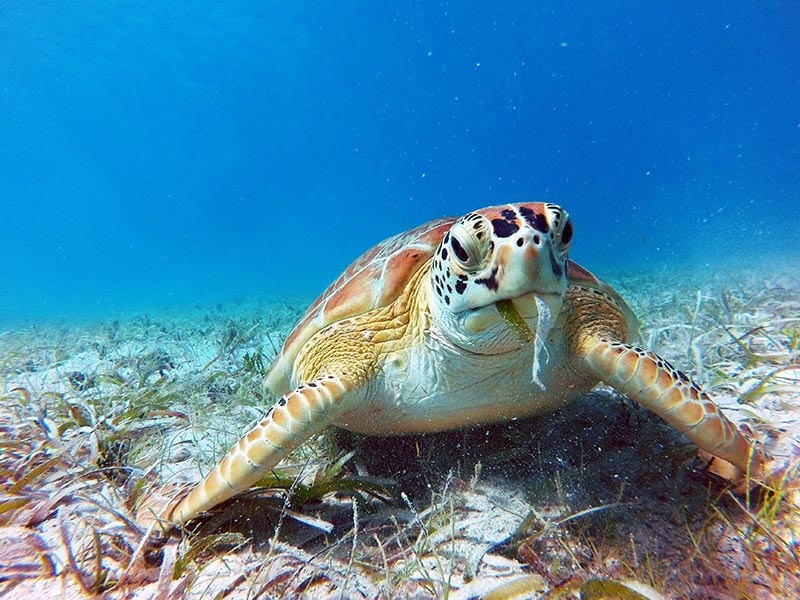 Would you rather swim with me, or eat me?

Who am I to judge?

Some might say that it is wrong for me to judge something that has been tradition in the islands for ages. My response to that is simply this: It’s 2016, not 1816. We now understand how much our actions are effecting the planet, and endangered species are not required for food. Continuing to do something that we know is wrong, simply because it has been done in the past, is a cop out. Don’t get me wrong, I don’t think that the fishermen are bad people. They are just trying to provide for their families, and they have an incredibly tough job. There has to be a better way though, which is why the above named groups are working so hard on education, especially amongst the youngsters.

In case there was any doubt at this point, sea turtles are in danger of extinction:

U.S. – Listed as Endangered (in danger of extinction within the foreseeable future) under the U.S. Federal Endangered Species Act.

International – Listed as Endangered (facing a very high risk of extinction in the wild in the near future) by the International Union for Conservation of Nature and Natural Resources.

As I understand it, nearly all species of sea turtles are endangered, and are listed in the CITES treaty, signed by all members of the United Nations. Although the CITES treaty only has legal status for international trafficking of endangered species, all signatories were supposed to change their local laws to support this.

And it may be happening. St. Vincent and the Grenadines (SVG) will, as of Jan.1, 2017, make it illegal to catch or kill sea turtles, or disturb their nest. That is fantastic news! Perhaps it’s time that Grenada follows suit?