Like many (most?) boats, we use propane to cook with. Propane is also the fuel that is used to heat our hot water, even though we haven’t felt the need to run our on-demand hot water heater in some time. While propane is a great fuel source, it is not without its dangers and thus deserves some respect. Propane is not only very explosive, it is also heavier than air meaning that if a leak develops in the propane system, the volatile gas can build up in the lower portions of a boat. One spark in a situation like that and KABOOM!

Because of this danger, most boats have at least a couple of safety systems in place to deal with the gas. For starters, the gas bottles themselves must be stored outside the living areas of the boat in a vented locker. Vented meaning that if the bottle or hoses attached to it start to leak, the gas will harmlessly vent overboard.

In addition to the above, in order to operate our stove, or the heater that I mentioned, we need to turn on both a breaker on the electrical panel, located in the starboard hull of our boat and turn on the solenoid switch beside the stove in the galley, located in the port hull. 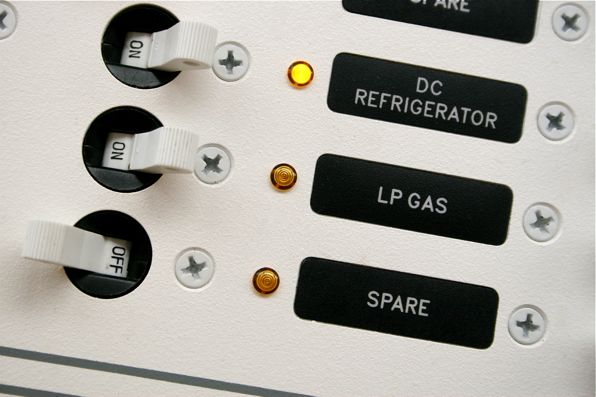 Before you comment on it, yes I am aware that the little LED associated with the propane (LP) breaker is not working. It never has since we bought the boat.

To ensure that we always leave both of these switches in the off position when not cooking, we have developed the following system. When we are through using the stove, whoever is doing the cooking, Rebecca typically, will turn off the solenoid switch first, allowing the flame on the stove to burn out over the course of a few seconds. As soon as that is done, the person cooking will then turn off the burner control(s) on the stove. I know that not everyone does this in that order, some preferring to leave the gas in the system for a quicker start the next time. Our method however proves that the safety solenoid is functioning properly each time we cook which, in my opinion, is a valuable test. After both the burner controls and solenoid have been switched off, whoever is in the galley calls out “propane and burners off,” signaling the other one of us to turn off the breaker on the electrical panel (if the other person is not in the salon, the cook would just walk across and flick the switch off). Is all this necessary? No, but boats do blow up every year from propane explosions and we’d prefer not to have ours be one of them. 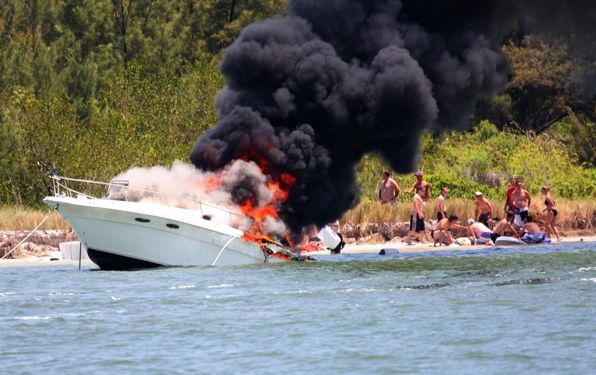 The tragic explosion in the photo above was reportedly caused by gasoline fumes, not propane. The results of a propane explosion would be similar though.

*Some vessels also have a propane detector installed on their boat. We do not.

When boats are dragging towards you, you’ve gotta have balls!

Nothing is certain but death and taxes :(