We remember sitting in Kerr Bay last year, a popular local-area anchorage, listening to the VHF radio traffic. Over and over we would hear people calling the vessel Pirate Jenny. So frequently in fact that we would occasionally joke about it, mostly because NO ONE ever called us! It wasn’t too long before we actually sighted the infamous (to us) Pirate Jenny as they anchored in the same bay as us one weekend. As Sunday afternoon was drawing to a close and Pirate Jenny was raising anchor, Rebecca just happened to be on the trampoline working out with her TRX. The owners of Pirate Jenny slowly motored near us to inquire about what she was doing. 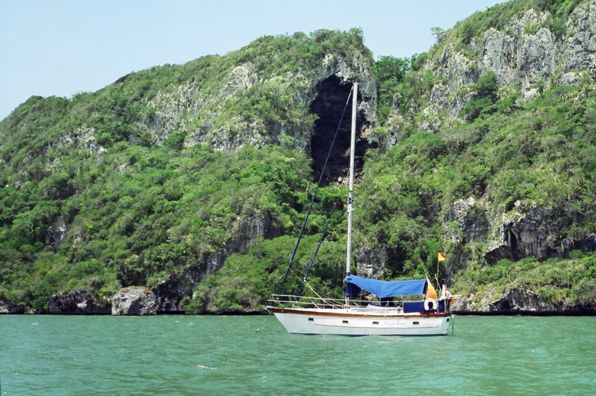 All this took place months ago but we now know why Pirate Jenny, or more specifically her owners Terry and Anneke are so popular. Just prior to launching our boat this year they came by to introduce themselves as they remembered the TRX incident from last season. They have since welcomed us into their home on several occasions, both for dinner and to make use their wide selection of tools.

People often talk about how giving cruisers can be. If these two are any indication of the generosity that is out there then I know we will be well looked after. Thank you guys.

By the way, Pirate Jenny’s previous owners chronicled their travels aboard Pirate Jenny on this website. It is a beautiful vessel!

Our own personal sail loft