After having arrived in St. Lucia yesterday afternoon, we are now officially just one overnighter away from Grenada. It’s funny how each time we consider that our short trip should be easy (yesterday’s journey was only 32 miles – short by recent standards), it turns out to be a bit of work. I mentioned the other day that certain weather forecasters had been calling for 8′ foot waves. Well we found out where they had been hiding, offshore between Martinique and St. Lucia, right along with the 20-25 knots of wind.

The weather yesterday was excellent for sailing, even if it was coming from pretty much the direction we wanted to go. We had all day to make the trip though so we were happy to enjoy our time out on the water, without running the engines. As the day progressed, the wind and waves continued to build, ultimately breaching the 20 knot mark which is typically when we would begin to shorten sail. We held off though because we were pinching so much, our speed was being limited. It was the waves that ultimately forced us to reef though as our autopilot started to groan when the waves came around and started slapping us on the beam.

Just as the sun started getting lower in the horizon, we found a nice anchor spot just off the beach in Rodney Bay. It was too late to clear customs yesterday so that’s on the agenda this morning. What will follow that we’re unsure. I do think we’ll hang around here a couple of days before we head any further south. 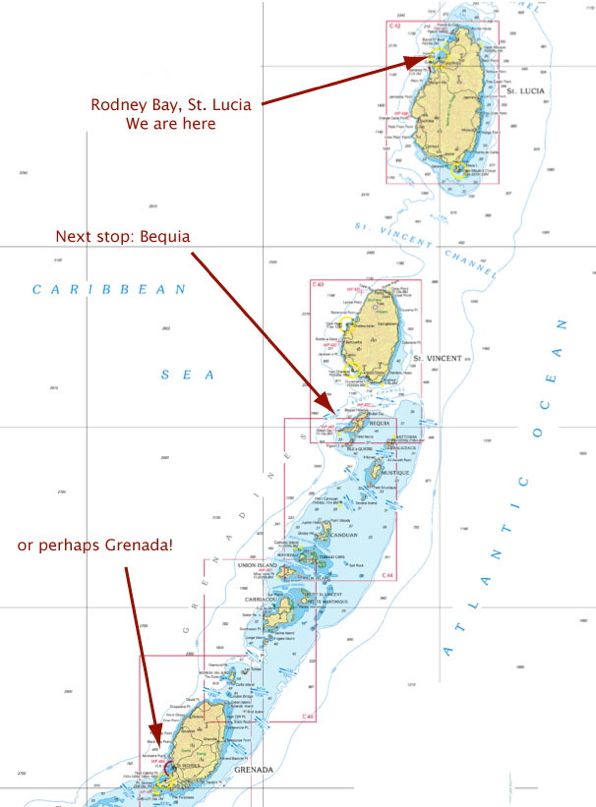 Applying epoxy in the dark

We had a low-power evening last night