Could one man’s misfortune be another’s opportunity?

There was a point during Wednesday’s drama-filled passage, I believe it was just after we had changed course to head for Ronde Island, that a bolt of lightning struck the water directly in front of us. It was at that point that both Rebecca and I were actually expecting our boat to be struck. It’s an awful feeling, believe me! I recall that during the tense moments that followed, thinking about several friends who have had to deal with the aftermath of lightning strikes, some of them quite recently.

Among the folks I was thinking about were Bill and Joanne, a couple friends of ours who sail on a large custom trimaran named Ultra. Back in August they were struck while cruising in the San Blas islands. They commented that they got off easy, and that the damage to their boat did not total in the 10s of thousands of dollars. That’s good news, because many are not so fortunate.

Read about our only lightning incident.

Some other friends, John and Holli, who sail on a Lagoon named Shiloh, had the misfortunate of being struck twice, in 9 months! Yes, that’s right, twice. Shortly after completing the repairs to their boat from its first strike that occurred in Florida, they were actually hit again while at anchor in the Bahamas. Crazy, right? 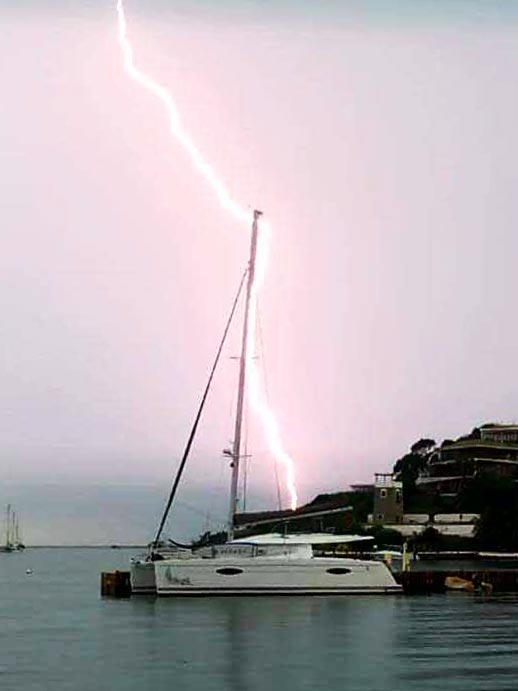 Our friends’ boat on the LTD Sailing dock, with lightning in the distance.
Photo taken by Jack Turquand Wednesday while we were sailing.
Note that this boat was NOT hit! It’s just an awesome photo.

Most recently our friend John has been the object of Mother Nature’s fury. His boat, Stingo, a 2007 Maxim catamaran, was struck in Panama. This is particularly unfortunate for him because he had just listed the boat for sale, planning to give up cruising (for now) and return to the UK.

An opportunity for someone!

I spoke to John about this, and he appears uninterested in investing the time to repair the boat himself. Ready to move on, John has simply lowered the price of the cat (a lot!), offering it for sale as is, where is, to someone who wishes to take on the project*.

While it’s been some years since Rebecca and I have been on Stingo, I remember thinking that it was the perfect size for a couple like us to cruise in. Also, as John is a single hander, I’m sure he has it pretty tricked out for someone who wishes to go it alone. I don’t know, John’s misfortune might just be someone else’s opportunity. If you’re handy, and looking for a deal on an owner’s version of a relatively new cat, send John a message. And let us know if you do. I’d like nothing more than to know that we helped put a couple people together in a potentially win-win situation.

*According to John, the initial estimate is that repairs would be less than $15k for someone who does the work themselves.

We want some ZTC swag

We’re not running away