For more than the last month, Rebecca and I have been living out of a carry-on. And I should say, Rebecca wasn’t overly impressed by what I packed for her in her bag! All that ended yesterday though when we received the rest of our personal effects, picking them up from the Tropical shipping dock here in Grenada. What follows below is an outline and cost breakdown in case anyone else finds themselves in a position to have to ship things from island to island (or from the US to an island in the Caribbean). 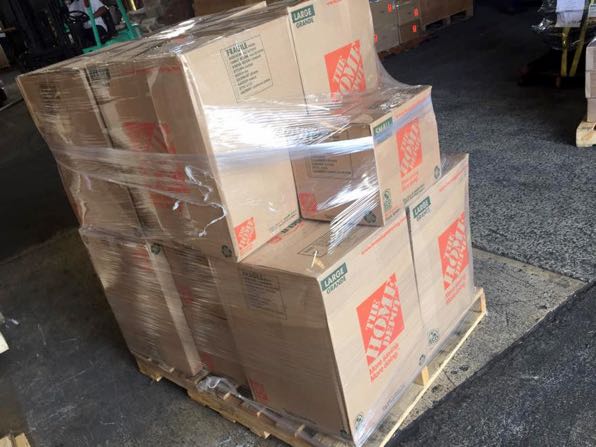 Until yesterday, this was the last we saw our stuff.

With the help of our friend Jim, we purchased boxes from Home Depot in St. Thomas and packaged up all of our stuff. Prior to that, we had visited the Tropical office to find out the dimensions of a pallet (4′ x 4′ x’ 5′ H) so we picked up boxes that would fit well within those dimensions (some large and some small). We made sure to write the “shipped from” address and the “shipping to” address clearly on each box. We then delivered them to the Tropical dock in St. Thomas where they were assembled onto a pallet and wrapped in plastic. We prepaid for our shipment and as it was 761 lbs., we were charged approximately $550.00 US. That took place on April 26th and until yesterday, was the last that I saw our stuff.

We learned that the ship does not go straight to Grenada from St. Thomas. It actually goes to Florida where the goods are offloaded, resorted and placed onto a different ship for the transit south. We were able to track our packages, both to Florida and then to Grenada, through the Tropical website. The ship with our stuff on it landed in Grenada on Friday, approx. 4 weeks after we dropped off our stuff. Note that we had just made the cut off time in St. Thomas by an hour or so. If we had gotten there any later, our shipment would have been delayed another 10 days, I think.

We received a phone call last week (our friend did actually – I had used his address and phone number) telling us to come to the Tropical office and get our paperwork. The ladies working there were very friendly, and we were in and out in less than 10 minutes. We were told to wait until we received another phone call, and when we did, to take the papers that we had been given to the port.

Monday was a holiday here in Grenada so the offloading of the goods was delayed a day or so. It wasn’t until yesterday that we received that call. Even though we had our friends’ car, we were extremely concerned about how long it was going to take us to ferry our stuff from the docks to the house where we are staying. It definitely wasn’t going to happen all in one trip, and our friends are off island (conveniently 🙂 ) so we were on our own as far as labor. Oh well, we’d make it happen anyway.

When we arrived at the entrance to the port, one of the guys standing outside directed me to a window to go to get a pass to get in. While there, another young man started gesturing to me. The first guy I spoke to told me that his friend couldn’t speak but was asking if I needed help with transportation with our stuff. They pointed out their pickup truck and I said Yes, I do need some help! What followed was some of the best assistance that I have ever paid for. The young man, without needing to speak a word, led me from place to place in the port, helping me to get all of my documents organized. He had obviously done this procedure countless times. Additionally, once inside the gate, we were met by another man who said that he could help with the paperwork. When I asked him if I needed his help, he said yes, I think so. 🙂 When I asked him how much his help would cost me and he suggested $20.00 (EC$, about $8.00 US), I told him we had a deal. With the help of these guys, clearing the goods was a snap.

I admit to being concerned about paying a bunch of duty on the stuff we were bringing in because with only 1 or 2 exceptions, everything in our boxes had already been in Grenada before. It was simply stuff that we had sailed onto the island via ZTC and then offloaded onto One Love. I don’t know whether we made out OK with the duty paid or not, but I was happy enough to simply get our stuff. 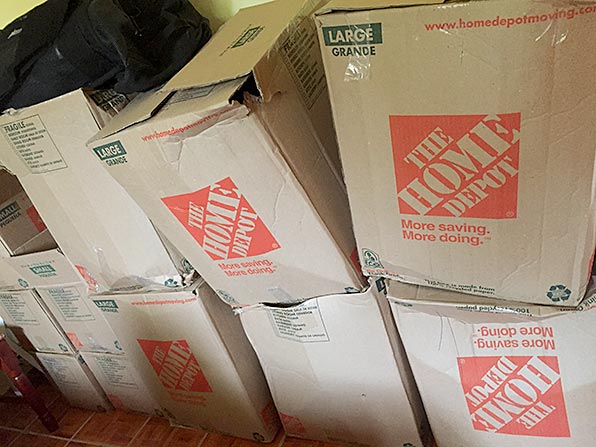 We now have our STUFF!

The first guy I spoke to and the young man who had been helping me ultimately brought their pickup truck into the yard and after everything was said and done, they loaded the boxes onto their truck. Leaving the yard, they followed us to our friends’ house and then helped to carry all of the heavy boxes down the steep hill to our door. What was that help worth? Priceless! The following is the breakdown of what we actually paid to get our stuff out of the port and to the house:

Add to this the shipping cost and the money for the boxes, I guess we’re a little over $700.00 US, and a bunch of sweat. Worth it? Definitely.

Not a yacht-listing service, but…

I know I’m not the only one!