Some stuff just doesn’t work the way you want it to. Here’s a few examples from the past week:

1. After a successful round of bottom scrubbing back in Virgin Gorda, I was inspired enough to attempt to change the sacrificial anodes, aka zincs, on our two outboard engines. The anodes are placed on the lower unit of the engines to prevent against corrosion caused by dissimilar metals or stray current. Anyway, we have never changed these since we bought the boat and although I thought they still looked relatively intact, I decided to try my hand at swapping them with the spares that we had previously purchased. Now, because these engines are under the boat, and we have no access to the lower units from inside the boat, it required getting in the water with a ratchet to do the job. Part of the reason why I chose this time to make the switch was that we were in shallow enough water that if I dropped something, I could dive down and get it. Also, the water was clear enough that if I did need to dive down, I could actually see what I was looking for. In spite of that, I was still being extra careful, starting with tying the ratchet around my wrist with a piece of cord. The job seemed to be going well (too well?) as I was able to unscrew the first zinc, and swap it with a new one, all without dropping anything. In fact, I didn’t even notice that anything was wrong until I found the bolt head stuck in the socket. Yes, I had sheered the bolt head right off while tightening it, and it was a super clean break. Doh! Oh well, lets not do that to number two then. Nope, number two was worse. I sheered the bolt off in exactly the same way, only this time I did it while trying to remove the old zinc. Double Doh! Now we have an engine with one new zinc and another with an old zinc, both being held on by broken bolts. I am not looking forward to trying to fix this and it’s definitely going to have to wait until we pull the engines for servicing while in Grenada. 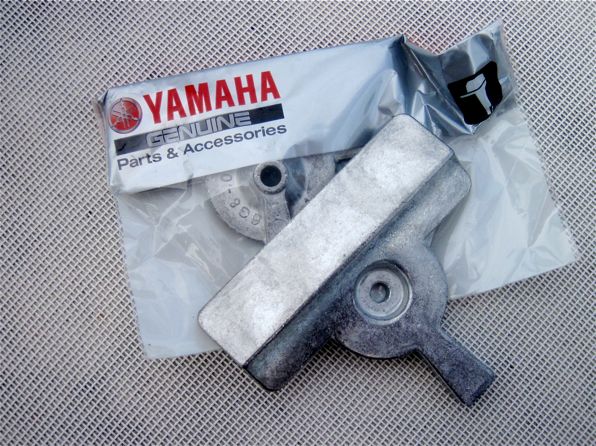 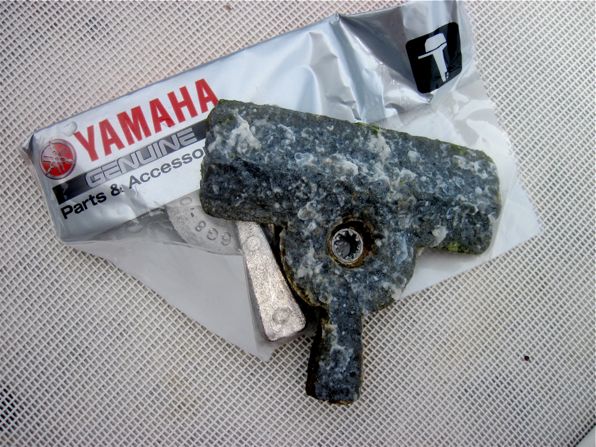 2. Just before raising anchor the other day to set sail from Guadeloupe to Martinique, we decided to take one last dip in the water before the passage. As we normally do, we had just started the engines to let them run for a few minutes to warm up. After jumping off the stern though, I just happened to look under the boat to see that only one of the two engines was “peeing.” Yes, there was no water shooting out of the starboard engine, which is a bad thing. We quickly turned off the engine and with a bit of troubleshooting, found that apparently the cooling water output must have been clogged with some salt (or whatever). I had read about this happening. I removed the hose from inside the engine and poked a small stick (a tie wrap actually) in there to clean it out. After replacing the hose and firing the engine up again, we were pleased to see that it was once again working. Probably the easiest repair job we have ever done, but only because we caught it when we did. The weird thing about this is, if we hadn’t have jumped in the water at that time, we never would have known. That could have been really bad! Lesson learned… we have added looking under the boat to confirm cooling water output to our list of start-up items.

3. Each boat at anchor must display a 360 degree white light. The Collision Regulations specify how bright the light needs to be and up until recently, we had one of the brightest. That is, until it stopped working. Our friends had commented on a couple of occasions that they could see it flickering, often after a rain storm, and we had noticed it as well. The other day though, it just stopped working altogether. Our troubleshooting began with the easy stuff, at deck level, instead of way up in the air. All of the wires that run up our mast terminate at fancy Aqua Signal “waterproof” receptacles on the deck. Flickering lights often result from bad connections so I hoped that if there was one, it would be easy to spot inside the plug. Was it! Upon opening it up, I found the plug caked with salt and corrosion and one of the five pins even fell out into my hand. Problem located. It was the pin, or so I thought. We even decided to delay our departure from here so that we could visit the chandlery today to purchase a new plug. Guess what it costs? $140.00, or perhaps even more. Before we handed over that kind of money, I wanted to be sure that I even had the technology to be able to swap it out. So yesterday afternoon, Rebecca and I set about taking the current one apart. It was then that I discovered that one of the wires had broken right off. Was that the problem instead of the pin? I believe so. Only 4 of the 5 pins are actually used and further observation seemed to show that it was the unused one that broke. I had high hopes that simply reattaching the other wire would fix the problem but sadly, last night we had to resort to using our backup anchor light again (good thing we have one). I’m convinced I can fix this though so we’ll be putting off the $140.00 purchase for another day, or hopefully never. 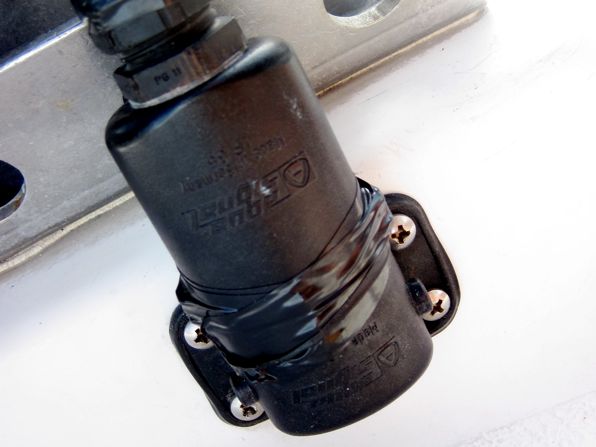 One hundred and forty dollars for this! 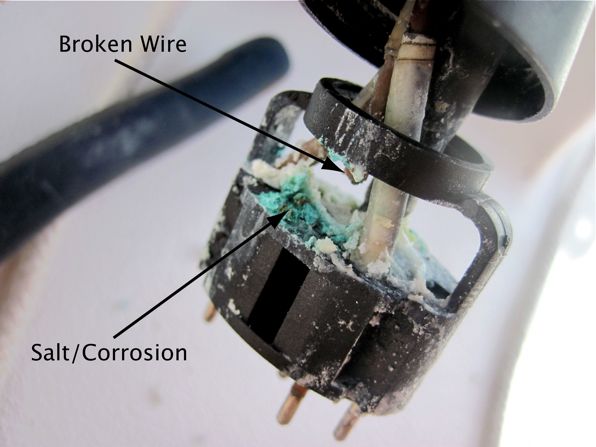 Yeah, this doesn’t look all that good. Good thing this plug was waterproof!

4. And speaking of things that aren’t working, I think I’ll throw our Martinique guide book into the pile. We’re a little tired of guidebooks that read like diner’s guides. Some of that info is nice but there is infinitely more important data that cruisers need to know instead of where to get a lobster dinner. Such as where to get fuel for example. Yesterday morning, we raised anchor and motored the 2.5 miles across Fort de France Bay to Anse Mitan, partly for a change of scenery but also to fill up on fuel. The guide book listed a marina with fuel there so we thought we’d kill two birds with one stone. Nope. The fuel dock is gone. Gone! OK, no sense staying there then. We’ll head to the other fuel source listed in the guide book, back on the other side of the bay. 2.5 miles later, just around the corner from where we started the little journey, we found the spot he was talking about. Some of you might be familiar with those little prefab plastic floating docks and that’s exactly what we found, about a foot or so out of the water. Lets just say, there was no way we were going to even attempt to tie ZTC up to that P.O.S. in the 18 knot headwind that we were experiencing at the time. Who needs fuel anyway? We have a sailboat after all. This is a perfect example of why the Active Captain website is so awesome. I could easily log on to that site and add this data and then interested users could get real-time info on what’s really out there, instead of info from a book that could be years and years out of date (even though the guidebook I am talking about is the 2009-2010 issue).

Anyway, we’re off to St. Lucia today, 32 miles south of here. We’ll check in later on, if we don’t run out of both wind and gas that is. 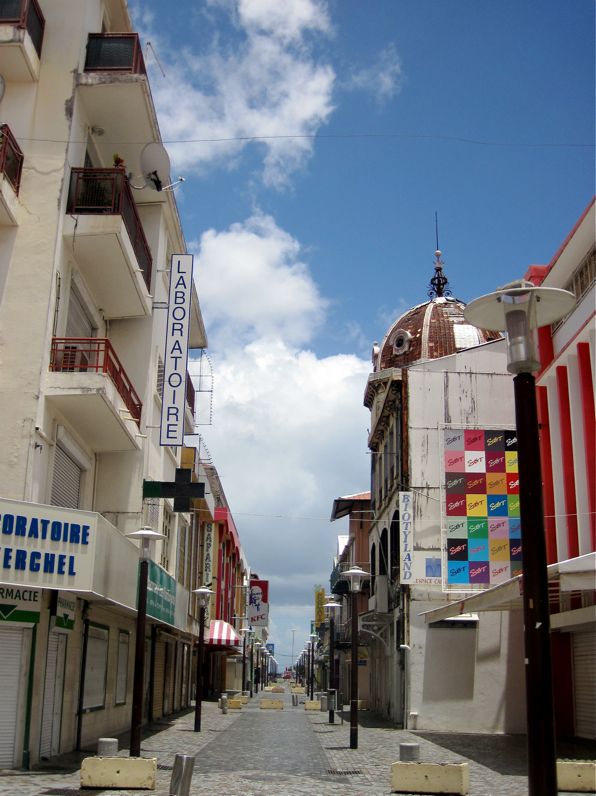 Remember those busy little streets that we showed? Same streets, no people.
They close up EVERYTHING on Sundays! 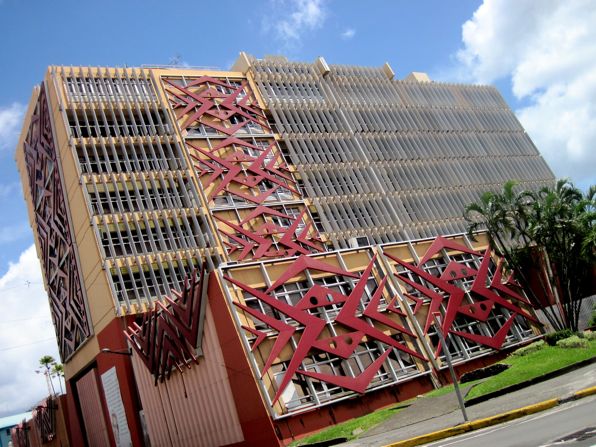 No idea what this building is but I like it. 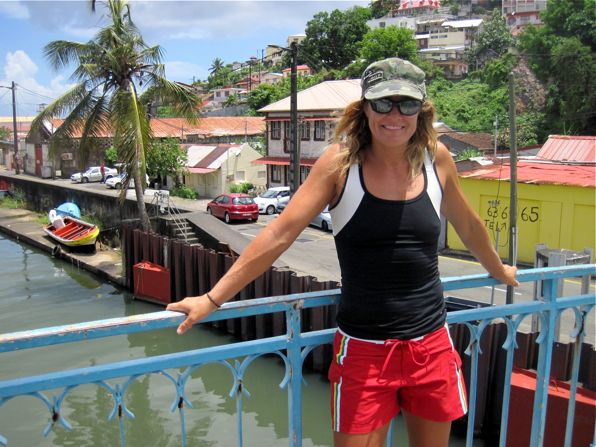 Bridge over some not-so-nice-looking water. There were still fish jumping around in it though. 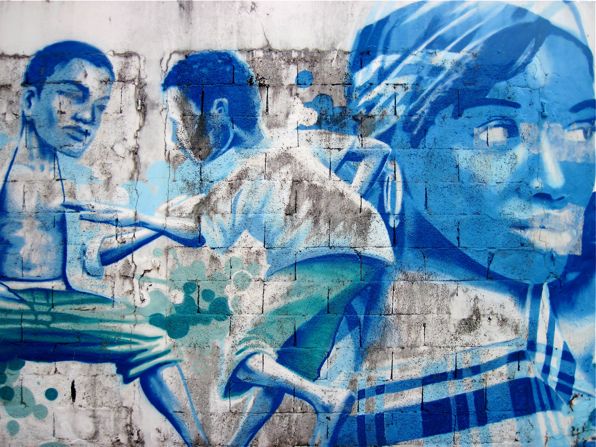 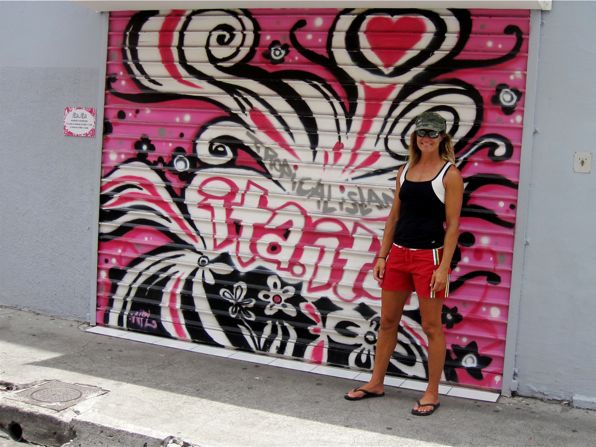 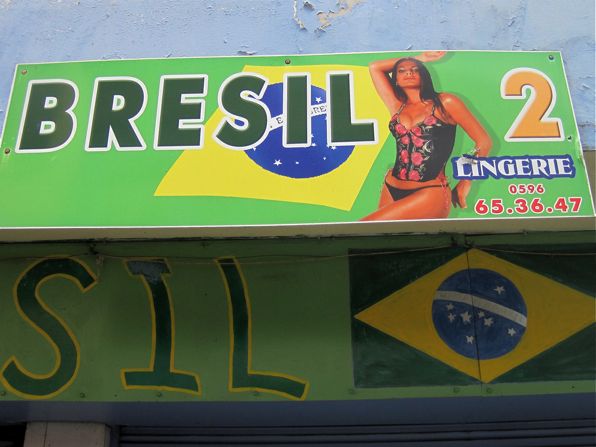 I wonder if our friends from Brazil know about this place. 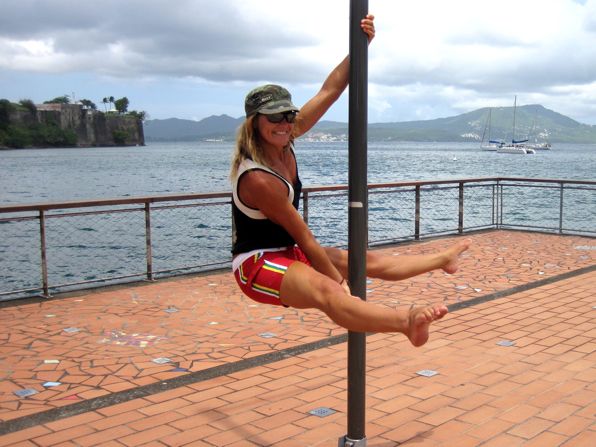 Wasn’t it nice of the parks people to put a dance pole right by the waterfront? 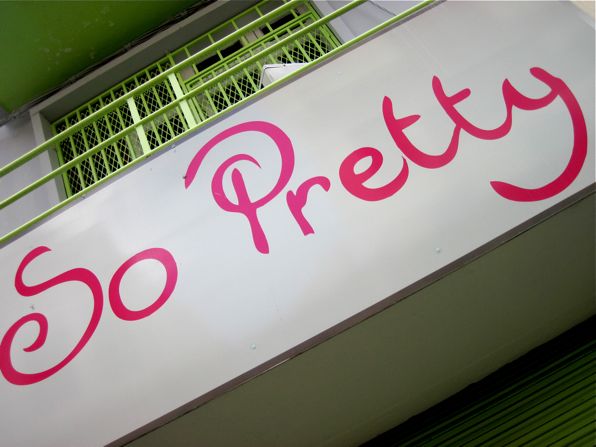