Not quite as sexy but…

In my post about What Really Matters (on a boat), number 1 on the list is “Keep the water out.” That’s obviously pretty important as a serious failure to do so often results in the boat in question sinking. In addition to a bucket for bailing, most boats are fitted with one or more bilge pumps, either manually operated or run off the vessel’s batteries.

With the multiple sealed flotation chambers built into our boat, bilge pumps may not be quite as critical as for a monohull. Still, we do have shallow bilges that occasionally accumulate water (ask me why you should not leave the hatches open on an unattended boat during the rainy season). There is one Whale Gusher Urchin Bilge Pump

installed in our cockpit which can switch it’s operation to pump from either of the two hulls via a Y-valve. It seems to do the job. That pump won’t however deal with any other areas of the boat, such as the forward compartment where the thru-hulls reside, and yes, we’ve had some water there before too! 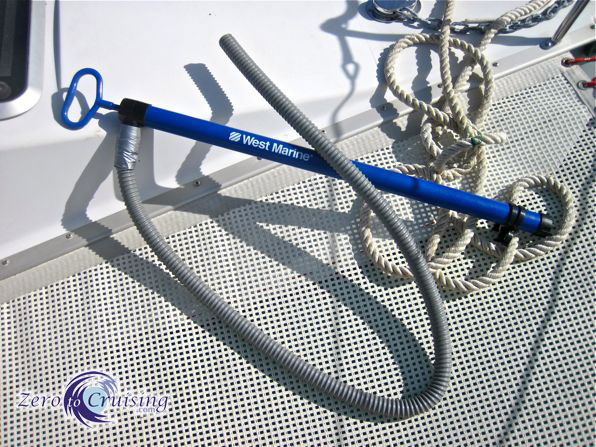 I once saw an Edson Emergency Bilge Pump

listed for sale on a cruising forum and visited the product website to read its specs. It looked pretty impressive: robust construction and it can pump 30 US gals/min. The price tag was equally impressive though: $998.00 US. OUCH! Now, if your boat was sinking, that $998.00 would be money well spent. But on our cat, which is much less likely to sink, that kind of expenditure just isn’t going to happen. I still would love to have a backup though.

Yes, we do have buckets for bailing, and we also picked up a nice piston pump. Both of those can evacuate a fair amount of water when a well-motivated user is operating them. Just recently though, I decided to get creative and construct a backup pump, similar to the sexy Edson one, using a spare Whale Gusher

pump that we had on board. It didn’t take much: a couple pieces of wood, some hose and hose clamps and of course, the pump itself. No, it may not be quite as bullet-proof as the expensive Edson one, and it is only rated to move 13.1 US gals/min as opposed to the larger pump’s 30 US gals/min. But for our purposes, I think it’ll work great and, even if we had purchased all of the parts for our construction new, which we didn’t, we’d still have $900.00 left in our wallet! 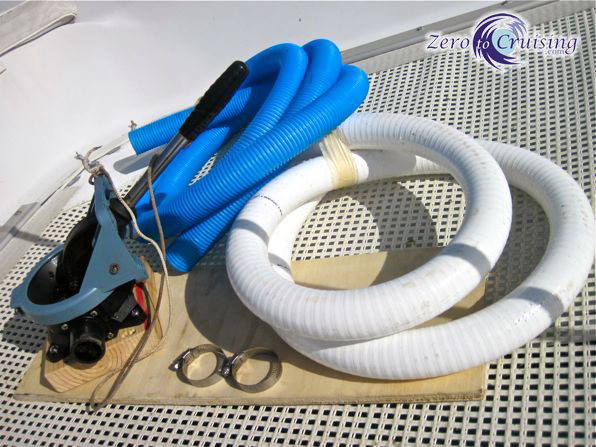 Not super sexy but not a thousand bucks either!

How will we obtain clients?