Some additions to my earlier post, written while underway from Deltaville to Norfolk…

We set off from Solomons Island Saturday at just after 6 am, and having checked the weather on the internet*, we were expecting a quick downwind sail to the Deltaville area. We weren’t expecting such a quick sail though. We started out into the channel with a single reef in our main sail and full jib. The NW winds, and the waves which accompanied them, continued to build so that by 8:00 am, we decided it would be prudent to put in our second reef and partially furl our little jib. By the time we reached the mouth of the Potomac, we felt that even with our greatly-reduced sail area, we were still overpowered. When the winds would gust over 35 knots, it would push our stern around so hard that we would end up beam to the large waves! It took both hands on the wheel, hard over to get us back on course. With no other way of reducing our main sail area, we decided to drop it altogether. We did this while still sailing downwind though so it was a bit hairy, requiring me to go up on deck and wrestle it down. Immediately after doing so though, the whole world felt calmer. Sailing with only a fraction of our little jib out, we were still consistently making better than 7 knots. Although we did ultimately let our full jib come back out to play, our main sail stayed tucked away for the remainder of the day. 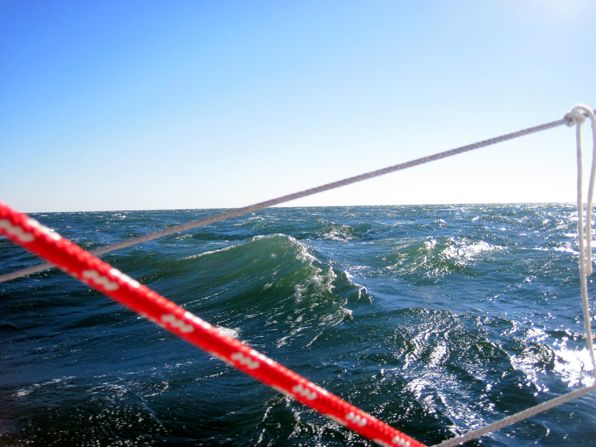 It is so hard to capture the height of waves, but we did try. 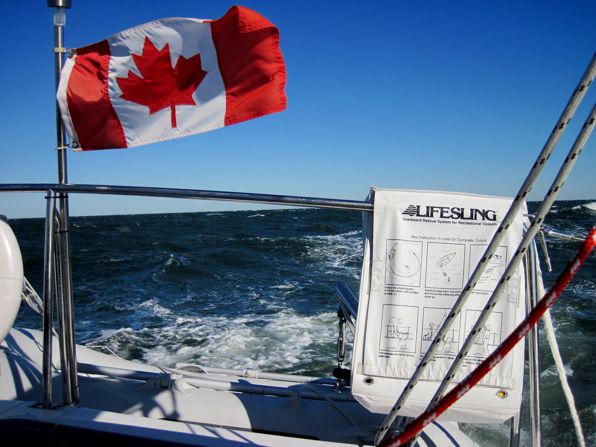 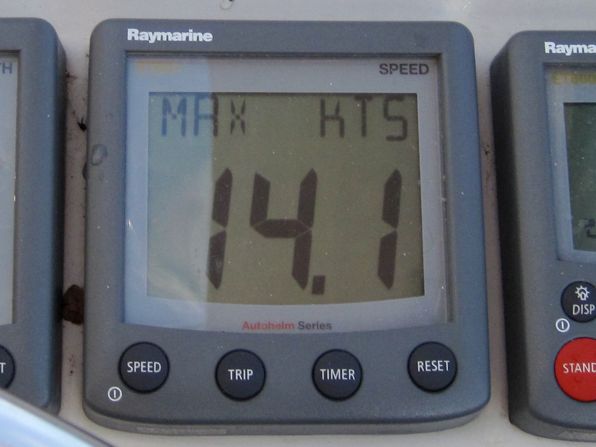 Our new speed record, achieved while sailing on a broad reach with two reefs in our main and a partially-furled jib. 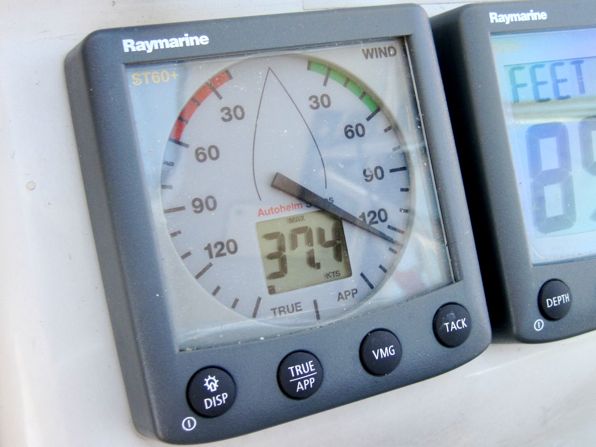 Our new high-wind record. We are not looking forward to beating that one in the near future!

Our planned anchorage was in Jackson Creek, in the Deltaville, Virginia area. As we were approaching Deltaville, another catamaran was making their way in behind us. The channel into Jackson Creek is reminiscent of the one we went through into Fairlee Creek. It was very narrow and required us to motor directly at a beach and then make a hard left to remain in the channel. Our charts didn’t show much detail for the area so we needed to trust the markers, and there were enough of them that it didn’t look so tough. That is, until we got stuck, right in the middle of the channel! I made a couple of immediate attempts to free ourselves and failing to do so, turned my attention on the other catamaran that was now making their way towards this same channel. I got on the radio and hailed them, letting them know that they might want to hold off and perhaps look for another anchorage for the evening. After they thanked us and motored off, we set our sights back on freeing ourselves. A bit of playing with the engines, back and forth and we were ultimately able to get our boat unstuck from the sand. We’d had enough of that channel though and moving out of it, ended up following the other cat into the next anchorage. We later heard that the strong NW winds had blown much of the water out of that bay, which is why there wasn’t enough depth for even our shallow-draft vessel to navigate the channel. Too bad we hadn’t know that earlier. Lesson learned.

As it turns out, Fishing Bay, where we ended up, was a great spot and it offered perfect protection from the NW winds. We dropped the hook just in front of the other catamaran, which we could now see was named Never Bored. While getting ourselves squared away, the owner of that cat came over to introduce himself and also to thank us for hailing them about the channel. We learned that they had actually witnessed us getting stuck and were holding off entering until they figured out what was going on. 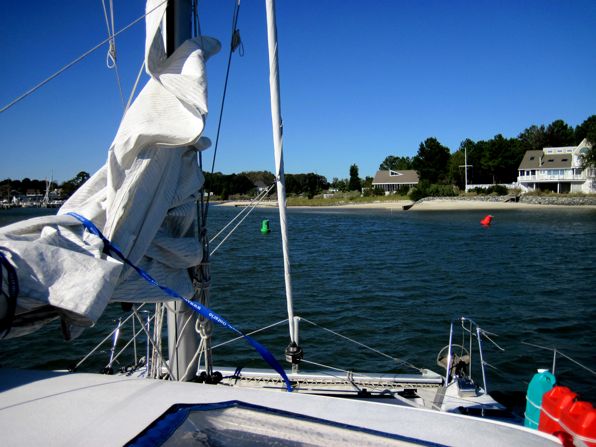 Motoring in towards the first turn in the channel.
It was shortly after making the turn to port we got stuck.

Chris, and Sheila, the owners of Never Board, a 40′ Admiral catamaran, were kind enough to invite us over for cocktails and we jumped at the chance to socialize a bit and tour their boat. As it turns out, the two of them sailed their cat to the Caribbean from South Africa and have been cruising all over for the last couple of years. Fun stuff. Perhaps we’ll be able to claim something that significant in a couple of years. Great meeting you Chris and Sheila and if (when) you catch up to us again, we have that Canadian flag for you. 🙂 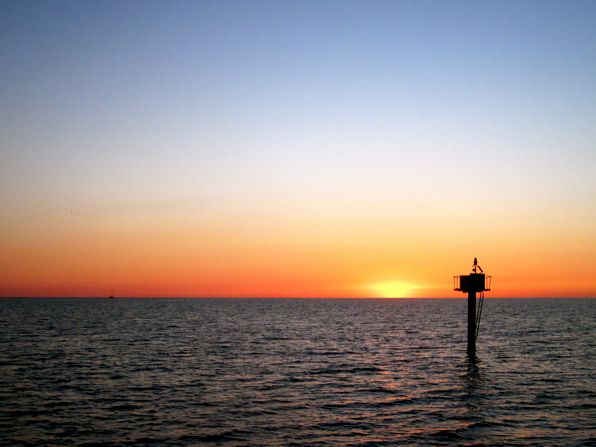 On the move again early, this time towards Norfolk, Virginia.
We never get tired of these beautiful sunrises.

*We checked the weather forecast on the Weather Underground, which we think is an excellent website. What I neglected to do yesterday, that I did do the day before, was to check the actual winds, as opposed to what was forecasted, via the NOAA Weather Bouys. Had we done so, we “might” have opted to remain at anchor for the day. One more lesson learned.

Too many pics to choose from