On our most recent shopping trip to Budget Marine, I found that they had a bin of inexpensive knives for sale on their counter. As each was less than 6 bucks, I decided to pick up two of them to place in a couple of key locations on the boat. No, my intention was not to use the knives to fend off pirates but rather to deal with something far more likely, a line that needs to be cut, quickly! This morning I ended up putting one of those knives to good use. 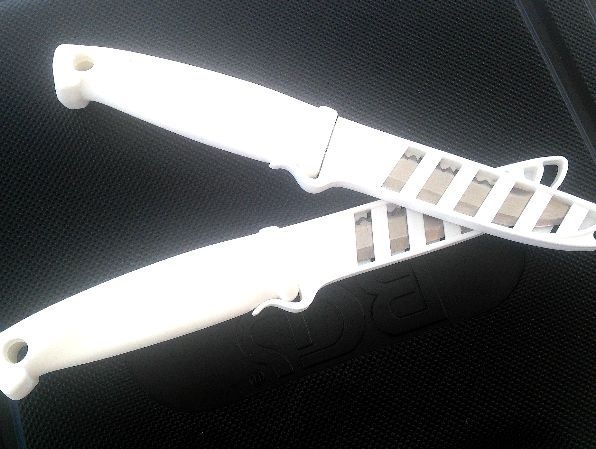 As I sat in our berth editing photos from yesterday’s hiking excursion, I took note of the monohull beside us raising anchor. Or at least, attempting to. When the anchor breached the surface of the water, I could see that it had a chain looped over it. As there were no other boats in close proximity, I guessed that he had hooked some old, unused mooring chain. Not good.

I came up on deck to watch what was going on and saw that the male half of the couple had jumped in his dinghy to see if he could better deal with the problem from the water. Once at the bow, I could see him struggling with the weight of the chain. It was obviously not going to be an easy fix for him. I watched as he tied his dinghy painter to the chain, apparently thinking that if he secured the chain in position, he could lower the anchor and unhook it from the chain. He didn’t seem to be having a lot of luck so we quickly launched our dinghy to see if we could give him a hand.

As it turns out, the chain was big. And heavy! With Rebecca securing the dinghies in place and both of us men lifting the chain, we were able to create just enough space for the woman on the boat to lower the anchor from under the chain. It was at that point that we made the mistake of letting go of the heavy chain, not that we had a lot of choice. Remember how I said that he had tied it to the dinghy painter? When the chain dropped it was still attached! Oops.

We struggled once more to raise the chain, only to find that we could not untie the knots with all that pressure on it. We’d have to cut the rope but unfortunately, neither of us had a knife. By this point his boat had drifted away from us so we couldn’t get one there. As his dinghy certainly wasn’t going anywhere, I told him that we’d quickly acquire one and be right back. Sixty seconds or so later we returned with one of our brand new knifes, grabbing it from the helm station where I had left it. With all the pressure on the line we barely had to touch the knife to it for it to part, dropping the chain back to the bottom of the harbor and setting our neighbor free. Problem solved. That knife will now permanently reside in the tender and I’ll acquire a couple more the next time I visit the chandlery.

Note: While the idea of tying the line to the chain was good, in hindsight it would have been far better to use a piece of line secured to the boat itself as opposed to the tender. Lesson learned.

For fun or for dinner

Trying to stay in bed!