Not all that smart!

Here is a funny story, especially considering yesterday’s post. Being that it was Sunday, a no-work day for us (if we can help it), Rebecca and I decided to dinghy over to St. Anne to go for a hike along the coastline. This is a hike that we’ve done a couple of times in the past, and it’s very pleasant. Most of the walk is either on a well-defined, shady trail, or along beautiful, sandy beaches.

The distance from where we are anchored in Le Marin to St. Anne is considerable, but with our go-fast dingy, the trip is manageable. Before we set off though, I checked the amount of fuel in the tank by giving it a shake, just in case. My guess was that we’d safely have enough gas to get us there and back. No problem.

After 10 minutes or so of skimming over the waves, we approached the pier in St. Anne. Just as we did so though, the outboard engine started to sputter, and eventually stalled, leaving us drifting about 50′ from the dock. Playing with the choke, I was able to get it restarted, moving us towards the dock once again. Unfortunately, it stalled just as we came alongside. Sigh! 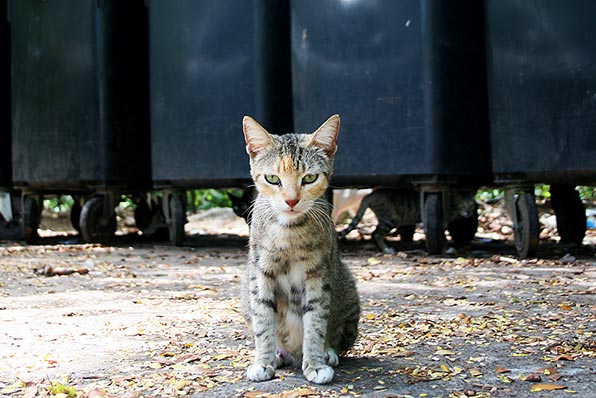 Martinique is different in many ways from other islands in the Eastern Caribbean. Here is one example: cats. In Grenada, the island that we recently sailed from, it is much more common to see dogs roaming around. Yesterday, while hiking, we saw no dogs but many cats.

Because we were planning on going for a fairly long hike, I didn’t bring my Leatherman

with me because I didn’t want to carry it in my pocket. We also didn’t bring our VHF Radio

with us for the same reason. Those are two things that I always carry with me when out in the dinghy! Knowing that it might be hard to repair the engine without any tools, or call for help* without a radio, we set off on our hike with the understanding that we’d better be back to the dinghy dock no later than 3:30 because we might have a very long paddle to get us back to the mother ship.

Regarding asking for help, being that we are Canadian, it’s sad how little French we can speak. In any Spanish-speaking country, I am confident that I could get my point across. Here in Martinique though, unless we find someone who speaks English, we are virtually helpless!

As expected, being that it was Sunday, the beaches were full of families and friends “liming,” seemingly a tradition here, as it is on the english-speaking islands. We made it as far as Anse de Salines where, after stopping for a cold beverage, we turned around to make our way back to the dinghy. By that time, we were both complaining about sore feet (we each need to purchase a new pair of shoes!), and so were glad that we turned around when we did. 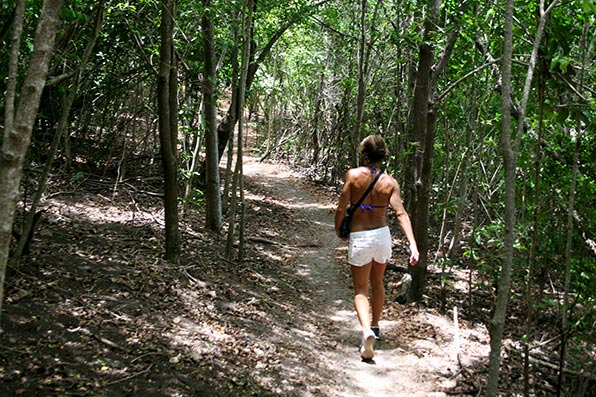 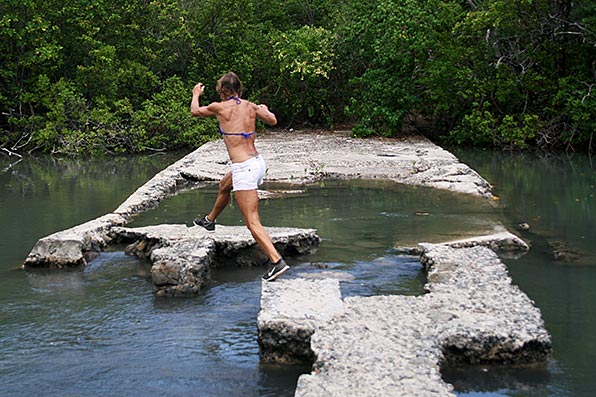 Back in the dinghy, I wasn’t sure exactly how to deal with the engine problem. I started it up and it seemed to run OK for a bit, but after 30 seconds or so, it would stall out. Assuming that it must have something to do with the new fitting that I installed the day before, I used my pocket knife to undo the hose clamp so that I could remove it, and inspect the hose. Thinking that there might have been a crack in the hose by the fitting, I cut a short piece off and reattached the connector. Once back on the tank, I was able to again get the engine started, although it seemed that I needed to keep it throttled up and the choke partially engaged to keep it running.

Without much choice, we decided to make a go of it, figuring that if we were going to have to paddle our way back, we’d cover as much ground with the engine running as we could first. On the way back the engine stalled once, and bogged down a couple of other times, requiring me to adjust the choke to keep us moving. After a period of time that seemed much longer than what it took for us to get to St. Anne, we finally made it back to Frost.

Now back at the boat, with access to tools, I figured that before I started to do any serious troubleshooting, it was only prudent to add some more gasoline to the fuel tank (we keep a jerry can full of fuel on the stern). Once I topped it up, you can imagine what happened… the outboard engine worked fine. Yes, apparently it had been sucking air simply because the fuel was so low in the tank, and the pickup tube had been coming out of the remaining gas as we bounced up and down in the waves. Smart, eh? No, not really!

No sink, no water