No moaning (from us) in the Mona

As I wrote before we departed, our passage to, and then across the Mona Passage between the Dominican Republic and Puerto Rico was, in our opinion, our greatest challenge yet. With that said, both Rebecca and I, and our traveling companions on the ketch Top O’ the World, were excited to tackle it.

Waiting until the trade winds laid down in the harbor, we cast off from our mooring ball in the Luperon harbor at 9:30 PM Friday. The harbor there provides excellent protection and we knew that if it was blowing inside the anchorage, we definitely didn’t want to be outside. A bit of drama commenced almost immediately. Rebecca and I took the lead of our two boats, she on the bow with a spotlight and I at the helm. We piloted our way around dozens of boats and unused mooring balls in the pitch black. Just as we approached the trickiest part of procedure, readying ourselves to make the dogleg turn to port through the shallow portion of the entrance, our spotlight died. To make matters worse, I screwed up our chartplotter making it almost useless. With no way to safely lead the way, we were happy to let our buddies go first.

***Lesson: Before doing something like that again, have a backup light ready (we have one) and have the big spotlight plugged into the inverter so that it won’t run out of juice!

As soon as we rounded the corner into the open water, we could feel the significant ocean swell. I should point out that our new friends in Luperon were joking about creating a betting pool to see how long it would take us to turn back. They cautioned us against leaving Friday evening, suggesting that instead we wait and go Saturday morning. Were they really concerned or did they just want us to stay and party at the Karaoke night at Puerto Blanca Marina? Just kidding guys. 🙂 They were concerned, knowing how rough it can get. Once out there, we could see that perhaps they were right. The waves were a bit rough and progress was slow going. We decided to stick it out though and thankfully, within 5 hours or so, the wind and waves subsided. 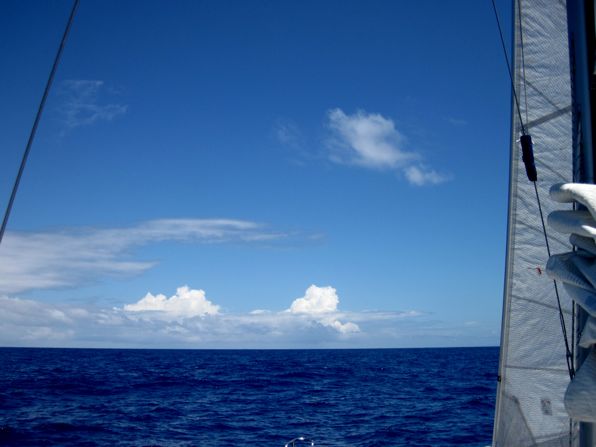 This pic, and the ones below it, need little description. Nature at its best! 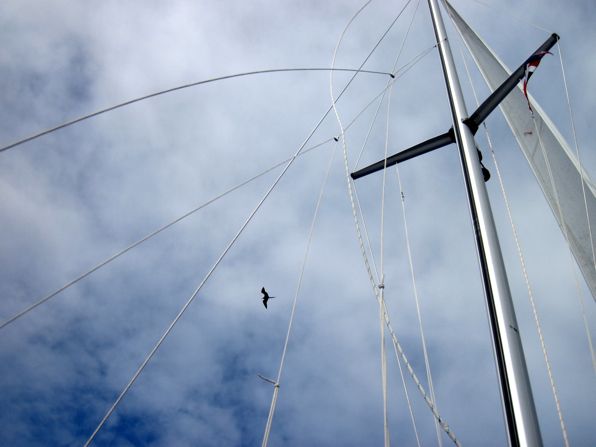 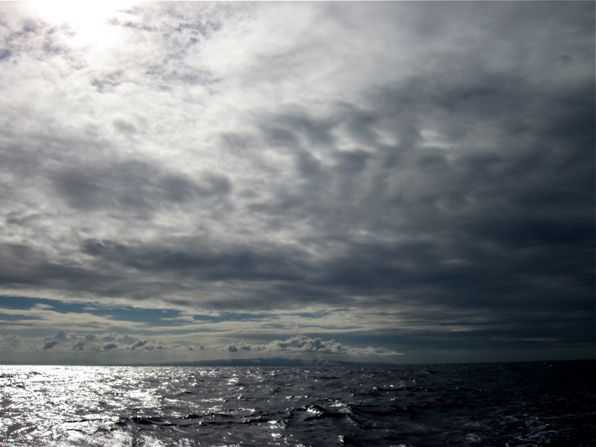 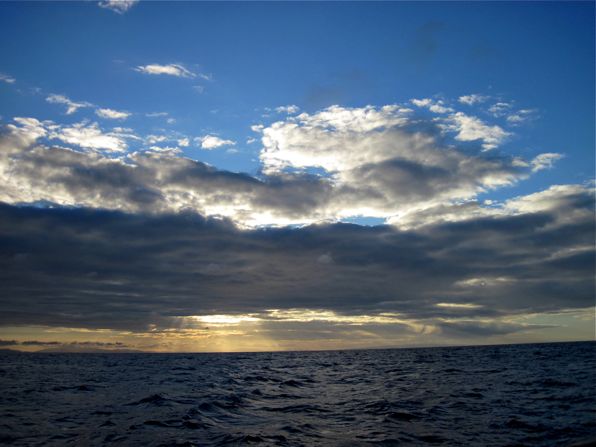 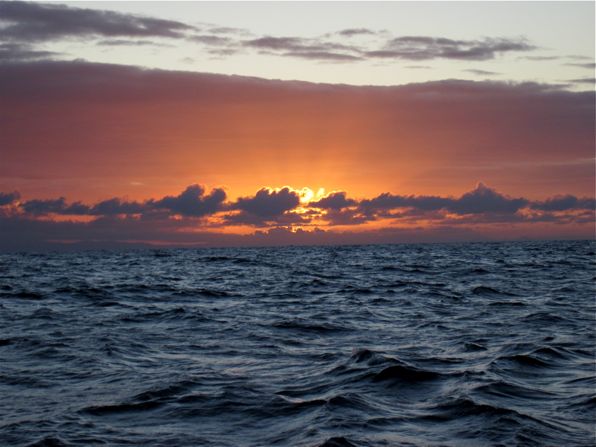 Dawn brought us calm wind and seas, just what the doctor ordered. Even during the sunniest part of the day, when the trade winds typically build, the winds remained light (and on the nose), forcing us to motor. By the evening though they had backed to the ENE and picked up enough that we could actually sail. The rainbow that you see in the photo below was presented to us at this time and it was mirrored in how our crews were feeling being able to sail! 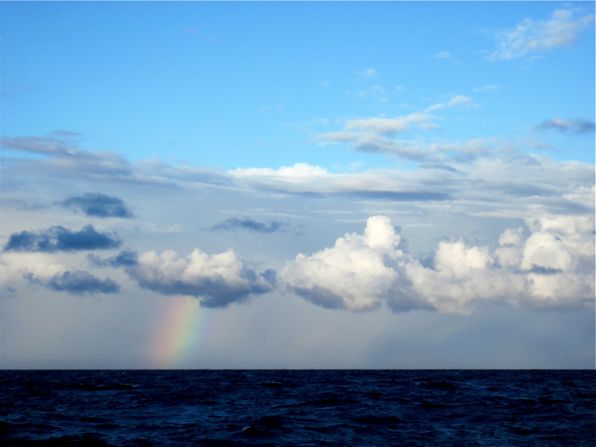 No matter how many times you check the weather forecast, you never really KNOW what Mother Nature is going to dish out. You just need to have faith. 🙂

Being that we have a much different boat than our friends, our sailing strategies differed. It wasn’t long before we were first out of sight, and then later out of VHF range. Fortunately, prior to this happening, we had arranged a 12 hour check in on our SSB radios (these have infinitely longer range than VHF) so that we could touch base. 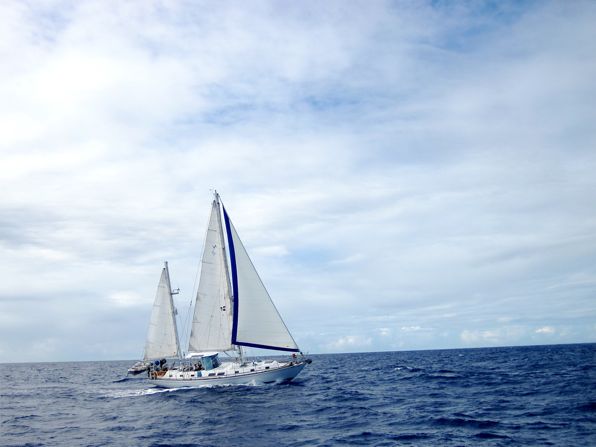 The last we saw of our buddies.

We have yet to hear the detailed report on our friends’ trip but for us, once we rounded Cabo Cabron, a turning point if we wanted to bail and go to Samana instead of crossing the Mona Passage, there was no turning back. We were motor sailing, making excellent speeds. In fact, if our luck held, we would be able to make our destination of Mayaguez by early evening, something that we were really looking forward to.

It was dawn as we inched our way into the Mona. Unsure of exactly what conditions to expect, we were pleasantly surprised. I don’t know just how good the conditions ever get in the Mona but for us, it was a non-issue in terms of sea state. In fact, as the wind backed and our speed picked up, it was excellent sailing weather. In spite of the fact that we could have sailed, we continued to run one engine along with our sails to keep our speeds above 7 knots. We were really hoping that we could make Mayaguez before dark and we were racing the sun a bit at this time.

The roughest part of the entire passage, outside of the first few hours of bashing that we had to endure, was the final two hours as we neared the PR coast in the setting sun. At this point, when one would expect the island’s lee to lessen the winds and seas, they built making a fast but bumpy ride. 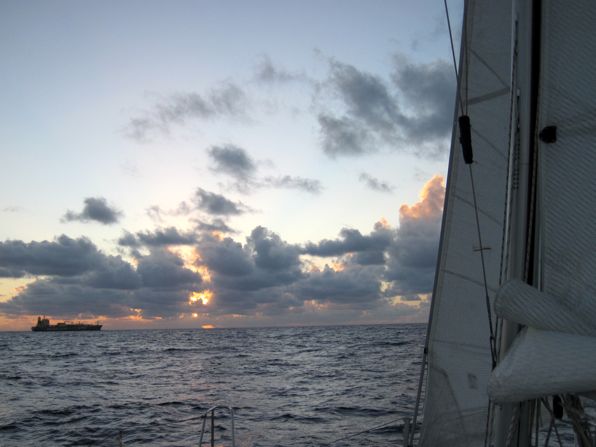 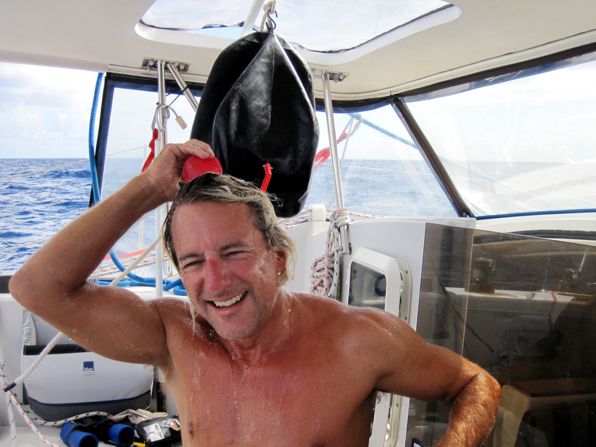 The easiest things on land, such as taking a shower, can be extremely challenging while on the water. It sure felt good though! 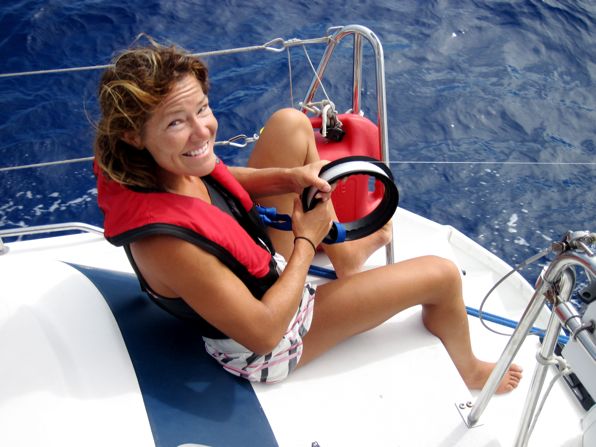 Another fish that got away. 🙁 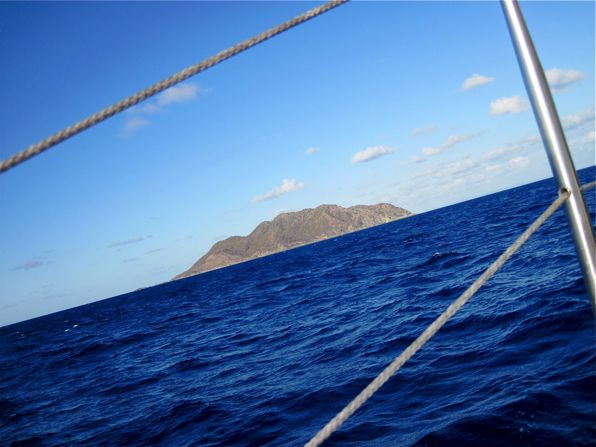 Land! Isla Desecheyo, 10 or so miles off the western coast of PR.

Making landfall in a strange harbor at night is, as you can imagine, a bit stressful. The Mayaguez harbor is an open roadstead but with the thousands of lights in the city, picking out the navigational aides was tricky. Our eyeballs worked together with our chartplotter though and we ultimately were safely anchor down at 9:00 PM, just about 48 hours from the time that we left Luperon. The passage was over!

As good as it was, it was not without incident. During the first day’s sailing, we had a fairly significant equipment failure. A bolt holding a terminator for our jib sheet sheered off, leaving our headsail inoperable. I am proud to say that it took only 20-30 minutes to see the problem, come up with a workable solution and implement it. Although not perfect, our makeshift repair allowed us to continue on, under sail, with pretty much no change in procedures. It will need to be permanently fixed of course but doing so here in PR will be a lot easier than trying to do something slow and finessey while bouncing around out in the open seas. 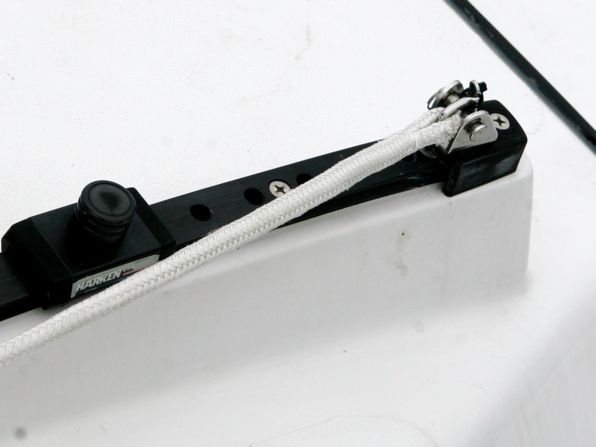 What the end of our jib is supposed to look like. 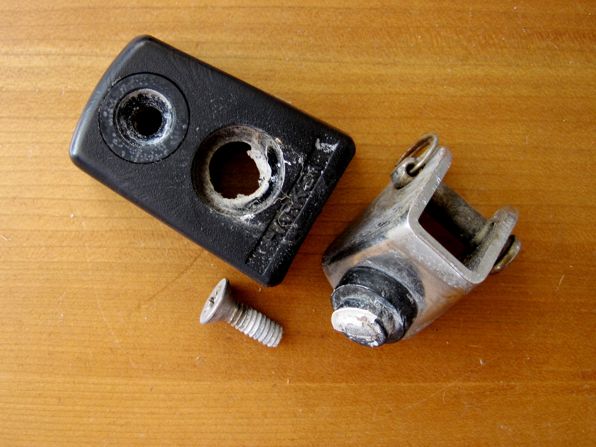 What the bolt is NOT supposed to look like! 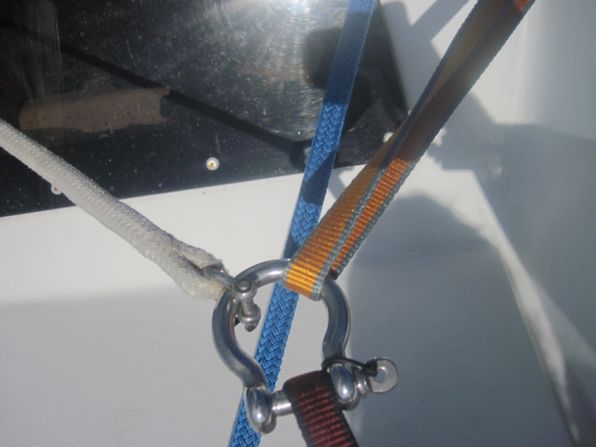 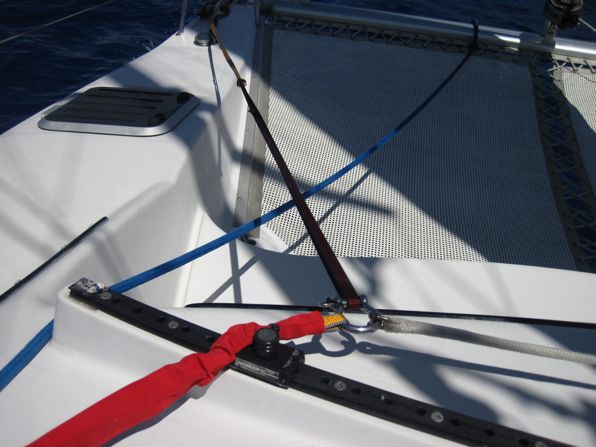 and some rock climbing webbing slings… 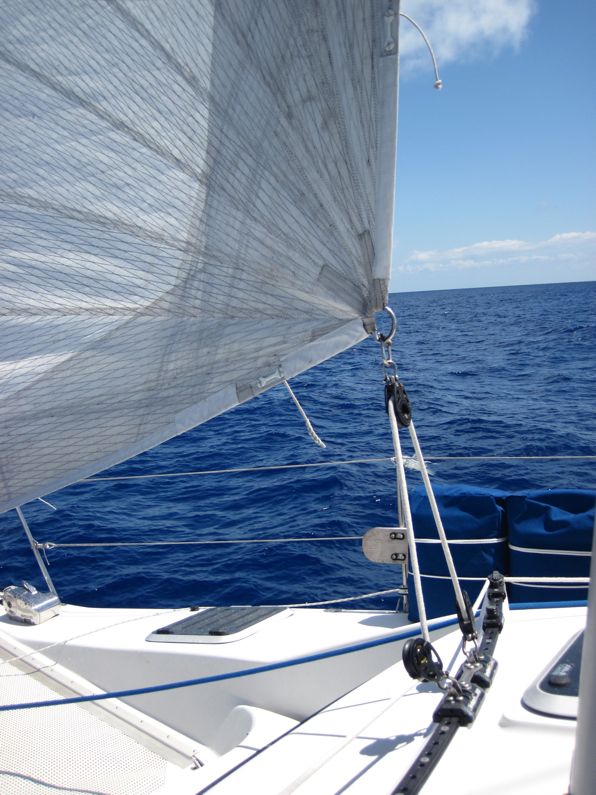 and all is well again.

After dropping the hook last night we immediately retired, exhausted. This morning we awoke at 6:00 AM and after checking in with our friends on the SSB, readied ourselves to go in to the dock to clear customs. Our first challenge there was being met with a sign telling us that if we were to land our dinghy at the “private” port, we would have to pay $25.00. We weren’t having anything to do with that so we went down the seawall a bit, and climbed the wall to land. We did as the guidebooks suggested and arrived at the customs office early to avoid any lines. Unfortunately we arrived too early… no one was there.

Here is where we need to put in a serious plug for the guys at the US Customs and Border Protection Agency. These guys were on the ball! We spoke to at least 5 uniformed officers there, each one smiling, friendly and helpful, some even joking around with us. With no actual customs officer present, they could very easily have told us to wait, which they did for a moment. With no complaints from us though, they rallied the troops and found one of the officers who could do the customs guy’s job and clear us in. Kudos to these guys. They had a sign on the wall pledging to do their job in a friendly and courteous way. I’m happy to say that at least these particular guys are more than following through on that pledge.

Once we were all legal, we made our way back to boat and quickly raised anchor. Our destination is Boqueron*, 10 miles down the coast. We’re looking forward to meeting our friends there and enjoying a bit of what Puerto Rico has to offer.

*Our friends were able to go directly to Boqueron as they are US citizens and could clear customs there by telephone. Boqueron is not an official port of entry though and Mayaguez is. It is this reason that we, Canadians, had to go here first and our friends could avoid that step.

The real mark of a cruiser