Mt Misery is a better name

After consulting the Oracle to find out the top things to do in St. Kitts, we settled on climbing Mount Liamuiga, formerly known as Mt. Misery. For the record, now after having climbed to the top and back, we think the old name is better.

The day began with a drive along the windward side of the island in Seamoss Man’s minivan. We learned from our research that the trailhead was somewhere near Bellmont Estates and that the road from the highway to that spot is best taken with a 4×4. Everton pressed on though and drove us a little way up the rough road before he made the wise decision to punt us out, saving his vehicle’s suspension. We agreed to meet him back at the main road 5.5 hours later, saving him that part of the drive. All we knew at this point was that we had to head towards the mountain. What we didn’t realize was that we were still several miles from the beginning of the trail! 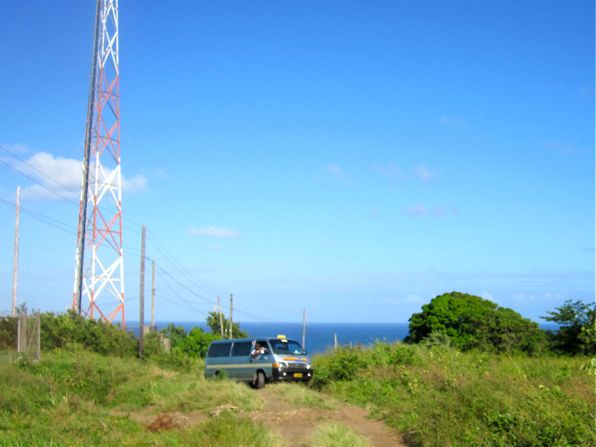 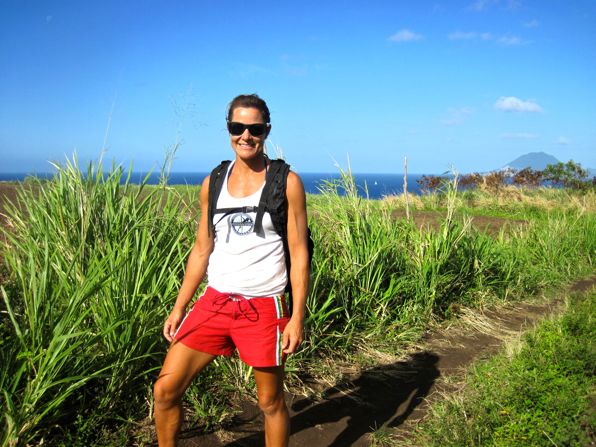 We walked along the rough road/trail, past farmers’ fields and ultimately across huge areas that had been stripped clean by heavy machinery. Apparently they’re planning on doing a “bit” of construction around there. The first person we came across on our hike surprised us by riding out of the brush on a donkey. When we asked him for directions to the trailhead, he told us to walk towards the house up on the hill. OK, that sounds easy enough, right? Not really. The house in question looked to be quite a bit more than a mile away as the crow flies, and we can’t fly. 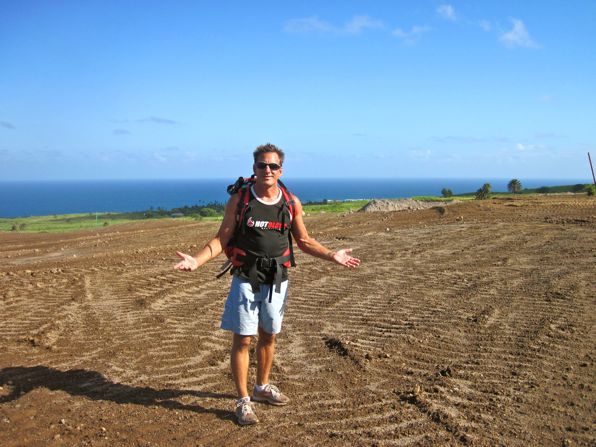 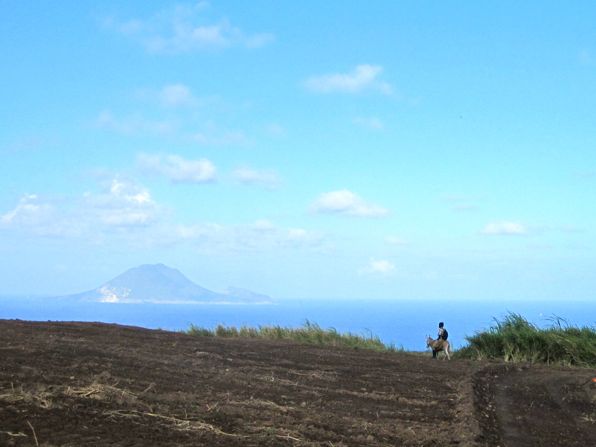 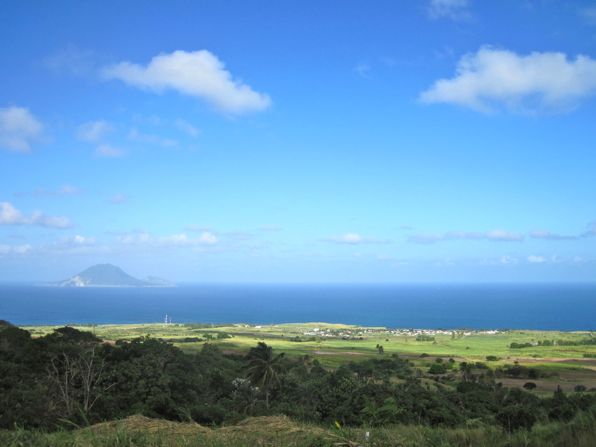 When we finally did reach the “house” we found that we were actually in the middle of a construction zone, the structure only being partially completed. We flagged down the first car that was driving by and for the second time in an hour, asked directions as to where the trailhead was. The driver was very helpful and gave us much more specific information (Ex. Walk up the road until you see two shipping containers side by side. There will also be a pile of lumber. Walk a little farther and the road will branch off to the left, etc. etc.). We followed his advice, continuing uphill for some distance. We got a little confused at one point but ultimately made it to the general area that he was referring to. After asking a third group of guys for directions, some surveyors working by the road, we finally found the elusive trailhead. Woo hoo! Now the fun was to start. 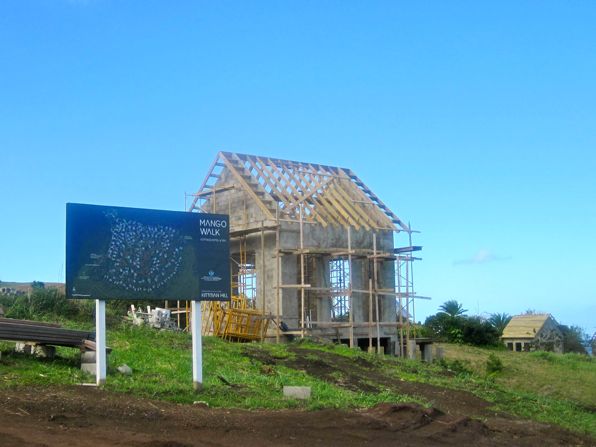 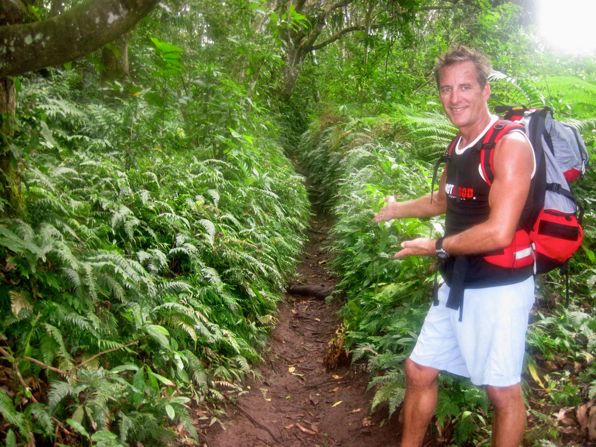 The well-worn trail lead through the lush forest, always upward. There were huge trees all around us with roots sticking out every which way. Although the walk to the crater was tiring, it was not at all technical (when compared to some of the other climbs we have done). Considering that we left pretty early in the morning, we were surprised to come across 3 people ahead of us on the trail, sitting down, having a break. They said that we looked in better shape than them and offered for us to go ahead. By that point I was pretty tired so I wasn’t so sure that their assumption was accurate, but we pressed on, up and up.

When I checked my watch as we reached the crater’s rim, I found that it took us 1.25 hours to get from the trailhead to where we sat. It had taken us a little over an hour even to make it to the trailhead though from where Everton had dropped us off. As such, it was time for a short break so we broke out the sandwiches that we had packed for the trip. 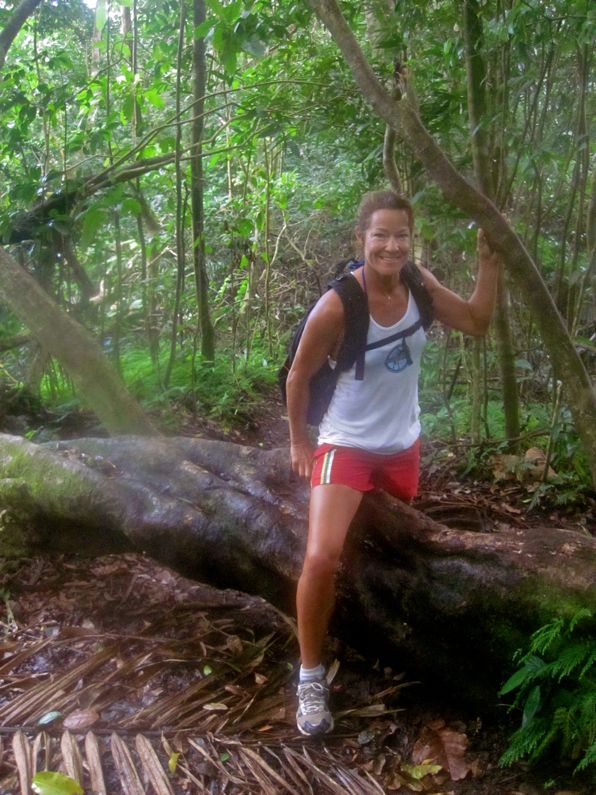 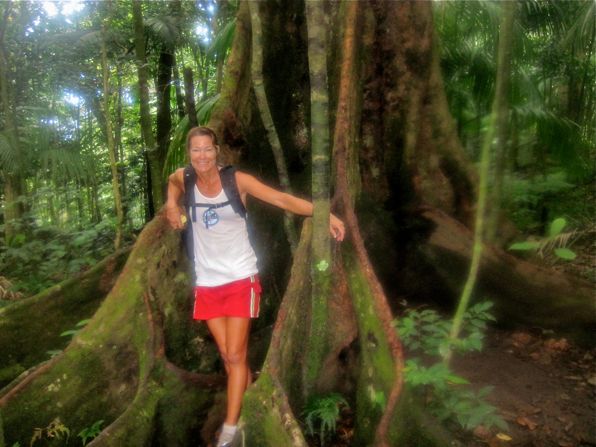 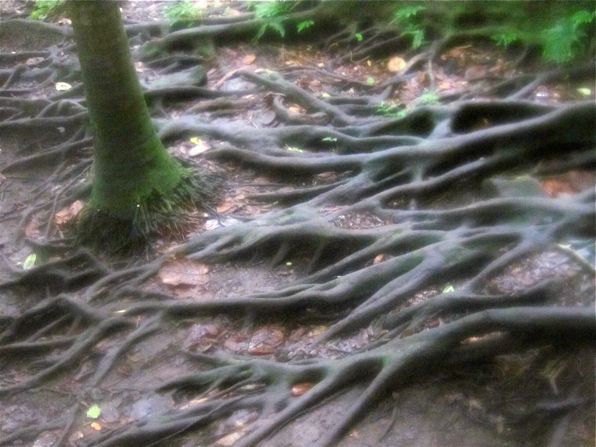 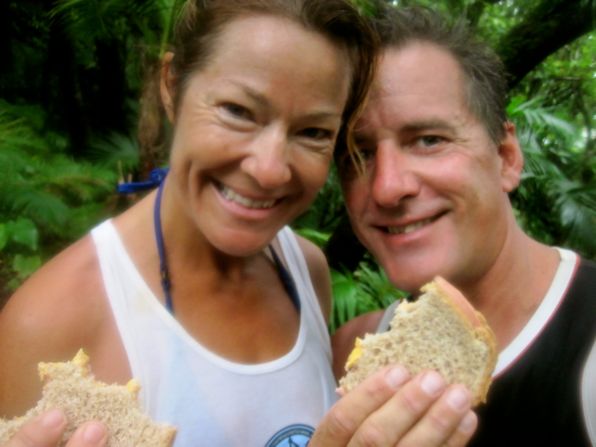 Apparently from the point where the trail meets the crater rim, you can circle left, right or descend down into the crater, the latter considered to be a fair bit more dangerous. Guess which one we opted to do? As we began working our way down, we found that there were ropes secured to trees to assist with the descent. We commented to each other as we started down that the trail was not as bad as we had expected. In fact it was not that much more difficult than a typical Saturday Hash in Grenada. Unfortunately, it was to get worse. There were actually a couple of pretty sketchy spots including one place where I found myself at a bit of a standstill (literally, on a ledge, standing very still, afraid to move further). The only way to move further down was to trust one of the “ropes” that had been set and I didn’t feel safe placing my life in the hands of an old piece of webbing that had been sitting in the elements for God knows how long. Here is where the Boy Scout’s “Be Prepared” thing comes into play. We actually brought a line of our own and preceded to rig it to a large tree. Using that for security, Rebecca and I were able to move past this crux. There were a couple of other sketchy spots as we descended further but by taking our time and being extra careful, we made it down without further issues. 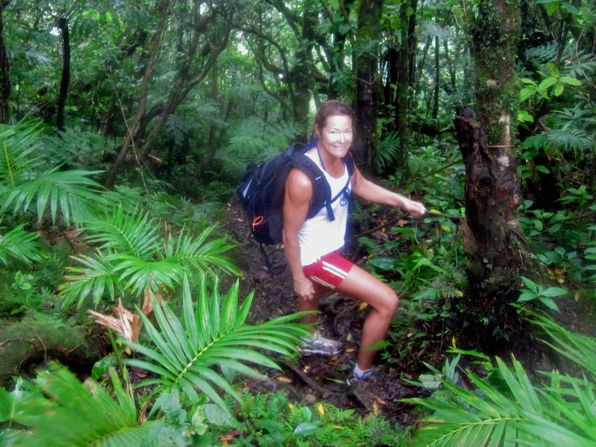 The bottom of the crater was very cool. As you can see in the pics below, the majority of the surface is covered by a lake. The clouds covered the top, preventing us from being able to see the sky, or the rim of the crater. We had underestimated just how far down we would be climbing. It took us an entire hour to make it down to the bottom, regrettably only leaving us with 15 minutes to chill out before we had to start back up (we had to make it back to the road by 3:00, our scheduled pickup time). Groan! By this point my legs were really tired and I was starting to get muscle cramps. 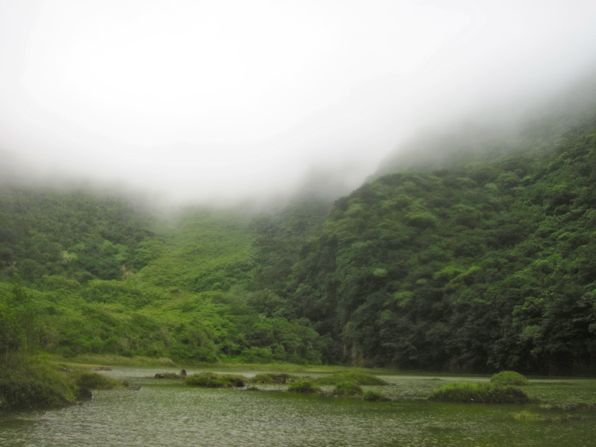 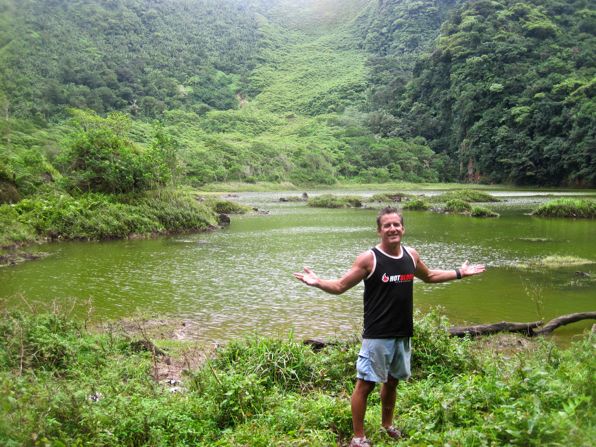 Fortunately, the ascent out of the crater was less difficult than the descent. We retrieved our rope as we made it past the particularly steep part, ultimately making our way to the rim. As we moved upward we could hear voices coming from the top, evidently coming from other hikers. At several points we heard what sounded like large rocks crashing through the trees, we surmise either coming from some monkeys who were pissed-off at our invading their territory or from stupid tourists throwing stones down into the pit (I’d bet on the latter)! Fortunately, none came too close to us.

Back at the top, we rested only long enough to enjoy a few sips of water before we began our climb back down towards the base of the mountain. It has been our experience that it always takes us less time to go down than it does to go up and we had taken this into consideration when we were planning our schedule. I’m not sure if it was because my legs were in such bad shape or what but it took us exactly the same amount of time to go down as it did to go up. This was to be a problem. It was 2:40 PM when we made it back to the trailhead and we then only had 20 minutes to make it back to the road, several miles away. And by then I was so looking forward to a nice leisurely cool-down walk. Alas, it was not to be. 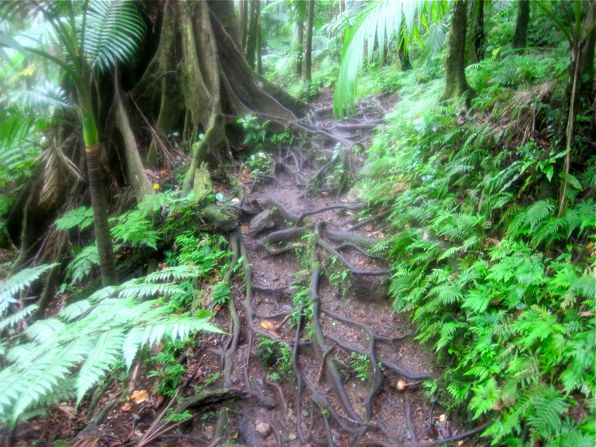 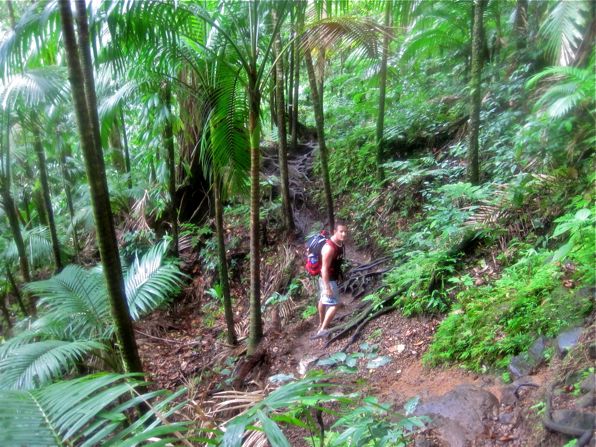 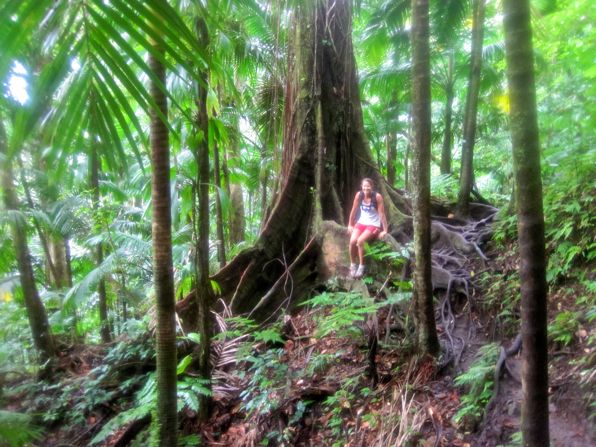 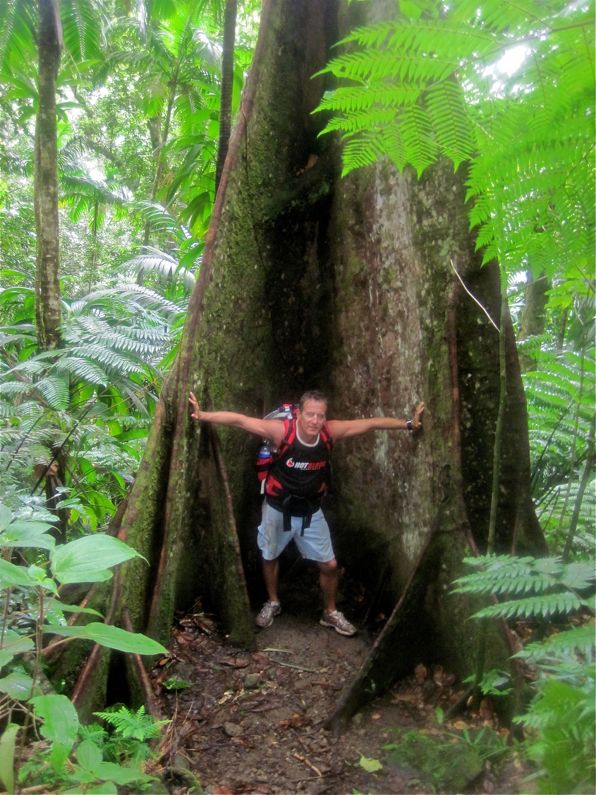 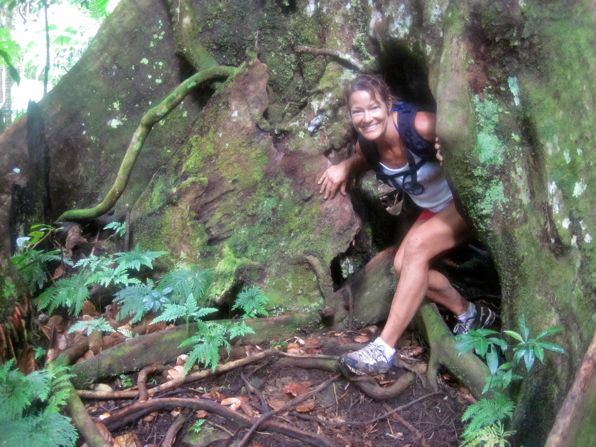 Rebecca and I set off marching, as fast as our tired legs would allow us. Did we make it back on time? Hell no! We were about 30 minutes late. Everton had given us his cellphone number and I did try to call him but unfortunately, without a local Sim card in our phone, it wouldn’t work. When we finally did arrive, in true island fashion, our driver didn’t seem at all pissed off. He simply congratulated us on our completing the hike and ferried us back to town, this time taking a scenic drive on the leeward side of the island. 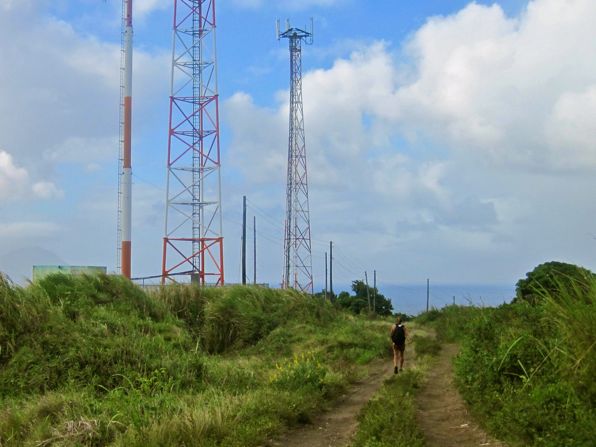 Special edition – the man behind this morning’s funny video

Don’t you hate when…