Although I’ve focused on the solar install the past few days, that’s not all that’s been happening here. To begin, after using the PDQ forum to make contact with the owners of the PDQ that we saw near our anchorage, we were happy to be able to get together with Amy and Tom to get a bite to eat. It’s always fun to meet and talk with other people who own the same brand of boat that you do. While we were out enjoying ourselves though, our friend Bill took it upon himself to give our Tohatsu engine a bit of a tune up, cleaning and adjusting the carburetor, getting it to run perfectly. How is that for a friend? 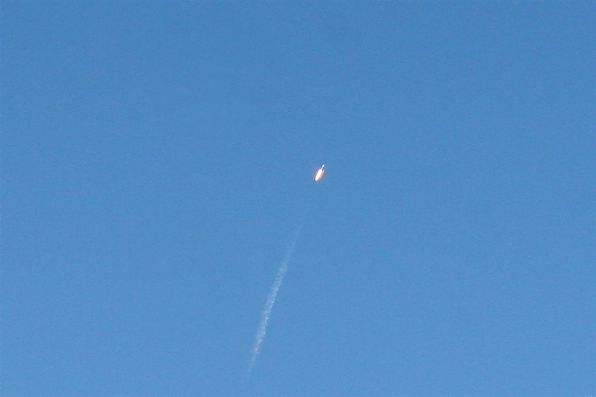 Fixing the engine may not be rocket science, but this is.
We were happy to be able to see this rocket take off the other day. 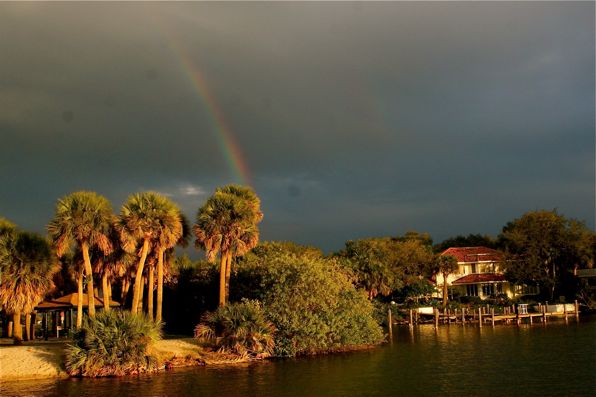 This was a rare double rainbow but by the time I retrieved my camera, the second one was almost gone. It was still beautiful though.

A bit later that day, we decided to pick up anchor and once again, move just around the corner to stop in front of a bar called Squid Lips. The place has live music on the weekends so we planned to drop our hook just off their beach within perfect listening range. The first step in doing so was to retrieve the Fortress anchor that we had set off our stern. This beast must have buried itself about 6 feet down into the mud because it did not want to come up. Watching Bill and I try to pull this sucker out was no doubt hilarious and how we managed to do it without taking a bath, I don’t know. Man, I have some serious respect for that anchor! 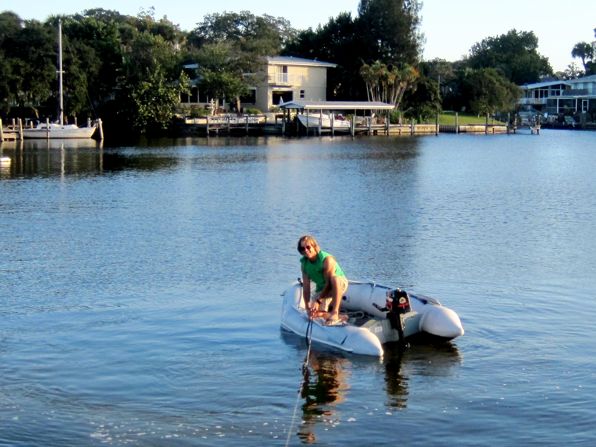 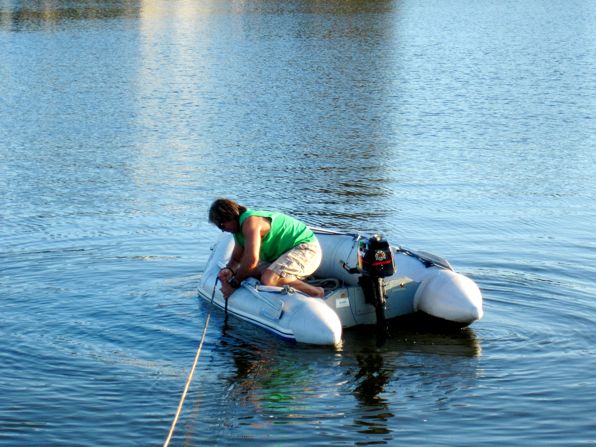 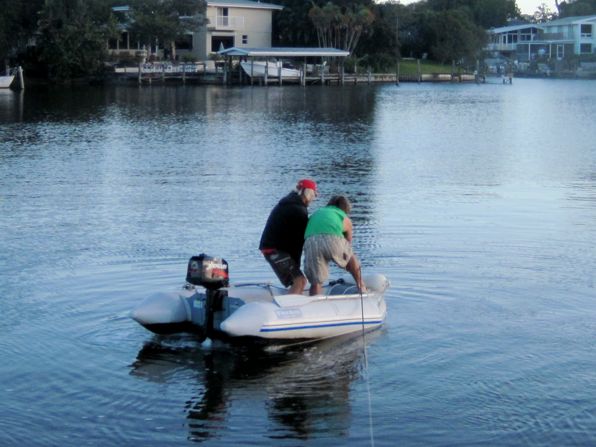 Both of us really pulling… 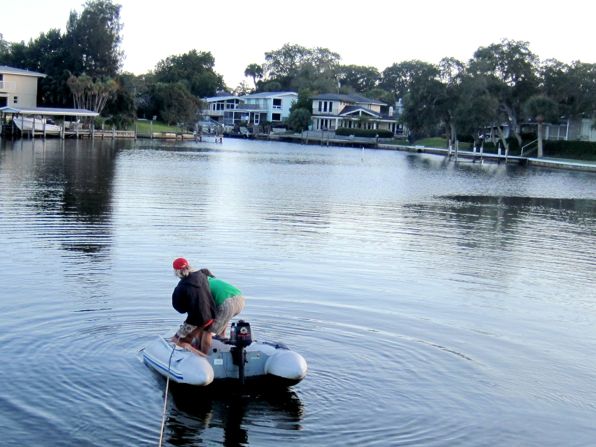 Are we getting anywhere with this?

After getting to the bar, we dropped our Rocna and motored back away from the beach as normal. Knot Tide Down moved in just after that and set their bow anchor in the opposite direction, backing down towards us. We were then able to raft up starboard side to starboard side and hold our position in this little bay perfectly. Anyone watching would have thought that we had done this maneuver a thousand times. 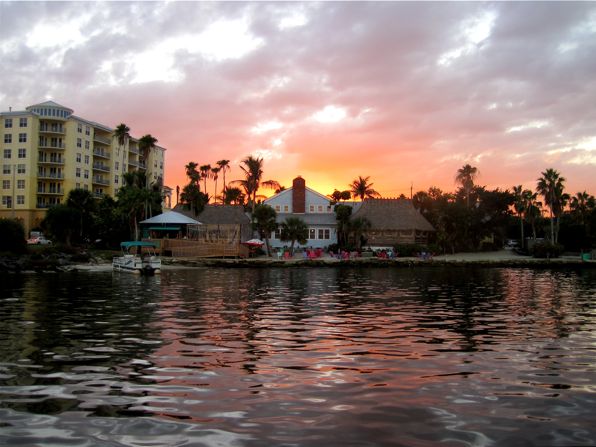 Anchored just in front of the bar.

The engine spares that we ordered a week and a half ago from Boats.net finally arrived. This place has good prices for parts but they really need to get their shit together a bit more on the service front. To start, when I went to order the multitude of parts via their website, I was unable to find an exact match for the model number of our engines (possibly because they came from Canada). I found a very close match, but not exact. Rather than ordering a thousand dollars worth of potentially incorrect parts, I did what any smart person would do, I called them. The customer service rep that I spoke to told me that unless our model number was in their system, they couldn’t tell me if the parts would work. Period. I was told that I would have to call Yamaha to find out. When I asked if they had the number for Yamaha they told me no, that I would have to Google it. This is a place that answers the phone “such and such Yamaha!” They don’t have the number? Ultimately I went online to another source, found our engine’s number and cross referenced all of the expensive parts’ numbers to make sure that I would be OK to order them.

When the confirmation for my order showed that the parts would ship in 2 days, I was, of course, pleased. But we never got them. Checking our order status online showed me that some of the shipping dates had now been extended from Dec. 2 to Dec. 6. OK, that’s still doable, knowing that we would be here for a few more days. On the 8th when I still had heard nothing, and the web page showed no change, I called their service department once again. The lady I spoke to told me that they were just waiting on a couple of parts to arrive from the factory and they would be there the next day and it would ship out immediately after that. December 9th came and after still not receiving any order, or hearing any word from them, I called a third time. This time I was told that they were just waiting for the fuel pump assembly to arrive and that it would be in… FEBRUARY 8TH!!!! Did they want me to ship the rest of the order without that part? You’ve got to be kidding, folks… you really need to even ask a question like that? The order ultimately arrived, complete sans fuel pump and I am now in the possession of a bunch of expensive doo-dads that I hope I never have to use. I am quite certain that if anything does go wrong with ZTC’s Yamahas, it will be the fuel pump, the one part that I wasn’t able to acquire. 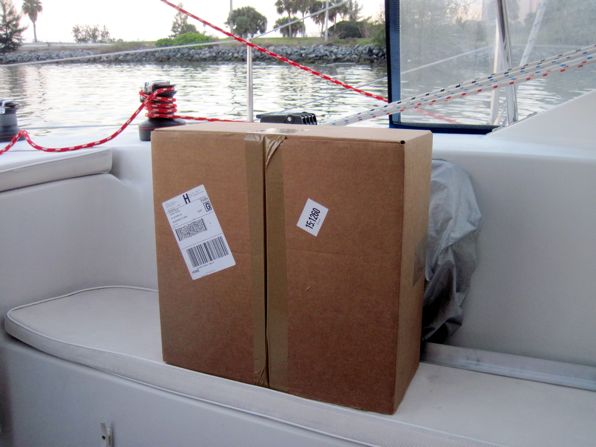 Speaking of Yamahas, it seems only fitting that after Bill doing all that work on our Tohatsu, we should come across the exact engine we have been lusting over in the Discount Marine Store around the corner. This place had on hand two 2010 Yamaha 9.9 HP 2 stroke engines that they were selling off at what I thought was a really good price. In truth, I was very surprised to even see these engines, believing that they were no longer available in the US. The store rep that I spoke with told me that existing inventory can be sold but once they are gone, they couldn’t get any more. These guys apparently just wanted them out of the store and were selling them at, what he told me was their cost. After getting online and doing a bunch of searching, I confirmed that the price they were selling them for was very, very good. This find gave us quite the dilemma. We have always known that we wanted a more powerful engine for our “family car” but should we spend the money? Warranty is also an issue as we were told that it is only good in the US. After much debate, it was jointly decided that Santa would come early for us and Rebecca and I went back to seal the deal. Now we have both a Walker Bay dinghy AND a Tohatsu outboard for sale! 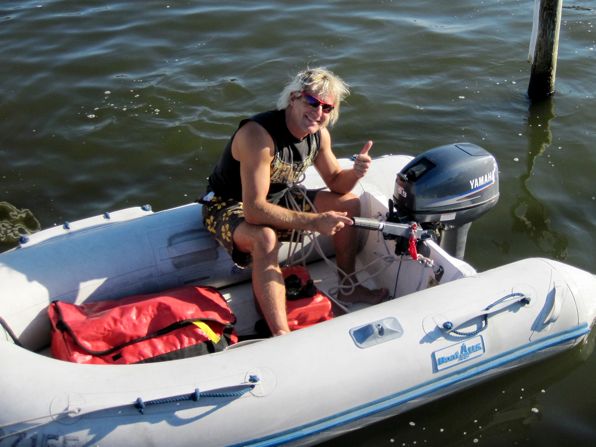 No me gusta la cucaracha

We think everyone should quit work at noon