As we are now anchored behind Liberty Island in NYC, with the Hudson River portion of our trip largely behind us, I thought I’d post a couple of additions to the info contained in the Skipper Bob guidebook. 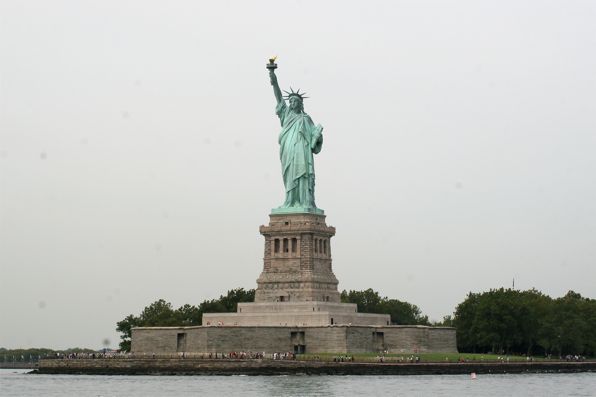 1. With respect to the free dock at Mariners on the Hudson restaurant, I have one word to add… FORGETABOUTIT!

2. With respect to the Pollepel Island anchorage… we don’t know if the weeds thing was a one-off occurrence or it happens regularly. The police officer who boarded us at Croton Point told us that they actually cut those weeds from creeks (Esopus Creek for example) to make the waterway passable. Perhaps they had just done some trimming nearby. Regardless, I would keep my eyes open and watch for it.

3. With respect to the West 79 St. Boat Basin mooring balls… here is a biggy: THEY DON’T ALLOW MULTIHULLS ON THEIR MOORINGS! We were told this by the harbor master there as we approached. This is a PRETTY HUGE detail! Good thing we had a Plan B.

4. With respect to the anchorage behind Liberty Island… I have two things to add here. First, although the anchorage is fairly protected from all winds except SE (the wind is blowing from the SE right now but we can’t blame anyone for that, can we?), it is not protected from the wakes of #$%#^% fishing boats which are zooming by us every 10 minutes. I’m sure many of them are waking us on purpose and the remainder are just ignorant. Secondly, and equally as important, it is a one hour walk (and we walk quite quickly) to the water taxi which can take you to Manhattan. The ticket was 7 bucks one way. After walking the hour to the taxi stand, and viewing the schedule which showed we would have to turn around and come back 2.5 hours later, we bailed on the trip and walked (one hour) back to the boat.

Sadly Rebecca had to listen to me bitch about this from the 30 minute mark onward. Sorry Rebecca!

Note: Smart me decided we should take a short cut around the back of the park because it looked shorter on the map. It might have been a bit shorter but it is through an industrial area with lots of fast moving cars and no sidewalks. Stick to the boardwalk; it is much nicer.

Also, Skipper Bob recommends against leaving your dinghy unattended on the dock here for long periods. Because of that warning, and our own initial recon, we decided to remove our engine, stow it inside ZTC and row over (our thoughts were that it would be a less valuable target like this and also, if it was stolen, at least we wouldn’t lose both the dink and the motor). Well, it wasn’t stolen and perhaps it wouldn’t have been regardless. We were prepared to swim back to the boat if necessary though. 🙂

What’s in your tool box?

Can there be Christmas without snow?