We may be short on cash but we are definitely still rich!

I’ll admit it, we had a dark couple of days surrounding the time of my last post. It’s been a very long time since we haven’t known at least the general direction that we should be heading, so having no plan or course was painful. Much can change in a couple of days though. Since my last post, there has been a shocking (to us) show of support from our friends and family. We have received numerous financial donations that have helped to shore up our broken piggy bank, countless offers for places to stay, and even a couple of leads for work. Yes, a couple of days can make a big difference.

Although we had only planned to stay with Alexander, our Warmshowers host in El Roble, for one night, we ended up spending several days at his house, taking advantage of his fast internet connection to try to come up with a plan. 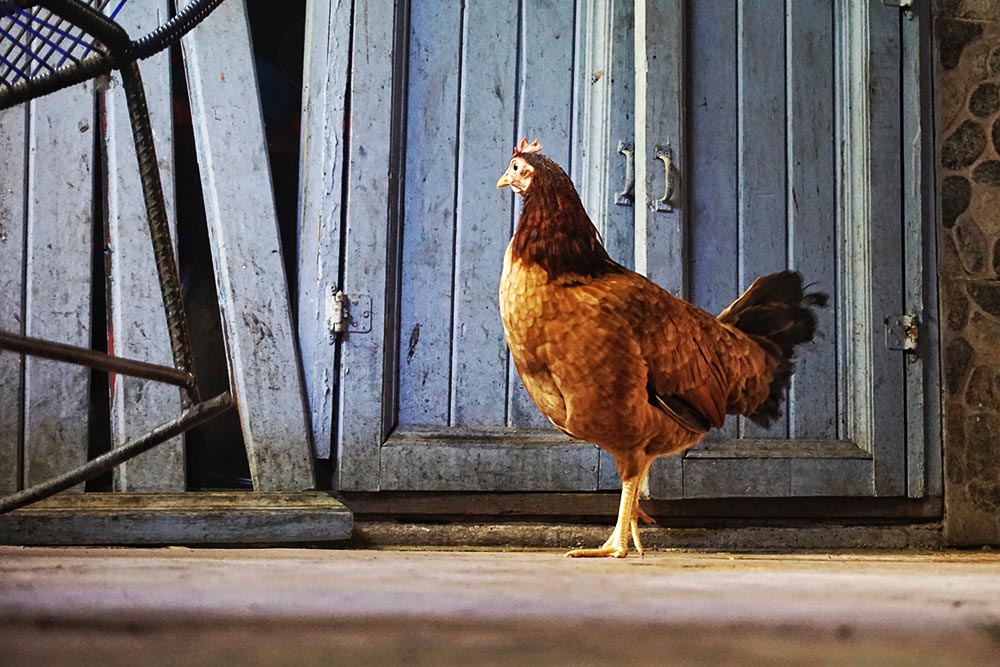 Instead of being woken up by howler monkeys as we were at our friend Maureen’s house, it was the crowing of roosters that woke us up in El Roble.

We weighed our options…

All this and more factored into our decision-making process.

Fernie ended up being the winner!

While there were a number of places that we would have loved to have gone — top of the list being California to see our daughter and grandkids — we ultimately decided to accept Rebecca’s sister’s offer to visit and stay with her and her family in Fernie, BC. Although we do not have any employment lined up there yet, it’s a beautiful town (the cover photo for this post was taken on Mt. Fernie in 2005), we can legally work in Canada, and seeing our family again will be good for the spirit.

We were able to find reasonably-priced plane tickets from San José, Costa Rica to Calgary and so booked them, solidifying our plan. Almost immediately after having done so, our stress level decreased. What next though?

Some have suggested that we go back to running charters. Unfortunately, there are some paperwork issues that make that challenging. We recently took note that both of our STCW certifications have expired (they are apparently only good for 5 years). Renewing them would be both costly and take some time. Additionally, although my Yachtmaster license is still valid, the commercial endorsement on it has expired and to renew it I’d need to get another medical completed. The trouble is that the only RYA-certified doctors are in Ft. Lauderdale, FL, Barbados, Trinidad, and the UK. Again, expensive and time consuming.

People have also suggested various work opportunities in the USA. While we do have work visas that allow us to work on boats in the US, we are not eligible for any other type of employment there. And as for working on boats, the above-noted challenges make that tough at this time.

Our good friend Douglas Montgomery contacted us on Facebook and asked if he could use some of his airline points to book us a hotel room in San José, prior to our flight. He ended up doing both that and booking similar accommodations for us in Calgary on the other end of our trip. It’s worth noting that neither Rebecca nor I have ever met Douglas, an American currently deployed in Afghanistan. In spite of that, he has displayed this type of generosity several times over. Thank you, Douglas!

Rather than ride to San José and then try to box up our bikes for the flights, we decided to take advantage of the fact that there was a nice bike shop just down the street from our host’s house. We visited the store, hoping to find suitably-sized bike boxes. While they definitely did have some boxes that they were willing to give us, we had to use four of them to cobble together packages large enough for our plus-sized Tumbleweed Prospectors. The end result was ugly but it should work. Fingers are crossed. 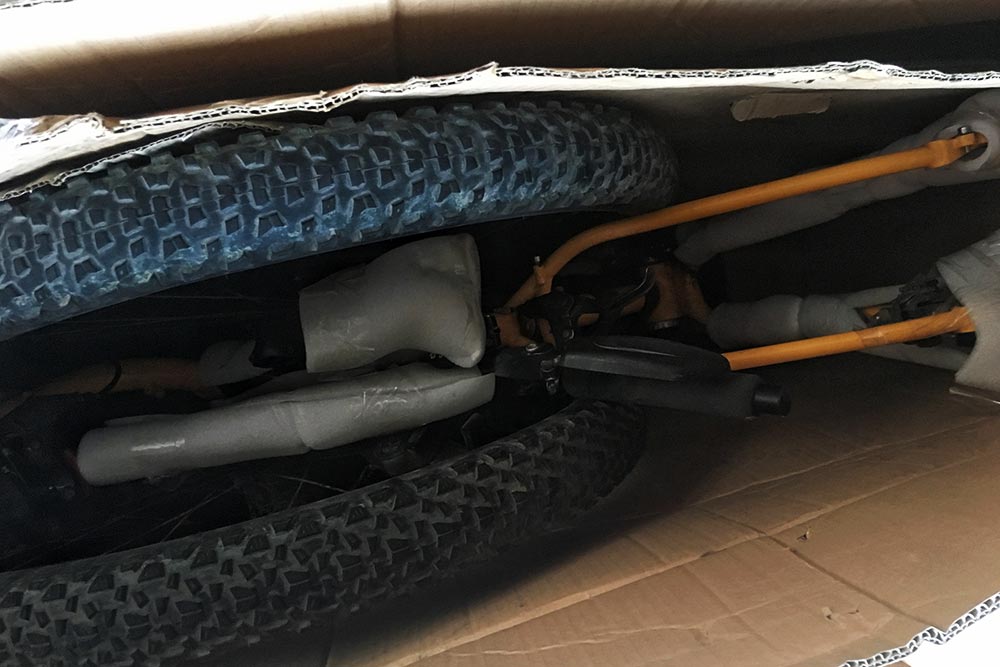 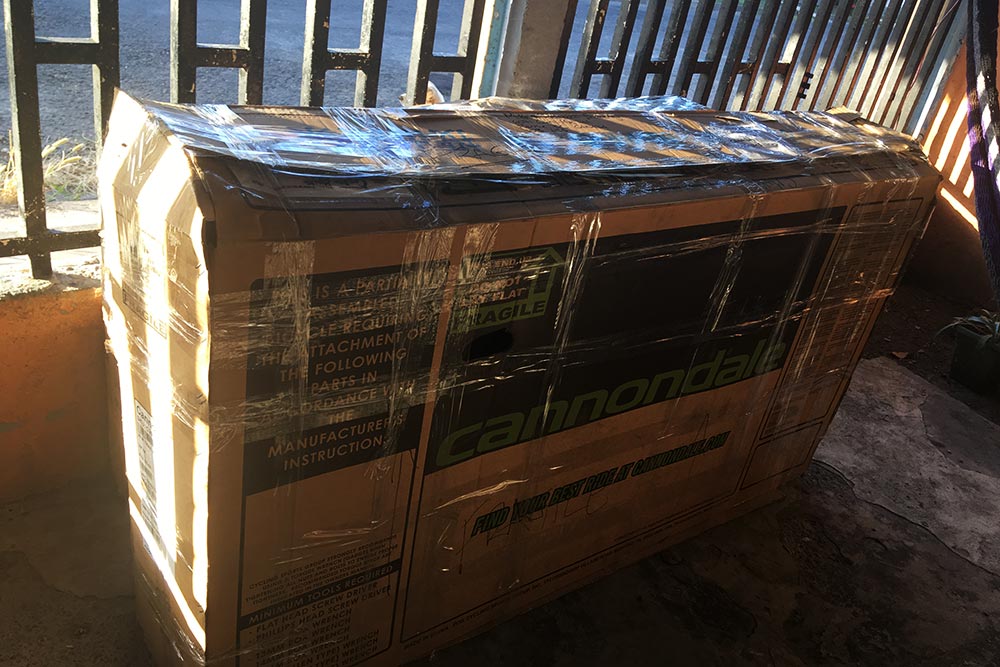 Ugly but it’ll have to do.

The journey to the hotel where I’m writing this post was relatively drama free but still not what most would consider easy. As you can imagine, traveling with two giant boxes and a number of small bags presents some challenges. We did make it though and today we hope to purchase a cheap duffel bag so that we can put all of our bikepacking bags together. 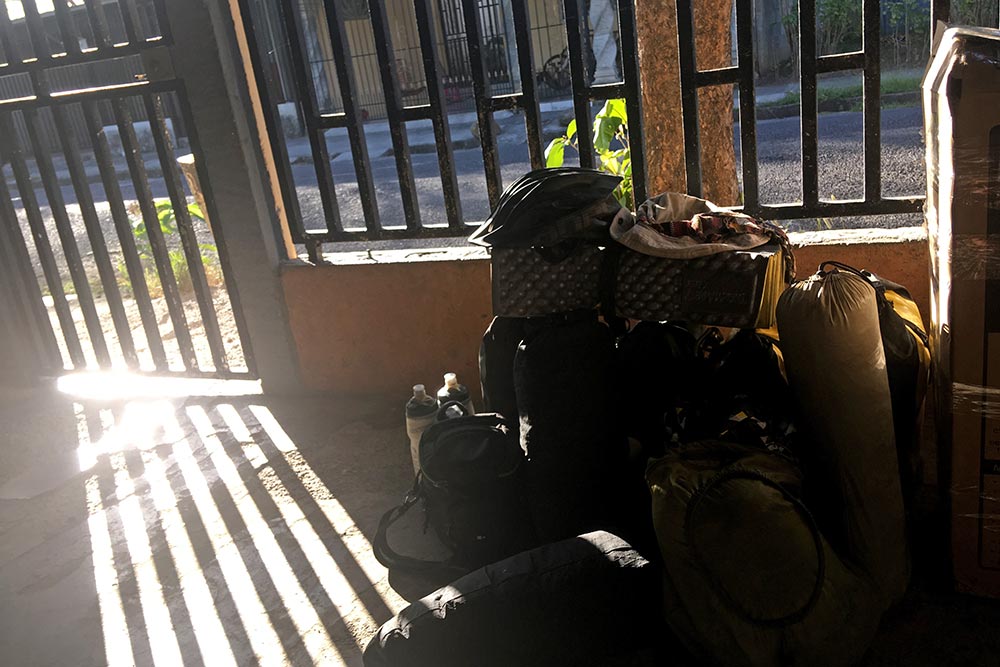 Our collection of bikepacking bags and panniers. 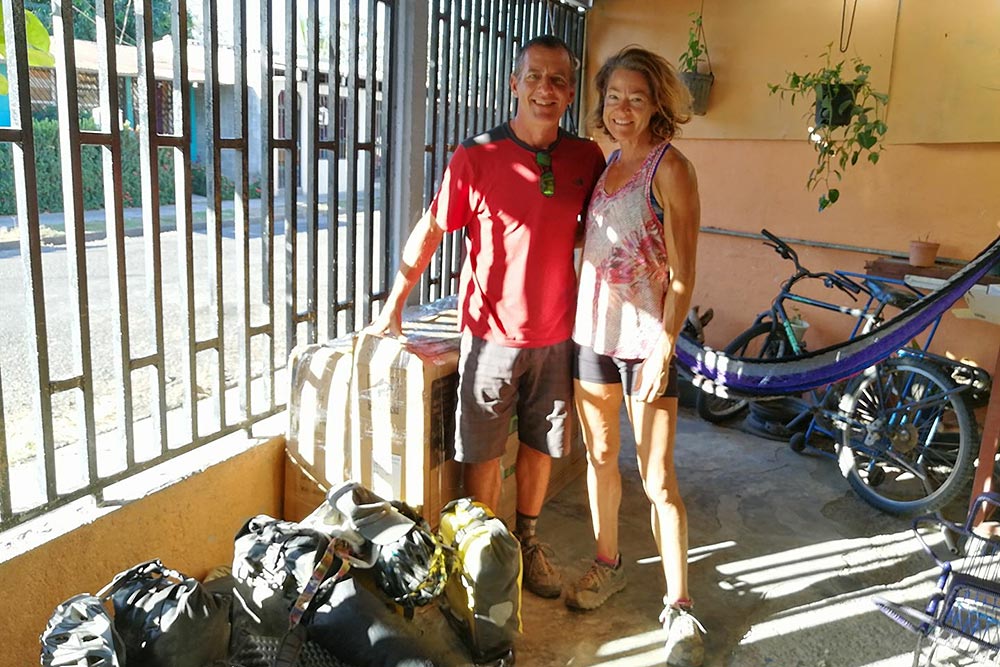 When we do arrive in Calgary, the first shock we’ll have to deal with is the weather. Yes, it’s cold there, and there’s snow. Apparently a lot of it! It’s worth pointing out that neither of us even own a pair of long pants, let alone snow boots. We do each have thermal underwear, hats, mitts, and warm, puffy jackets. Unfortunately, I woke up at 3:00 AM this morning to the realization that we packed both of our jackets in one of the bike boxes. Sigh! 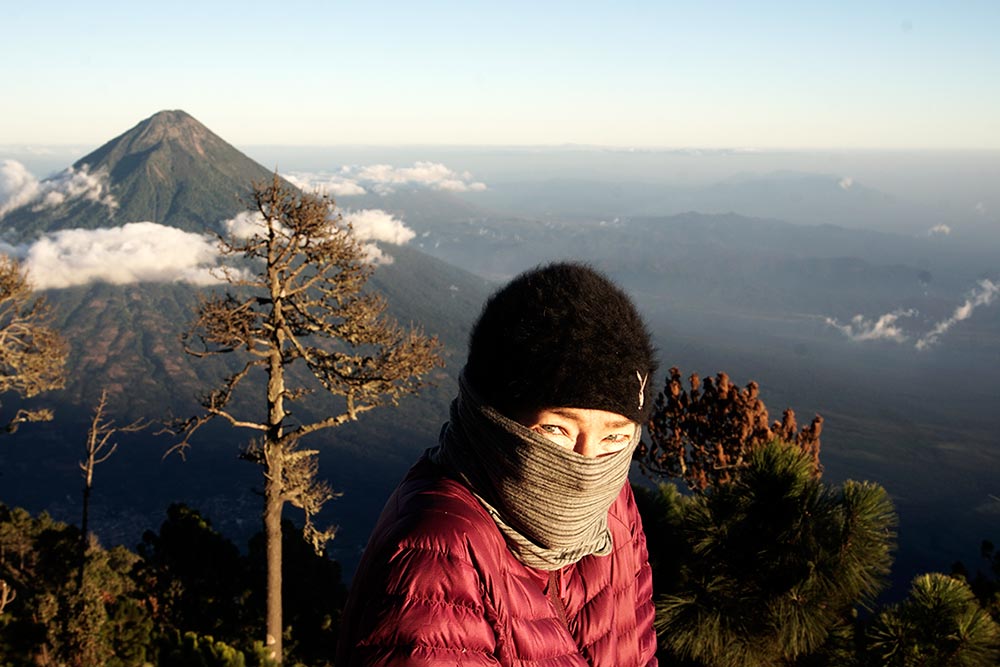 We almost froze on the volcano in Guatemala. How will we do in Fernie?

Our journey won’t be over then either though as we still need to get to Fernie from Calgary, a 300 km winter drive over the mountains. As we felt that the airport shuttle was too expensive, and we were reluctant to ask one of our family members to make the long drive to come and get us, we decided to purchase tickets for a Greyhound us. Unlike the non-stop bus that we took to San José, the bus to Fernie stops about a hundred times, or at least it seemed like that many when I checked the schedule. The bus departs at 10:45 PM and arrives a little after 5 in the morning. With that many stops, I can’t imagine there will be a ton of sleeping going on during the overnight trip. 🙂

Rebecca and I would like to offer our most sincere thanks to everyone who has offered us a place to crash, be that on a boat, a couch, or a bed. Thanks also to our friends who took time out of their busy schedules to call around to their friends, looking for work for us. To the following list of people who used the Donate function on our website to send us a contribution, your help is appreciated more than you will ever know. Thank you!

While we now have a direction, our challenge is still not over as we do still need to find employment. We have had some fun on Facebook the last couple of days, joking about who would employ a couple of vagabonds who spent their pre-travel years teaching kids and adults to punch and choke one another (For those who are not aware, Rebecca and I worked together in a very successful martial arts school that I owned and operated for 23 years before selling it to go cruising). Resumes will need to be created and ultimately, employment secured. If anyone reading this has a contact in Fernie who could use a couple of hard-working self-starters, we’d appreciate your putting in a good word for us. When you do so, feel free to send your friend the link to this blog. Our lives are kind of an open book. 🙂

The days of the week in Grenada