They say that schedules and cruising don’t mix and I would tend to agree. Since we’ve converted from cruising to work mode though, schedules and due dates have become a huge part of our lives. We’re now in the position of having to deliver goods (the boat) and services on a specific timeline. In order to accomplish that we have had to rely upon numerous tradesmen to commit to completing work for us on time. I am happy to report that all have done so, and then some.

Special thanks to the following Grenadian businesses (in no particular order):

A SPECIAL shout out goes to Nicholas and Mark from X-Marine, and all of the good guys that they have working for them.

X-Marine took on a couple of huge projects for us, most notably the davit reinforcement that I have written about several times. I still plan to do a detailed summary of that work for those who are curious about what specifically was done. In addition to that, they also modified the swim platform for us to make it into a grill table. I’m confident that project was one that they wished they had not undertaken!

Plagued with numerous setbacks, the repair of the swim platform (there were a couple of structural issues that needed to be repaired and/or improved) and the modifications for the table took X-Marine way more time to complete than they expected. So much so that Rebecca and I were pretty sure that they would not be able to meet the completion date that they had promised us. I was in constant contact with Nicholas though and he assured me that they would, and encouraged us to go ahead and clear out of customs so that we could leave at dawn on Friday as we had intended.

Would you believe that they worked all day and all night to get it done, and showed up on the boat at 3:40 AM to install it? How many companies would do that? None that I know of! Now, I’m pretty sure that our neighbors in the anchorage wouldn’t have been too impressed, assuming they could hear the noise from our boat. I’m sure that if they knew all that we had gone through to make this happen, and the timeline that we were operating under, they would forgive us. 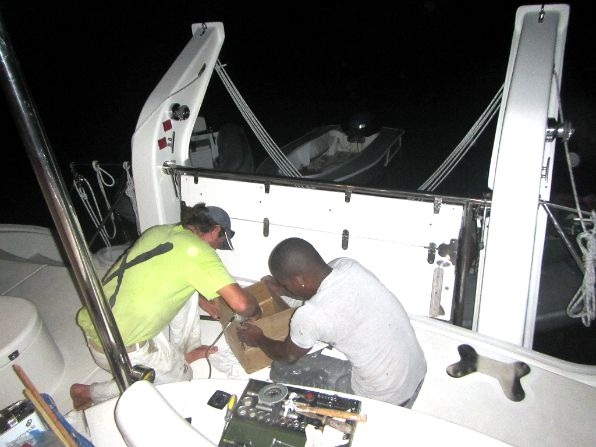 Anyway, by 5:30 AM the platform was installed and Nicholas and crew were free to leave to go home for a few hours before starting all over again. And with our Grenadian projects completed, we were free to leave. At 6:30 AM, only 30 minutes later than we had hoped to, we raised anchor and set sail towards St. Martin, a 376 nm passage.

Thanks to all of our friends in Grenada, both old and new. Although our time on the island was a lot different than in previous seasons, we still had a great time and left with many fond memories. Until next time. 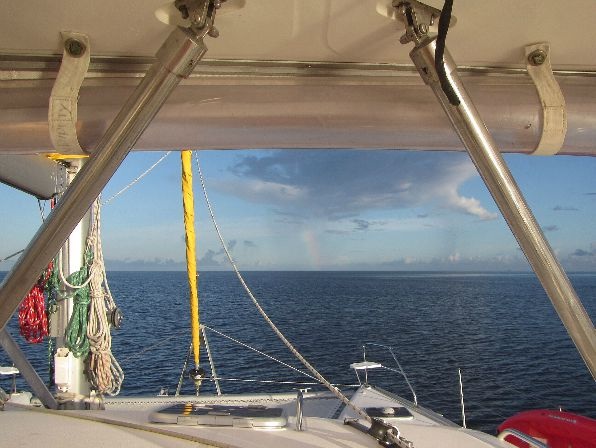 Heading out of St. George’s harbor. So long, Grenada.

The latest and greatest may not always be the best option.

Sailing on a one hull