Could a little ill-functioning piece of rubber cause the destruction of an expensive piece of gear, or even worse, your entire boat? It’s possible, believe me. In fact, I can detail several times on our own boat alone where an O-ring has done just that. Take for example the time when a split in an O-ring caused our virtually new outboard engine to stop working. That was back in Georgetown, Exuma and resulted in us having to get a tow back to our boat. Damage to engine? Nil. Damage to pride? Significant.

A more recent example is our attempt at servicing our watermaker. Our failure to add a couple of required O-rings in the pump caused the unit to stop functioning altogether. That one could have been a big, expensive problem!

Those are no doubt valid equipment examples, but saying that an O-ring could be responsible for destroying an entire boat is a bit extreme, isn’t it? I don’t think so. In our particular case, we have two engines which power our boat and that redundancy gives us a nice safety margin in the event that we’re in the middle of some tricky maneuvering and one engine fails. The only thing that could cause both engines to die simultaneously is a fuel problem, which is why we’re so careful to filter every drop of gasoline that goes into our tanks. What I had failed to realize when we first started out though was that, if the O-ring in our pair of Racor filters is not making a good seal, air can get into the system, which can potentially lead to our engines stalling. This is not something that we want to have happen when navigating a narrow channel, or transiting under a bridge, and I say this from experience!

Yes, all of the above things have occurred to us, and I suspect we’ll have future run-ins with the little rubber devils, although hopefully not with those particular examples. Respect the O-ring… they serve a valuable function! 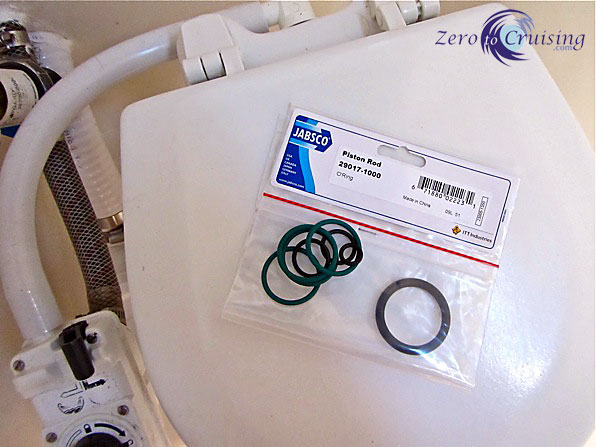 Why is this photo of O-ring being taken on the head? Knowing how much everyone loves posts about head repairs, I’ll save that particular story for a future post.

This part does what?