Remember I mentioned some downsides to tying the boat to the shore in my last post, specifically mentioning the challenges that could result if the weather were to suddenly turn nasty? That portion of the post, which I admit to writing during one of the rain spells yesterday instead of this morning, couldn’t have been more prophetic.

Look at the how calm the water is in the photo below. That is precisely what the conditions in Cumberland Bay have been like since we arrived here several days ago. Without a hint that the conditions could change, Rebecca and I, along with our Earthling buddies, made our way to shore late yesterday afternoon to meet some of our new friends, share a few drinks and hopefully build ourselves a bonfire on the beach. All of those things worked out as planned with the only hiccup being that the waves breaking onto the beach continued to rise higher and higher, threatening to extinguish our nice fire. 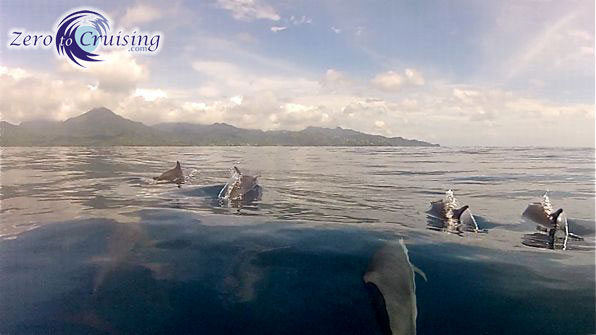 A screen capture from some HD video we shot during our sail to St. Vincent.

We were probably only on shore for a few hours when our growling stomachs prompted us all to return to our boats for dinner. It was only when we brought our dinghy alongside ZTC that we could see how much the conditions in the bay had deteriorated. An onshore breeze, perhaps combined with the higher-than-normal spring tide, had created a monstrous swell*. Our boat was pitching up and down so much that it was dangerous even boarding her from the dinghy. Concern for our boat’s safety immediately set in as we felt there was a serious risk of the boat’s movement pulling our anchor free. Being that close to land on a lee shore would have left us absolutely zero time to respond should that have occurred; ZTC would definitely have ended up hard aground, smashed about by the waves.

We had few options available to us. Either we sit tight and pray that our anchor holds or bail and head out to sea. It took only a few minutes of weighing the risks of staying to make our decision, we had to leave. The final straw? The owners of the Black Baron that I mentioned, who keep their own sailboat on a mooring right in front of their restaurant, cast off their lines and boogied out of the bay! If the locals are leaving, that’s a pretty good indication that we should too.

Leaving was, as mentioned, complicated by the lines we had securing us to the shore. We had no choice but to cast them off, leaving them behind for, hopefully, later retrieval. I should also mention that, in addition to it being very dark outside, the almost full moon shielded by a thick blanket of clouds, it was pouring rain. Just the conditions we needed to make this event all a bit more exciting!

Once we were free of the lines and had our anchor raised, we plotted a course straight out away from land. We had little faith that we would be able to find an anchorage that would provide proper shelter from the strange conditions so we resigned ourselves to circling around 5+ miles offshore until daylight arrived and hopefully the conditions improved. Neither Rebecca nor I, nor the boat for that matter, were prepared for overnight sailing, the weather change coming as a complete surprise to us. In spite of this, we immediately adopted a watch schedule to allow one of us to sleep while the other manned the helm, after we enjoyed a nice hot meal that is.

As the night gradually turned to day, the conditions thankfully improved, the waves subsiding and the wind returning to its typical east-too-west direction. At 6:00 AM we radioed in to our friend George on Earthling who was forced to stay put in the bay and weather the storm. He confirmed that all was once again well. After returning and dropping the anchor in our original spot, Rebecca jumped in the water to swim to shore, planning to retrieve the stern line that we had left attached to the tree. Neither of us were prepared for the shock of finding our line tangled in a huge ball of debris, locked together with branches, webbing, fishing line and misc. other trash that had been washed ashore. Fortunately Julian, a kind fisherman from the nearby town of Wallilabou, joined Rebecca to help her untangle the mess, a 30-minute ordeal, while I remained onboard, holding ZTC in place as best I could until we could secure the stern.

Was this a fun evening? It started out pretty good but to be honest, we really could have done without the ending. I will say that, even though the conditions out to sea were awfully uncomfortable, both Rebecca and I were 100% happier once we were out of the bay with some sea room for safety. Hopefully a situation like this doesn’t happen again in the near future. Just in case though, we’ll be keeping a much closer eye on the weather, guarding against the appearance of any more dangerous swells and offshore breezes. 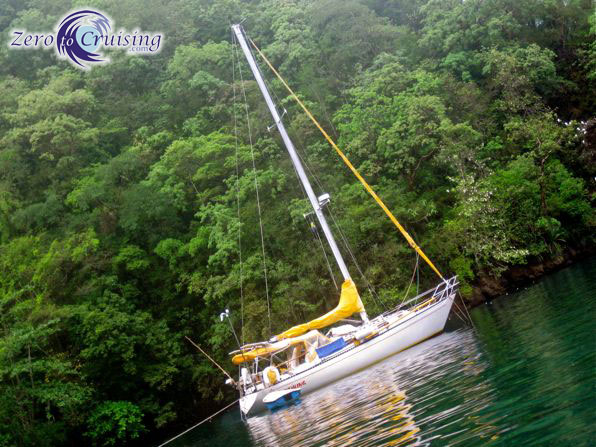 This is how calm the water was when we left to go to shore.
In a couple of short hours after this shot was taken all hell broke loose! 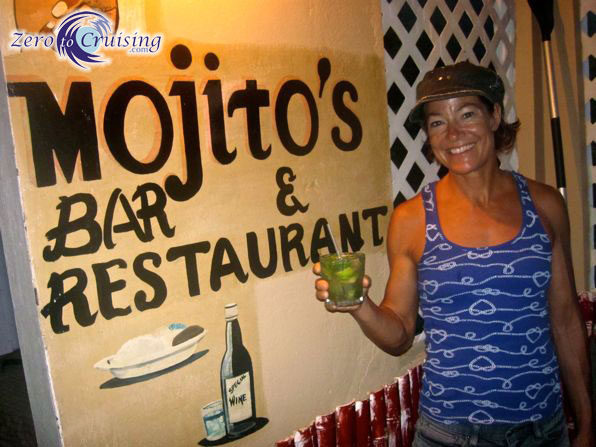 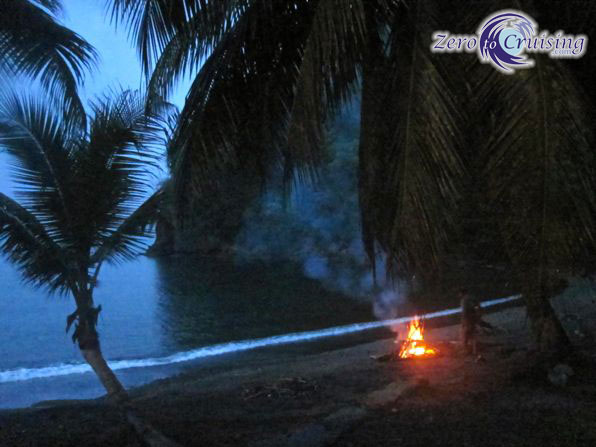 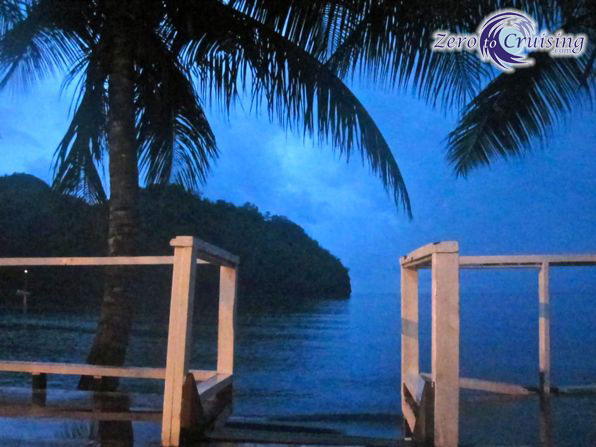 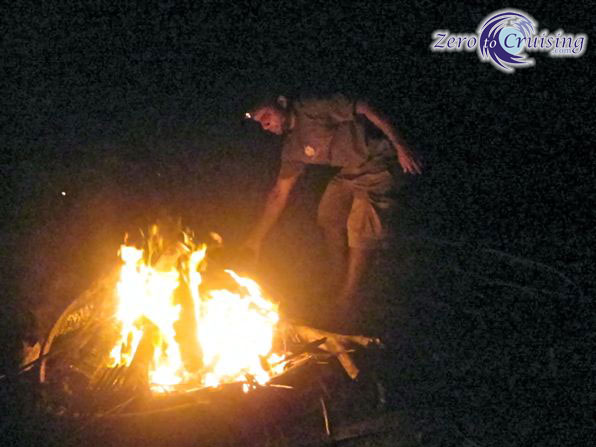 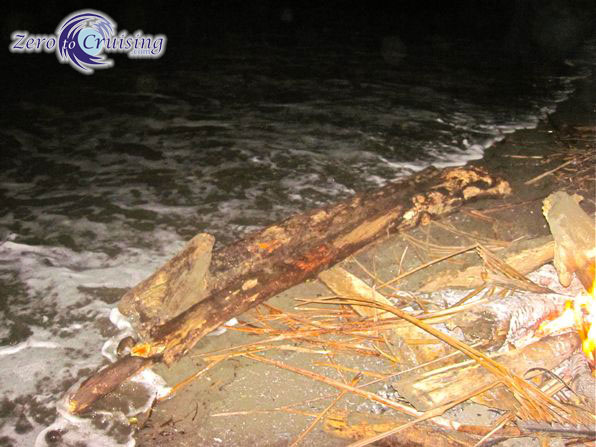 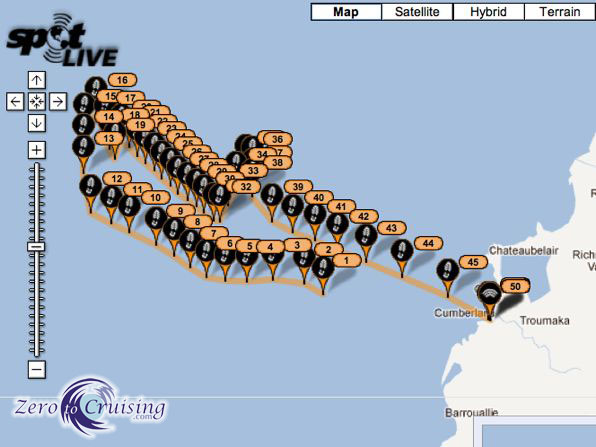 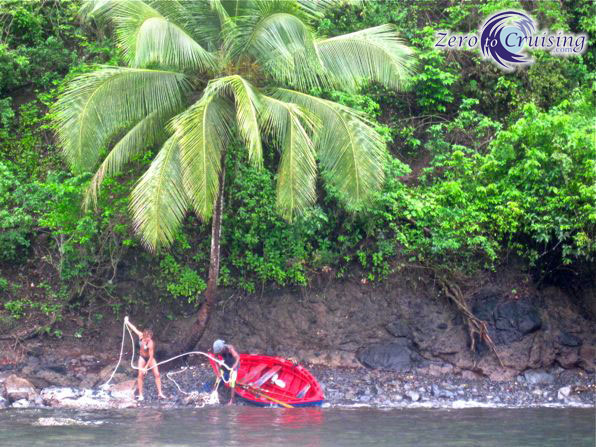 *I spoke with some of the locals here today and they told us that they have never experienced conditions like that before. Even hurricanes which passed by the island did not create waves that dangerous. Several boats did end up getting washed onto the shore. Fortunately neither ours nor our friends’ was among them!

“Where will you start?”