Let’s not meet in Barbados

I recently had a conversation with my sister Diane about attempting to coordinate a spot to meet up when she is down in the Caribbean early next year. She, along with some other family members, plan on visiting a resort in Jamaica in early February. She commented that, if it were possible, she’d like to grab a flight to an island that we could sail to in order to meet up. I explained that we’ll likely remain in the Windward and Leeward islands again this season (yes, we’ve decided to put the Western Caribbean on hold for at least another year, more on that later) and offered St. Maarten, Antigua, and St. Lucia as options. She did some checking and found that in addition to St. Maarten, Barbados was one of the most economical places to fly to. This got me thinking about Barbados.

To most non-sailors, my sister no doubt included, Barbados probably seems like most of the other islands in the Windwards. If you take a look at the chartlet below though, you’ll see that it lies a good distance east of the rest of the islands. Specifically it lies about 87nm east of St. Vincent and approximately 130nm ENE of Grenada. Remembering that the trade winds in this part of the world blow from the east, this makes getting to Barbados a bit of a tough sail. Impossible? Of course not. Long and uncomfortable? Quite likely. This is no doubt why Barbados only receives a tiny fraction of the boat traffic that the rest of the island chain does. 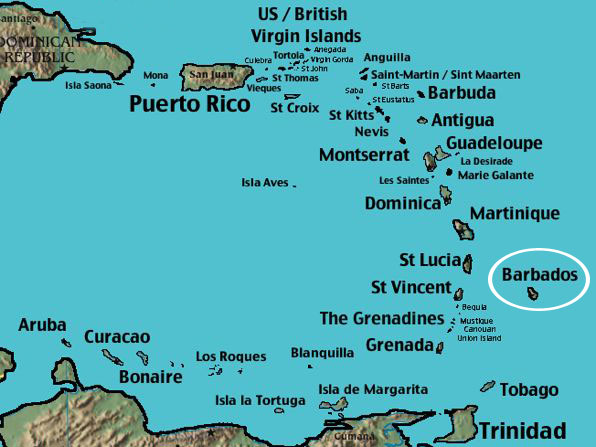 In spite of this, some people do venture to the island, including a couple of our friends, Wade and Diane on the Canadian sailing yacht Joana. I read their posts about Barbados when they first wrote them and again today.

“One of the reasons that we will be happy to leave is that this anchorage at Bridgetown, Carlisle Bay – is probably the worst anchorage that we’ve stayed in, in the past 3 years. There is no dispute about it. There are periods of time that it quiets down, and periods when it is downright nasty. The problem is that Carlisle Bay is not a natural harbour. It is surrounded by white sand beaches. There is a lot of maritime traffic. The Atlantic Sea bends around the peninsula and creates a harmonic roll that is well beyond comfortable (two foot waves with white caps that are not aligned with the wind). It got so bad in the end that we just couldn’t stand it by day and couldn’t sleep at night. We figured that we had two options: rent a hotel room or leave. In the end, we chose a third option, tying a stern line to a nearby mooring ball. This had the desired effect of pointing our bow into the swell, instead of taking the swell on the beam – and continually rocking the boat from side to side. It also had the undesired effect of taking our hatches out of the direct wind, so it became hotter inside the boat. You can’t have everything.”

To be perfectly honest, the above description, and the other things they wrote, don’t really inspire me to want to sail over a hundred miles to windward! Will we go there someday? Perhaps. Our experience may, of course, be different. But, to my sister and anyone else looking for a place to meet up, how about we not consider Barbados as a viable option.

It’s only one night, right?