Learning from the day charter boats

There are plenty of times where having detailed local knowledge pays big dividends for boaters. Having an awareness of where certain hazards are located, especially ones which are not well charted, is an obvious example. We wrapped our anchor rode around an uncharted wreck in Boqueron, Puerto Rico. Had we known where that wreck was located, it would have saved us some grief, and some chain! We’re at anchor in Cane Garden Bay right now and it’s beautifully calm. Boaters familiar with this area would know to not even consider coming here when there is a north swell running as it would be anything but calm. I also mentioned yesterday about our “secret” snorkeling spot. Many of the charter crews here have their own special places that they take their guests. All of the above would fit into the local knowledge category.

One specific bit of local knowledge that was shared with us by our friend Keith relates to the route that we now take when heading east from Charlotte Amalie. The southern coast of St. Thomas is notoriously uncomfortable when heading east, especially when the easterly trade winds are up. If we follow the lead of all of the day charter boats that make the run to Buck Island, at least a mile or more of that bash can be lessened, if not eliminated.

The entrance marks to the Charlotte Amalie harbor define the deep water channel. If, when leaving the harbor, we follow that route to the outer red marker before turning to port, we find ourselves exposed to the full force of the wind and waves. The first image below shows that basic path. Many locals have learned to use the reefs just off the coast to shelter themselves from much of that bashing. Instead of sticking to the deep water channel, we turn to port immediately after passing the Marriott Hotel and keep the reefs to starboard. In good light the reef area is easily visible and they are properly displayed on our Raymarine chart plotter. The second image below shows the basic route that we follow. While it may look scary being “sandwiched” between the shore and the rocks, when taking this path we have never seen anything less than 14 feet of water. 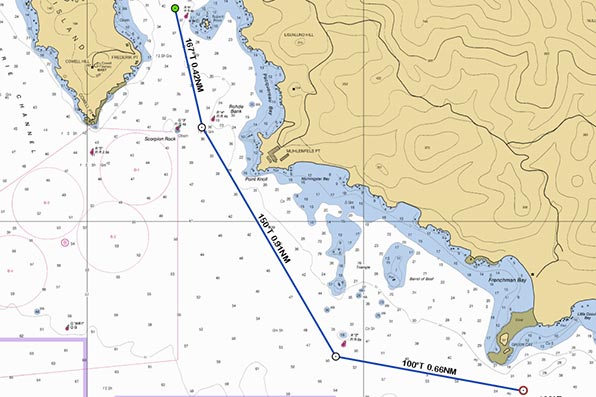 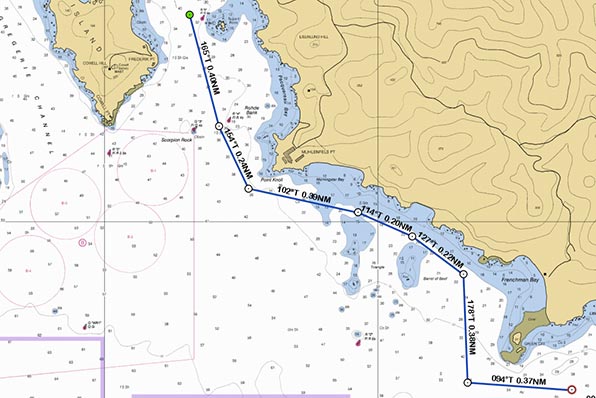 Of course, following this route is in some ways contrary to one of my basic principles. That being, to have plenty of sea room when transiting a lee shore. Given how much easier this makes the trip east though, I’m willing to make that allowance, at least until we make that final turn east after leaving Frenchman Bay and passing Green Cay. At that point, I get well offshore.

Warning: The above screenshots are obviously not for navigation. Check your charts before attempting what I have described, and do so only in good light!