Hello faithful readers. Thank you for standing by as we were offshore and unable to post. We have countless stories and photos to share but to get us started, here is a quick recap of our past week’s adventures. 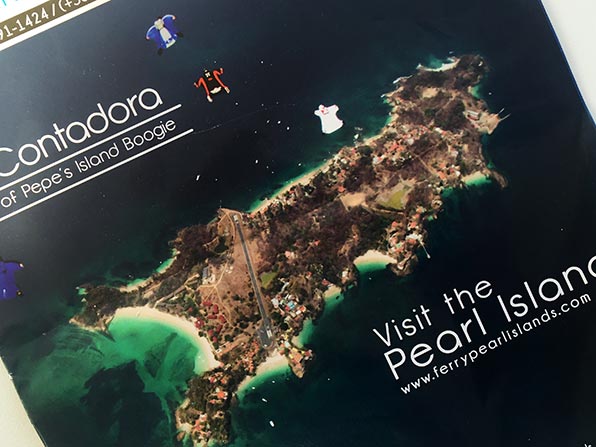 The sunset entertainment in an anchorage often involves the anchoring antics of the late arrivers. Frequently, with light receding and often less available area to drop the hook, the best spots having already been snapped up by those who arrived earlier in the day, it can make the job of getting set for the night a little more challenging. It’s seldom life threatening, at least until a big storm pops up. Last night’s sunset drama was a bit more serious though.

With the rally set to depart today, everyone gathered on the beach for a farewell party and barbecue. Unfortunately, Mother Nature was welcoming everyone to shore with a breaking surf. Landing a dinghy in such conditions is never easy. When the tender is laden with party goers who don’t want to get wet, it is even more sketchy. Luckily for many, a number of rally staff and crew members were there to wade out into the surf to try to prevent the dinghies from turning broadside to the waves and getting flipped. In fact, I don’t think a single one had a serious mishap. Watching from the shore though, there certainly looked to be some tense moments. 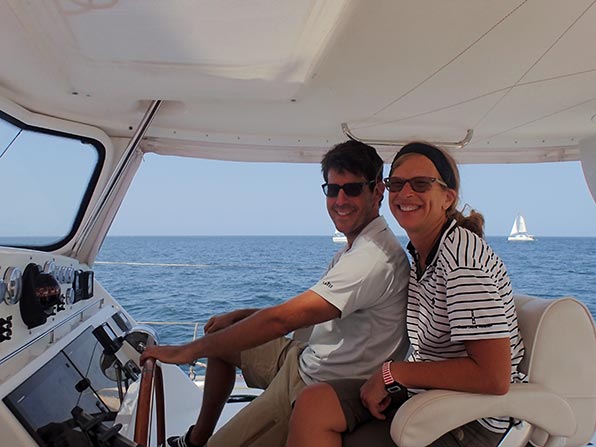 If you ain’t rubbing’, you ain’t racing. That quote from the Nascar inspired movie Days of Thunder could very well have been written about our beginning of the rally. As the seconds ticked down to the official 11:00 AM start, and we approached the line with main and screecher set, a boat cut in front of us leaving us no room to maneuver. Fortunately, the bump they gave us didn’t leave a mark, nor did it dampen anyone’s spirits. It did reaffirm for me that I’d rather not end up that close to a bunch of other sailboats while underway in what is our home, not a race boat!

The first day at sea was busy for the entire crew. With variable conditions, we went through every variant of sail plan that Two Fish has to offer. We traveled downwind with the main all the way up, and also with it reefed (this changed multiple times). On the bow we sailed with the genoa, the screecher, and the spinnaker, sometimes with two of them set opposing one another. We alternated between sailing on a broad reach, and wing on wing. In other words, we were pretty busy! 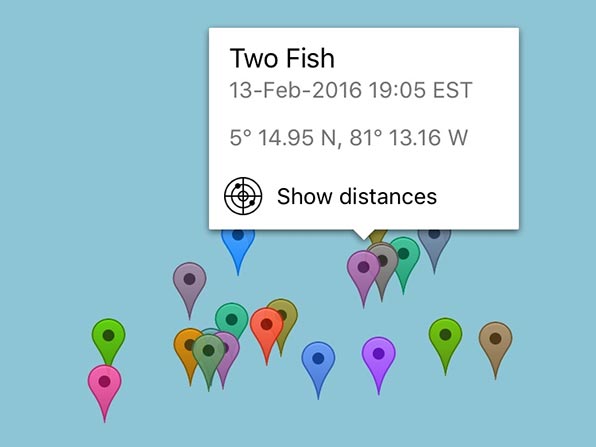 As I wrote above, the first day of the rally saw us very busy trying to maximize both boat speed and comfort by frequently modifying our sail plan. So much so that we didn’t even attempt to catch a fish. At the end of the day, when all of the rally boats checked in by SSB radio, it was extremely difficult for us to listen to the reports from the other boats, bragging of the fresh fish that they’d caught for dinner. We were determined to catch our share the next day. Unfortunately, even though we had all the right gear, we ended our first day fishing without landing anything. My excuse is that we were sailing too fast!

As with all of the boats in the rally, our efforts to speed our way to the Galapagos continued. The pack had thinned out considerably though, with only a few boats remaining in AIS range. By my estimate, we’re about in the middle of the pack, sailing pretty close to the rhumb line. 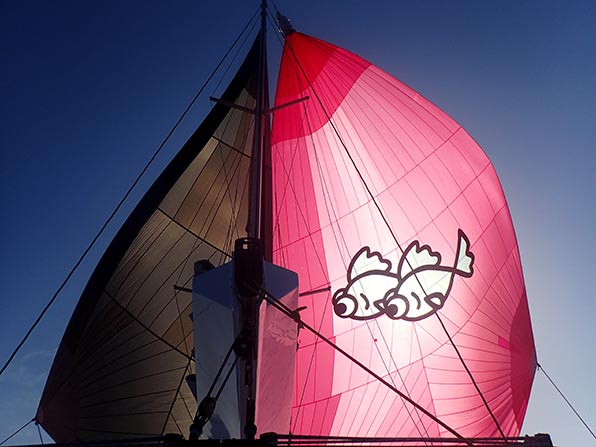 At one point, as we came on deck at 2:00 AM to begin our watch, Jason instructed us that we were going to raise the spinnaker and screecher in tandem. Although we were skeptical, after doing so, the boat rode amazingly well for the next four hours, until the breeze built beyond the safe operating range of the light-air sails, necessitating yet another sail change.

In the morning, with good light, we once again deployed our fishing lines. Unlike the previous day, this time our efforts were rewarded with a beautiful yellow fin tuna. Gail had threatened me with a vegetarian meal if we didn’t catch a fish. Perhaps that’s all we needed? 🙂

For the second time of the passage, we were paid a visit by a pod of dolphins. Other boats in the fleet reported seeing whales earlier on in the journey, and others said that they saw sharks. We’re keeping our eyes open! 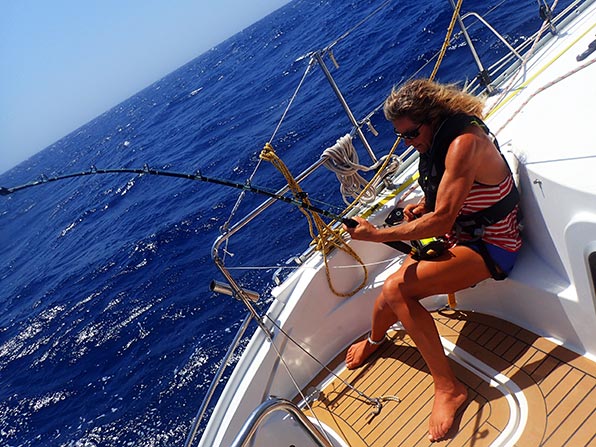 There is a list of foods that, upon arriving in the Galapagos, must be disposed of. Unprocessed fish happen to be on that list, so after landing our fourth yellow fin tuna (we’re no longer jealous of the other boats), we retired our rods for the remainder of the trip.

Later in the day, as we reached along in comfortable conditions, Two Fish was paid a visit by Davy Jones, warning us that, as we approached the equator, we were due a visit by King Neptune!

Part of the strategy in an ocean passage is choosing a route that will minimize the amount of motoring that is required. While it’s always nice to sail on short, inter-island hops, it’s not necessary. On passages where it’s impossible to carry enough fuel to motor the entire way, it’s critical. Jason put a lot of time and effort into planning the routing for this trip, downloading updated weather reports a couple of times per day, Partly due to his work, and no doubt partly due to luck, we have made out extremely well. While some boats in the fleet have been racking up the engine hours, we have probably used ours no more than 20 minutes since the beginning of the rally. Both because sailing is much nicer than burning diesel, and because every hour spent motoring works against us when calculating the rally’s standings, we are very pleased with how we’ve been making out. 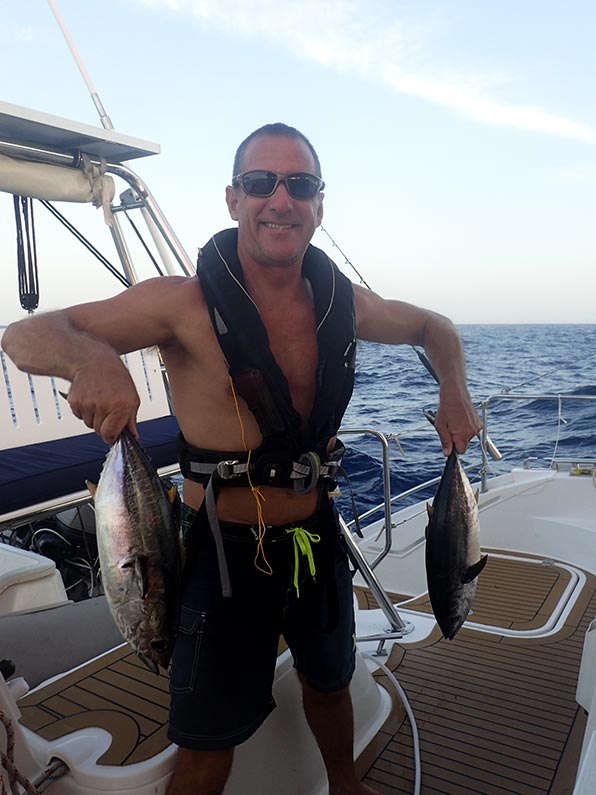 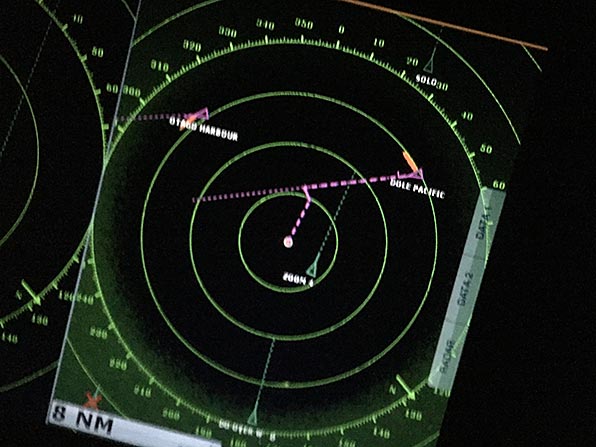 There are now about 4 boats in AIS range of Two Fish, all of us making way towards the Galapagos very close to the rhumb line. At one point during the early morning hours, two cargo ships showed up on our chart plotter, their AIS track indicating that we were due to cross the bow of one of them by a mere 100 meters! Needless to say, we changed course by a few degrees, setting us up to pass the ship’s stern. We love AIS, especially when sailing at night! Although we have debated the subject in the past, we have decided to update Frost with an AIS transceiver instead of a receive-only unit. It’s just too valuable for other boats to be able to see our position, in addition to our being able to see their’s.

By 12:00 noon, virtually all trace of wind had left us, and with no breeze to propel the boat, we were finally forced to turn on the engines. I have to say though that if you’re going to be forced to motor, as every boat in the ARC fleet was, it’s wonderful to do it in the glass-like conditions that we experienced.

Later in the afternoon, as foretold by Davy Jones, we were paid a visit by King Neptune and his Queen. A trial was held on board Two Fish where Rebecca and I were forced to defend ourselves to the King against a long list of transgressions. Apparently, we made out OK, and were granted permission to later in the day, cross that famous line, the Equator.

As the sun was setting, with more than enough tuna left for our final dinner at sea, we did a close pass to one of the other World ARC boats and tossed them a bag of fish. They replied later in the evening that it was a wonderful treat. Sharing is caring!

At exactly 10:14 PM, Two Fish crossed the equator, transforming Rebecca and I from mere Pollywogs to Shellbacks, a significant achievement for a sailor. Listening to the radio traffic of the other boats crossing that line of latitude reminded us of New Years festivities. In our minds, as each of the boats worked hard to get there, this is something that is definitely worthy of a celebration! 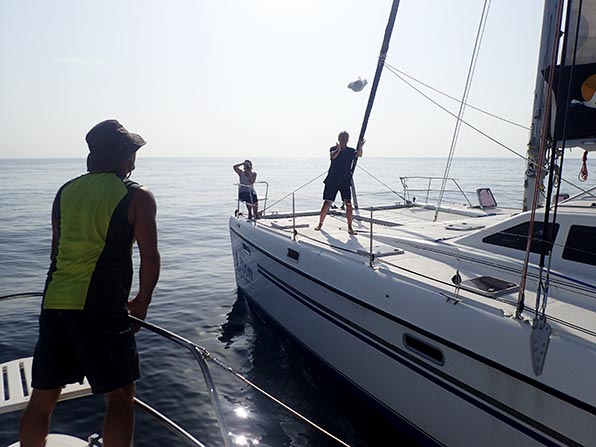 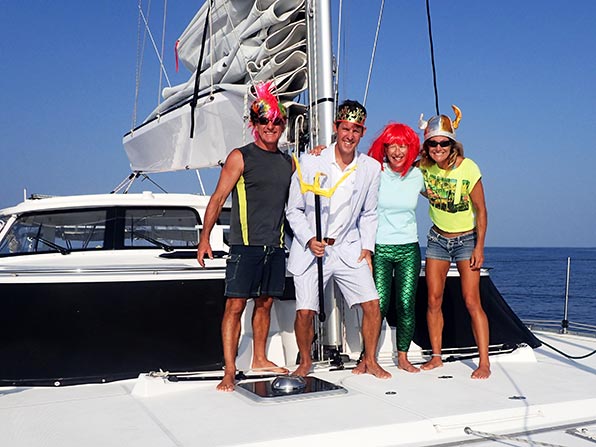 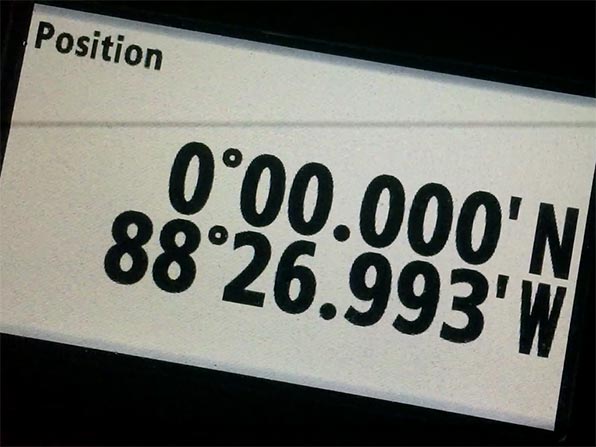 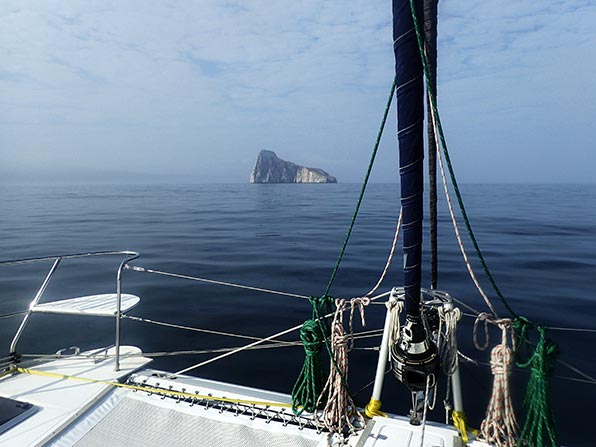 Shortly after sunrise on the 17th, Rebecca and I were roused from our sleep by Jason’s call, Land Ho! Actually, to tell the truth, we missed his shout, but we did get up when he banged on our hatch.

Our first site of the fabled Galapagos islands was fantastic! There was a misty fog surrounding them, and an impressive surf breaking on the shoreline. At exactly 9:29 AM UTC-6, we crossed the rally’s finish line. While not the first boat to arrive, we were definitely not the last either.

Shortly after approaching the land, we were welcomed by turtles, manta rays and sea lions swimming alongside the boat. Motoring along the coast to our anchorage, still in glassy conditions broken up with just a gentle ocean swell, the crew set about, once again, making the boat look beautiful. Rebecca and I took on the task of washing the exterior of Two Fish, and with the watermaker running to keep up with our fresh water usage, we gave her a well deserved bath.

The check in procedure for the Galapagos is complex, necessitating a visit by no less than 12 separate officials, including two divers to check the state of the underwater hull! Until those formalities are completed, the crew is boat bound. Even though we arrived in the early morning, we didn’t complete this check in procedure until after 5:00 PM, no doubt due in part to the fact that numerous ARC boats all arrived on the same day. The officials were extremely pleasant though, and although we were eager to get to shore and have some dinner and drinks to celebrate, we were simply happy to have arrived and to have passed the inspection*. 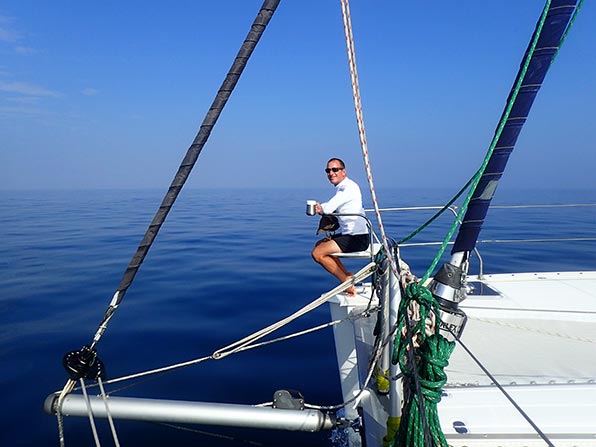 *You may recall me writing about boats being turned away for having barnacles on their boat’s bottom. Unfortunately, this actually occurred yesterday to one of the World ARC vessels. They were sent 70nm offshore to clean their bottom (again — they actually paid a diver to do it but apparently he did an extremely poor job) before they can return. As the current is flowing towards the Galapagos, that is going to be an awful trip. We feel very bad for them.

“How long are you going to do this for?”

Video of us going over a waterfall!!!