Just trying to get ahead

OK, the toilet puns are getting more than a little old, I know. But unlike what most normal people were doing this afternoon, enjoying the beautiful day, I was instead disassembling our toilet again. We had been experiencing a relatively intermittent problem with it, specifically having the bowl fill up, without either Rebecca or I adding fluids to it. This just isn’t supposed to happen. We had managed to catch it before the bowl overfilled thus far but I was concerned what might happen were we not around to catch it before it overflowed! Can you say Yuck?!?!

Once again we consult the oracle Google to see what he had to say. Replace more gaskets of course, one of which has what I think it a pretty cool name for a toilet part: a joker valve! Once again David came through by having said parts available on the boat. A short time later with only a small amount of gross fluids spilled and our Jabsco MSD is once again functioning.

This wasn’t our entire weekend of course. We spent the majority of it playing in a volleyball tournament. The tourney, repair work and provisioning (that’s marine talk for grocery shopping) left us no time for sailing. Tomorrow looks to be different though. We have plans to take a couple of friends out sailing and the forecast is calling for a rain-free day, one of the few this summer!

In other news our friends Jennifer and Al finally escaped from the marina. They began their bahamian journey by first taking off to Amherst Island. A small step but at least they were able to get on their way. Congratulations guys! We are looking forward to hearing about their fun as it unfolds. 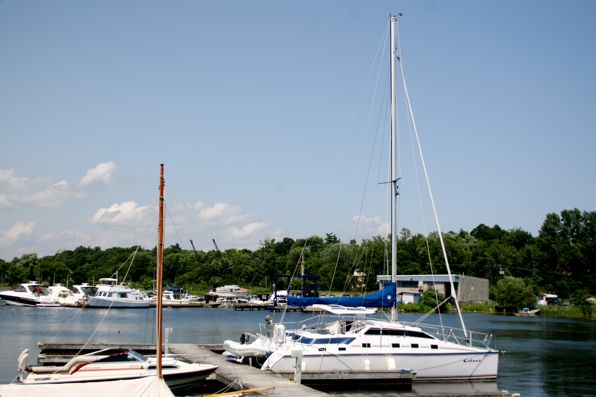 Katana is looking pretty lonely on H-Dock now that S/V Ruth has left!

One more thing… since we couldn’t find room for a dance pole on Katana, Rebecca sought out and has found an alternate dance/exercise vehical: Hula Hooping! Here she is playing with her new toy, a folding hula hoop, on Katana’s tramp: 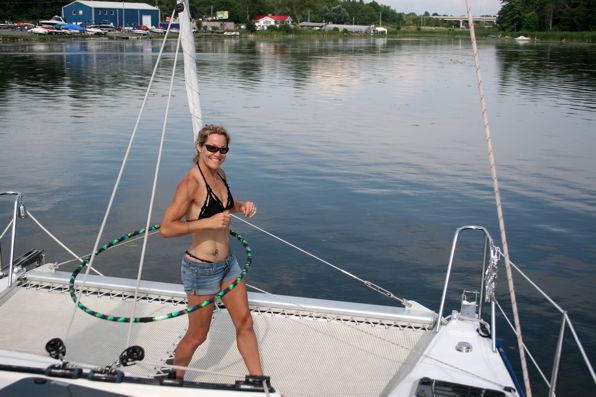 Blogging at its best

Not just seeing but being seen.