It’s tough to blog without a computer

To say that I rely upon my laptop would be somewhat of an understatement. A visitor from another planet might mistakenly think that, like my arms and my legs, it was just another appendage growing out from my body. Knowing how much I use this tool you can only imagine how distressed I was when it suddenly stopped working about a month ago. Yes, the computer was fine, we went out for a bit and when we returned, it wouldn’t even turn on. Not cool!

I initially suspected it had something to do with the AC adapter but even trying 3 different units failed to bring it to life. As any savvy user would do when faced with a computer problem, I consulted The Oracle for answers (assuming they have a spare computer to actually do the search that is). The answers I received were less than helpful: take the computer to the Apple Genius Bar we were told. Thanks a lot Brainiacs!

Unhappy with those search results, I posted a query on Facebook explaining the issue. It wasn’t too long before I received a response from my Apple-dealer friend back home who passed along the bad news that he suspected it was the Mother Board. The Mother Board? Mother $%#^er! How was I going to deal with that down here?

Here is where opportunity and good friends come together. As it turned out, John and Holli on Shiloh, who were anchored just behind us, were on their way back to Canada in the next couple of days. They volunteered to take the computer home with them and deliver it to an Apple dealer near where they were visiting. My Apple friend had since initiated a repair ticket for me so when they dropped into the store, the technician already had the basic info in his system.

As with most electronic repairs these days, the tech guys simply swapped some parts. The Mother Board did turn out to be the culprit and once replaced with a new one, the laptop operated as it should. Now all they needed to do was get it back here. Because our friends were not returning for some time, we planned to have them ship it. We learned that to have it go by Fed Ex was going to cost $250.00 where as to ship it by Canada Post Express would only cost $100.00. Tough choice. As you might guess, we chose the latter option. Over the course of the next three weeks though I frequently came to regret my decision to cheap out. Although Canada Post had issued us a tracking number it was next to useless, only telling me that the computer had left the country and was in transit. I know from previous experience with Fed Ex that their tracking numbers allow you to follow the shipment from airplane to airplane. I guess that’s what the other $150.00 pays for. That and a much faster delivery!

On Thursday morning, after hearing nothing of the shipment for weeks, I was surprised to receive an automated text message from Grenada Post letting me know that the computer had finally arrived. It was still not in my hands though, Rebecca and I had to make a trip into the city to acquire the package from customs.

Dealing with customs agents is always a bit of a mystery because you never quite know how they’re going to treat you or your shipment. When I explained to the agent the story behind the computer she gave me a stern look and told me that we were really supposed to bring the computer into the customs office before shipping it out to get a special form for it. This form, when the computer was shipped back, would show the customs agents that the computer had already been in the country and that it was not simply a used computer that I was importing. Fortunately the repair notice included with the computer, which showed what had been done and that I paid $0.00 for it, and my pleasant smile and pretty green eyes, convinced the nice (female) agent to let us have the computer without paying any duty. I did promise to acquire the aforementioned form should I ever have to do something like that again in the future. 🙂

Is the computer working? I am happy to report that yes, it’s as good as new. Huge thanks to John and Holli for their efforts in getting it repaired, and to Rebecca for relinquishing her laptop to me for the past month. You all get gold stars in my book! 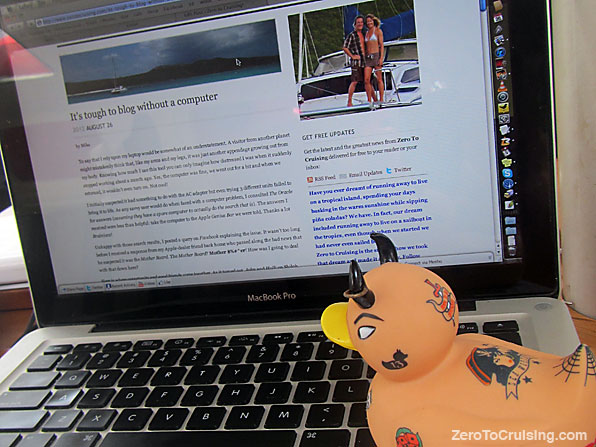