It’s right to turn to the right

When I was taking my Yachtmaster prep classes back in Grenada, our instructor Alex was quizzing a couple of the other participants about the nautical “rules of the road.” These gentleman, who actually worked on ships for a living, told him that when on a potential collision course with another boat, they simply “get out of the way.” While that sounds OK in theory, the practical matter is that there is a proper way to avoid collision and a less-than-proper way. While it’s important for the give-way vessel to take evasive action (and the stand-on vessel to stand on!), it’s just as important for the other ship’s helmsman to know what you’re going to do.

Take for instance the situation when two power-driven boats are coming at one another. In busy waters like the Virgin Islands, this happens all the time! Have you been walking down the sidewalk with someone coming the other way and when you tried to avoid him/her, the other person moved to the same side of the walkway that you did? Then when you switched to the other side, they simultaneously switched as well? And so on. Isn’t that frustrating? Now imagine doing that uncomfortable dance in a large, difficult-to-stop boat traveling at 6 or more knots! Not cool.

Turn to starboard, not port!

If there is even a hint of hitting the other ship (if you considered the question “will we hit or not” then it’ll be too close!), the correct response is to make an early and obvious course adjustment to starboard. If both vessels do this then they will pass port to port. Note also by turning to starboard, you present your port side to the other ship making you the stand-on vessel. This would not be the case if you had turned to port. 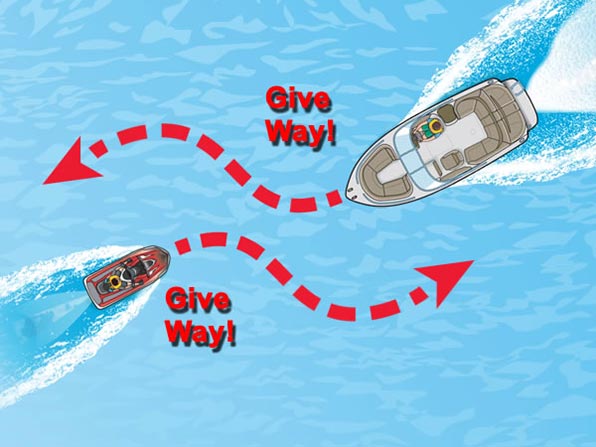 If the vessels opt not to do this, or if circumstances don’t allow it, you’ll often hear them contact one another on the radio to confirm their intention of passing starboard to starboard. Many ships will also confirm their intentions via the VHF even if they do intend to pass port to port. Although I’ve never actually seen this done in real life, they could also let the other vessel know which side they intend to pass on by sound signals: one blast of the ship’s horn equals port to port, two blasts equals starboard to starboard.

In other news, happy birthday Mr. Marley. Your music lives on around the world!

Let’s not add to the trash

A creative use for the dinghy!