It’s not only metal that gets rusty

We spent 2 months in Georgetown. That’s two months without raising our sails, save for the one or two times we put them up to make repairs. That two months is just a bit shorter than half the winter back in Ontario! I’m sure most people realize that there is a fair bit of stuff that goes on to make a sailboat run smoothly. There are systems to remember, events that need to take place in a particular order, some of which require a fair bit of timing to pull off successfully. Let’s just say that we’re a bit rusty.

Our first day away from the “hustle and bustle” of Georgetown (haha) was really a non-traveling day. The truth is we knew that trying to get up super early and have a big travel day after the farewell party wasn’t going to happen. So instead, we announced our departure on the radio net and retreated just four miles down the harbor to anchor by Guana/Fowl Cay, staging for today’s departure. We snorkeled, we explored a bit, we prepped the boat and we relaxed, retiring early.

Today, our real travel day, began early. We set the alarm to listen to Chris Parker’s weather forecast on the SSB radio and then, with confirmation that no ugly stuff was awaiting us outside the harbor, set off into the sound with several proposed destinations plotted. Van Sant recommends those setting off early from this spot exit the harbor through the Fowl Cay exit, as opposed to the larger and more frequently used North Channel Rocks exit. Why? Because when leaving in the early morning, or returning late in the afternoon, the North Channel Rocks exit places the sun right in your eyes. Just after raising anchor we could see, or rather NOT SEE, exactly what he meant. We took his advice… Fowl Cay exit for us. 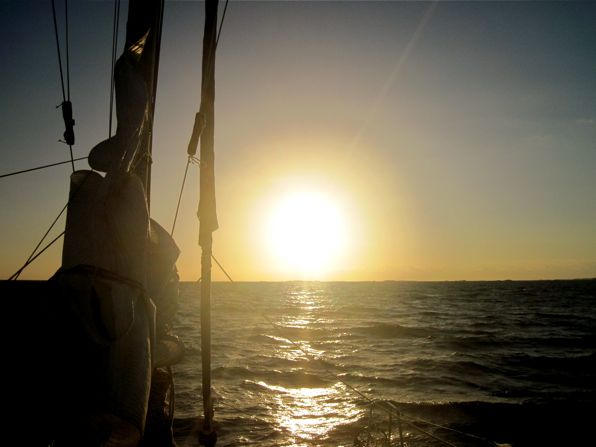 This is what it looked like as we motored towards the North Channel Rocks exit. Shortly after this pic was taken we turned hard to port and had the sun on our side.

What did we find out on the sound? The winds were as forecast, about 15 knots, and as we have also come to expect, directly on the nose. 🙁 We motor-sailed, we sailed and we motor-sailed some more. Ultimately, about 6 miles outside of Calabash on Long Island, one of our three planned stopping points, we dropped the sails and motored directly to the entrance. Although this isn’t a bad spot, we had really hoped the winds would have allowed us to make better headway, getting us to Conception Island at a decent hour (that means with good daylight remaining). Alas, Conception will have to wait until tomorrow.

Conception Island apparently has some of the best snorkeling in the Exumas. What it won’t have is internet so, loyal blog readers, please be patient if you don’t hear from us for a day or so. We promise we’ll be back. 🙂

We made it! Was there ever any doubt?