It is the rainy season!

In years past, it seemed like every day we had intended to head into town to go shopping, it would rain like cats and dogs. So, perhaps that was the cause of yesterday’s sogginess because we had scheduled such a trip. Both Rebecca and I woke up yesterday when the steady rain that had been falling increased rather suddenly to a torrential downpour. Accompanied by thunder, lightning and winds reported by others to be in the 35-40 knot range, it caused a bit of excitement in the anchorages. 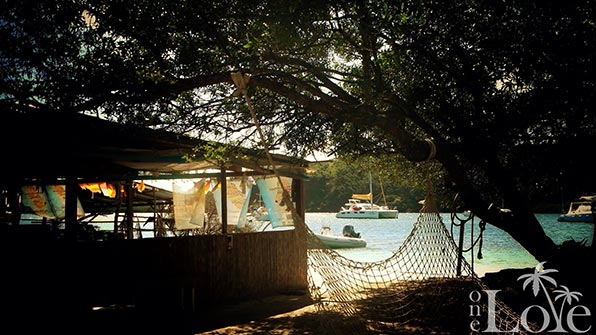 One Love at anchor just off Roger’s Beach Bar at Hog Island, Grenada.

At one point, shortly after I had woken up, I looked out the window in our head (bathroom) and noted a large sailboat beside us. One Love had been swinging on her anchor chain a bit and admittedly, I was still a bit groggy from having just gotten out of bed, but I couldn’t immediately figure out where that boat had come from. Just then Rebecca called down to me to say that a boat had dragged anchor. Upon closer inspection, and now fully awake, I could see that this was the case. The couple on board the boat in question were out on deck in their raincoats, working hard to raise their anchor (with their manual windlass) and keep their boat under control in the crowded anchorage. Fortunately they managed to do so and re-anchor elsewhere with no further drama. Reports came in later that several other boats had been faced with similar issues, and others had canvas torn from their boat. Not good. I am happy to report that One Love stayed just where we put her, our Mantus anchor holding us fast.

Even though that squall had passed, it appeared as if the rest of the day was going to have similar bits of rain so we cancelled our shopping plans and stayed on board. Perhaps today will be a bit dryer. You never know though, it is the rainy season.

Getting rid of the bubble

Boats are like people, they thrive with attention and affection!