It couldn’t be that easy

After securing our kayaks on our new racks yesterday, we raised anchor and began heading east towards the BVI. Our first order of business was to acquire internet as our guest Julie had a couple of real estate deals that she was tending to. Before we headed south, we had met with Barry Payant of ALGLink. Barry offers BVI based internet using Digicel towers and we had received good reviews of his service from our friend Steve on Alternate Latitude. After receiving the details of what he provides, we had planned to get hooked up once we made it back to the Virgins. Now that we are here, we just had to meet with him to make it happen. 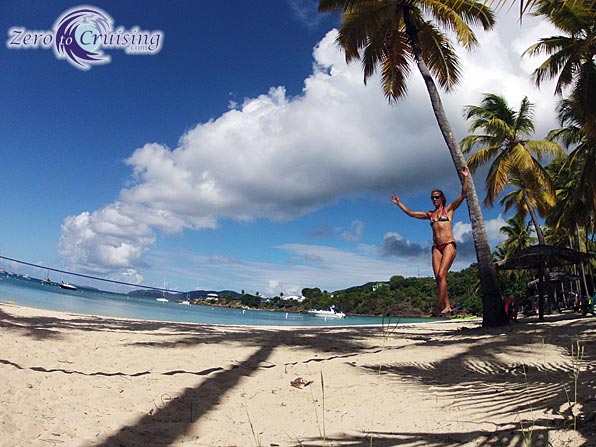 With a few emails to coordinate the details, we made plans to meet with Barry in West End Tortola, the port where we would be clearing the boat into the BVI. After grabbing a mooring ball in the bay, Rebecca and I planned to jump in the dinghy and quickly run to the customs office to complete the formalities before picking up Barry on the other side of the bay. Of course, some times quickly just doesn’t happen. After lowering the dinghy and climbing aboard, I was disappointed to find that the engine would not start when I turned the key. The lights on the console would illuminate but nothing would happen at the engine. It was obvious to me that it was an electrical issue so I set about trying to troubleshoot it.

Rebecca brought me my multimeter and I first checked the battery voltage. All was well there. I looked for loose wires between the battery and the engine. None to be found. I removed the cowling and looked for any obvious signs of trouble on the engine. Still I came away with nothing. I even removed a number of internal fuses and checked their continuity. All were good. At this point I was kind of stuck so I did what many people hate to do, I checked the manual.

As I only have the Owner’s Manual for the engine and not a true Service Manual, I did not have high hopes that I would find anything of use. As I read through the troubleshooting checklist and got to number 5 (I had already checked 1-4) a light bulb went off in my head: make sure the engine is in neutral. Doh! When we brought Michael and Julie back to the boat the night before, Julie had stumbled a bit in the tender and when I caught her from falling, my knee had inadvertently bumped the shifter. As soon as I read that line in the manual I remembered that happening. When I jumped back in the dinghy I found that, sure enough, the shifter was a couple of milliliters out of neutral. Sigh. I am not embarrassed to admit all this but that is only because I was the one who figured it out. If I had called for help and found out that that was the problem, I think I would have quit right then!

Anyway… once the engine was purring like normal, Rebecca and I completed our check in duties and then zipped off with Michael and Julie to rendezvous with Barry. Barry is definitely a pro and after bringing him back to the boat, he had his system installed and running within minutes. First impressions: it is fast! We have a service plan which gives us 50 gigs of data and we can connect up to 20 devices to our wireless router. Our guests will have no problem sharing all their exciting pics with their friends back home and of course, we’ll have no problem updating this blog, other than finding the time to do it that is.

For those being censored…