If not a Boreal, then how about…

OK, dream boat aside, what we have really had our sights set on for the past two months is an Amel (ignore the fact that they only talk about their new massive yachts on that link). And to be honest, until that time, I only had a cursory knowledge of what an Amel was, knowing only that our friends Sunny and John were cruising on a very large, beautiful and expensive one. Here is how we came to be infatuated with these boats though. 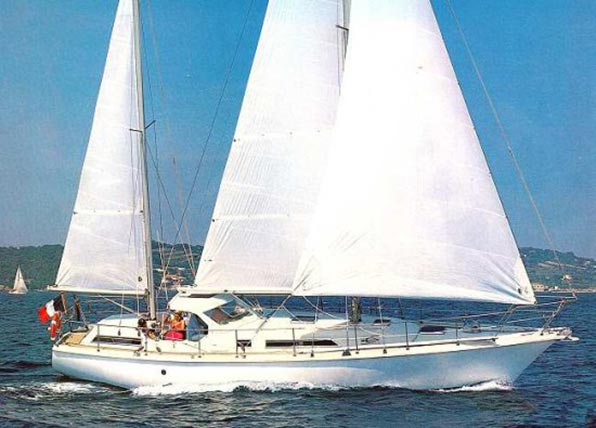 One morning, while on a break between charters, Rebecca and I were anchored in Long Bay, Charlotte Amalie. Rebecca had just finished up her morning workout when a man dinghied over to our stern to say hello. As frequently happens, he started quizzing Rebecca on her workout, telling us that he used to exercise a lot and wanted to get back into it. This happens a lot! I got involved with the conversation though and inquired as to what boat he was on. It turns out, he was anchored right beside us. “What kind of boat is that?” I asked. “It’s an Amel.”

The gentleman, nicknamed Pepper, went on to tell us how he had been working to refit the boat for world cruising but as he now no longer had anyone to sail with him, and he had just purchased some property in Puerto Rico, he was going to list her for sale. It was only days before this that Rebecca and I had really decided to pursue this Patagonia thing, and here was a guy beside us with a potentially suitable boat telling us that he was going to sell it! That was coincidence one.

We talked for a bit longer and he invited us over to take a tour of the boat. Pepper, a former boat salesman, was no slouch when it came to feature-benefitting his boat, and Amels in general. We were immediately sold on the Amel, but had the feeling that he was going to list it for a price beyond our budget.

Oh, and what was the name of his boat? Deep Purple. Which leads us to coincidence two. I had just that morning begun reading a book titled Winter In Fireland about a couple that sailed through Patagonia on a Vancouver 27! Anyway, on the first page of that book, I think the author describes their apartment floor as being “deep purple.” Weird, right?

Since that time, and becoming aware of what an Amel was, we have seen them everywhere! Especially during the period of time when all the cruisers heading south were passing through the Virgins.

We have scoured Yachtworld and believe me, we know of every Amel listed. We joined the Amel Owners Group on Yahoo and have read through countless posts on that site. We have contacted “the guy” in the US for Amel and asked him to keep his eyes open for us. We’ve had friends visit Amels for sale and send us reports and photos, saving us trips near and far to find a suitable one. And we’ve been invited aboard our friends’ Amel to share cocktails, and talk about the boats. Yes, we’ve done some research. 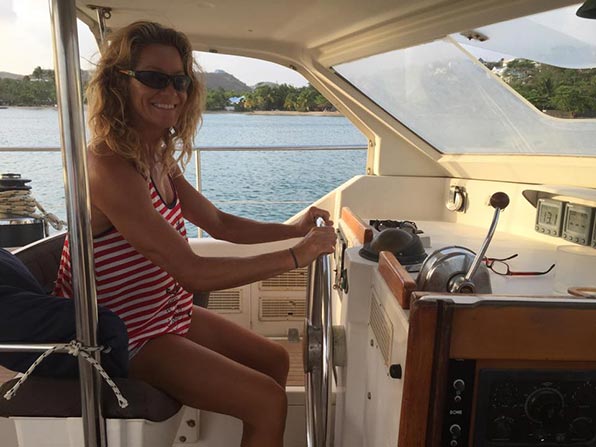 Just the day before yesterday, we had the chance to take a short trip on an Amel Mango and yesterday, during a break in the boatyard, we stumbled upon a 46′ Amel that we knew from our internet searches to be for sale. When we called up to the boat, that owner happened to be on board and with the help of a passerby as a translator (the owner only spoke French), we got ourselves invited on board. The boat was immaculate and obviously loved by the enthusiastic owner but unfortunately, it’s out of our price range!

The Amel which is most in our price range is the smaller 40′ Sharki and until yesterday, I thought there was only one for sale outside of Europe. I’ve contacted brokers over there too, and priced out deliveries in case we came across a suitable boat but were not able to bring it back ourself (that was back when we had a job). Yesterday morning, Rebecca brought to my attention another listing for a Sharki for sale and I immediately sent in an inquiry. As it turns out, the owner replied saying that he was both a long time reader of our blog AND was from Kingston, our “home” town. Another crazy coincidence, right?

Can a Sharki do the trip we want? Absolutely. In fact, THE guidebook for the region, known by some as the “Blue Book” or “the Italians” was written by people traveling on a Sharki. And they rounded Cape Horn in that boat!

I don’t know how all this is going to play out and we’re trying to not get frustrated by forcing the situation. Just like everything that we’ve done, the boat thing will all work out.

Sometimes the engine is needed, other times not.