I prefer my stuffing with turkey dinners

When it come to boating, it’s smart to not get trapped into hard and fast schedules. The past couple of days are an example of why. Having been in Prickly Bay for more than a week, we had hoped for a change of scenery, planning to move the boat to the St. George’s anchorage, closer to Saturday’s hash. Before leaving, I first wanted to have Richard, the owner of Turbulence, the company that replaced our standing rigging, do one last check to make sure that all was well. As it turned out, he found one or two things that he thought should be adjusted, and that was enough to keep us in Prickly Bay another day. Oh well.

Yesterday morning, with the rigging work behind us, I was confident that we’d be good to go. I completed my engine checks and all seemed well for us to raise anchor and leave. When we put the boat in gear though, we were presented with a very unwelcome surprise, a loud rumbling (grinding?) noise that obviously should not have been occurring. I immediately shut the engine down and as always, when faced with a problem that I have not experienced before, tried to think it through.

As the noise only occurred when the boat was put in gear, I first looked to the transmission. While I checked to make sure that there was sufficient oil in the gearbox (there was), Rebecca jumped in the water to make sure that there wasn’t anything on our prop (there wasn’t). With those two things checked off the troubleshooting list, I started to think of what else might affect the shaft turning and create that noise. There was nothing obvious, no loose fittings, or items rubbing that I could see. The shaft does run through that mysterious stuffing box though, so maybe it had something to do with that? 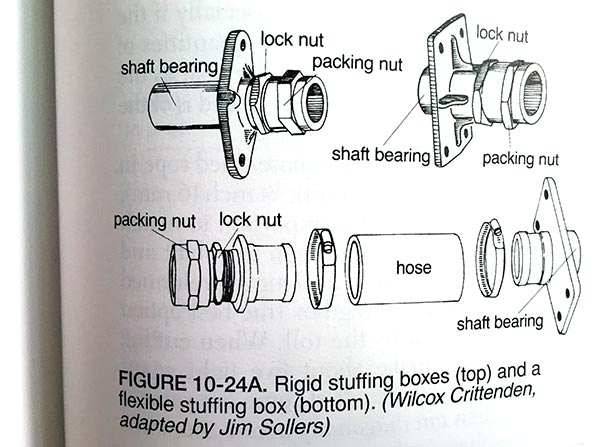 , and had some discussions with knowledgeable friends, I didn’t know anything about stuffing boxes, or packing glands. I do know a bit now though, at least in theory.

Our Amel’s stuffing box has a permanently mounted, external grease gun which, when the handle is turned, injects grease around the packing glands. When we were going through the boat with the previous owner, he told me to give that handle a turn every 10 hours or so. Figuring that more grease would be better than less grease, I was pretty sure I’d been doing that even more often than directed. Perhaps I hadn’t though? 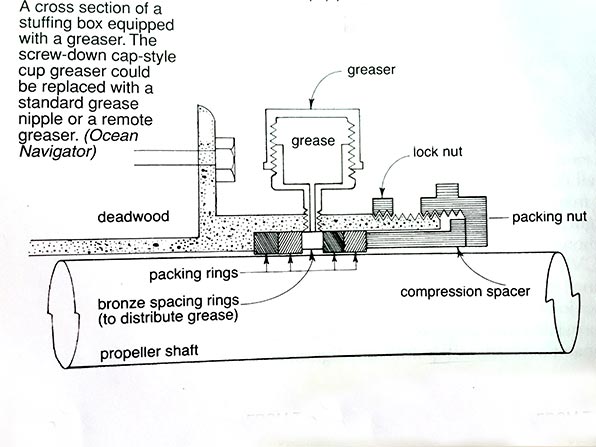 Looking for another solution to our noise, I cranked the handle on that grease gun to further lubricate the packing gland. As we put the boat in gear, the noise seemed to dissipate a bit. Note that we were still at anchor so the boat could only be put in gear for short periods of time, alternating between forward and reverse. Buoyed by that bit of positive results, we continued the process of adding more grease while putting the boat in gear. Ultimately the noise went away. I should point out that at the recommendation of our friend, I did open up the grease gun to make sure that there was actually some in it, and to be sure that it was working, I filled it to the top.

Was that really the problem though, a lack of grease? I’m not sure, and as there was no wind to sail the boat yesterday if we lost our engine, we weren’t interested in raising anchor to really test it out. I guess we’ll see.