I don’t want to do this at sea.

When it comes to diesel engine maintenance, I am a definite newbie. The small amount of info that I have learned has basically been acquired through trial and error. With my time on the Leopard, I had become somewhat familiar with the Yanmar engines that powered it, at least the user-serviceable bits. Frost has an older Perkins 4.154 engine, and I am working hard to develop some familiarity with it too.

In my layman’s words, the cooling system on a marine diesel engine basically works like this: raw (sea) water is brought into the engine room through a below-the-waterline seacock, and after flowing through a strainer, it is pumped into a heat exchanger where it absorbs the engine’s heat from the coolant, later to be discharged overboard.

The thing that moves the water in the pump is a small multi-vaned rubber impeller, a part which can, over time, degrade and break into pieces. If you allow the vanes to break off, they can flow from the pump into the heat exchanger’s core, clogging the small holes and degrading its performance. This is something to be avoided which is why, at least once a year, the impeller should be checked/changed.

Unfortunately, accessing the impeller is not always easy. On the Yanmar engines, the water pump was reasonably easy to get to. On our Perkins, it is decidedly less so. In fact, the only way to access the impeller is to completely remove the water pump from the engine, not something that I was looking forward to doing. Not knowing if/when the impeller had ever been checked though, it was a job that needed to be done, and as we had moved onto the dock yesterday to have some other work done, I figured there was no better opportunity to get on with it. 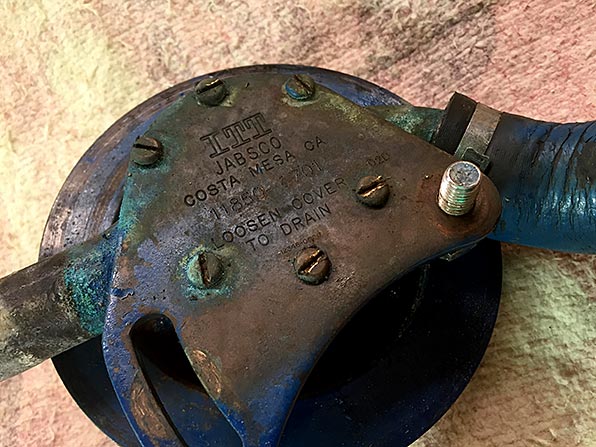 I’m not going to say that the job of removing the water pump was all that complicated. I did need to figure out the process as I was going along, and I was fortunate to be able to complete it all without dropping any nuts or washers into the black hole that is our engine bilge.

One unpleasant surprise came when I actually got the old impeller removed. The impeller that was in the pump was actually in pretty good shape but when I went to find a replacement from the 6 spares that I had on the boat, only one of them was the appropriate model (I found 6 spare impellers on the boat, 4 of the same type and 2 other misc. ones. I had assumed the 4 that were the same would fit the engine. I was wrong. Lesson: don’t assume!). 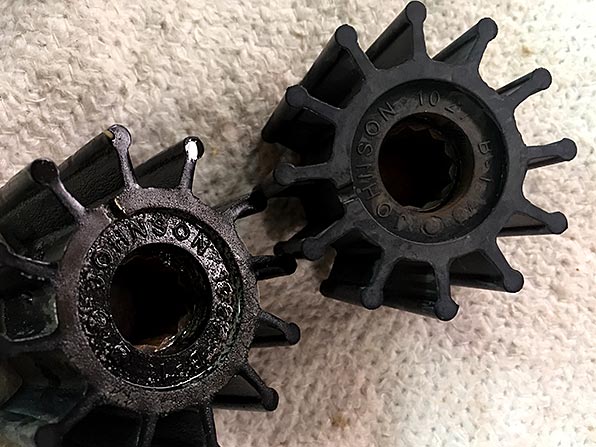 When I finally got the new impeller put in and the water pump reinstalled, all without dropping any pieces, I tested the engine and found that we had great water flow. Unfortunately, the pump was also leaking, forcing me to go through the entire process of removing it again. While something like this normally would have prompted a fair amount of expletives to leave my mouth, I calmly convinced myself that this was all good practice.

I’m pretty convinced that the leak was due to having the wrong gasket. Without anything better, I used some Permatex liquid gasket material to seal it. After installing it once again, that seemed to do the trick in preventing any leaks.

What did I learn from all this? I learned that I definitely do not want to have to do that job while out at sea in some less-than-calm weather! As with most bits of engine maintenance, taking preventative action is always the best.

Note: After finding out that I no longer had any spares, I went to Island Water World yesterday and bought four spare impellers of the appropriate type!

Perhaps our next boat will be…

As if struggling to find charts isn’t enough