How to avoid a new nickname

Let’s take a poll… have you ever put gasoline into a diesel tank or vice versa? It happens, a lot. I will confess that I have only made this error once and it was relatively painless as I only got so far as to pump a gallon or so of diesel into one of our gasoline jerry cans. Many others are not so lucky. A friend, who I will not “out” on this blog, recently shared that, for a time, he went by the nickname diesel (admittedly a pretty cool nickname as far as nicknames go), a handle which he earned for filling one of his company’s vehicles with that fuel instead of gasoline. When traveling, errors such as this are pretty easy to make, especially when visiting islands where the language spoken by fuel station attendants is not your native tongue.

We are super careful to make sure that when we fill up, it is gasoline that we’re getting and not diesel, even if it means repeating what we want 5 or 6 times. I don’t know what steps are necessary to fix an engine which has been run with the wrong fuel but I can imagine that it’s not a job I’d be too keen to tackle.

On a related subject, certain boats seem to be set up in a way to make a similar and perhaps even more damaging mistake easy to make. They do this by having the deck fill caps for the fuel tank and the water tank (and sometimes the waste tank) side by side. Fortunately, our boat is not like this at all, each of the three being quite removed from one another. We have, however, seen boats where all three caps are directly adjacent to one another! That, in my opinion, is a disaster waiting to happen.

to replace the standard stainless steel ones, obviously to help prevent such mistakes. Mistakes which we know do happen. Perhaps certain boat designers should have thought this out ahead of time? 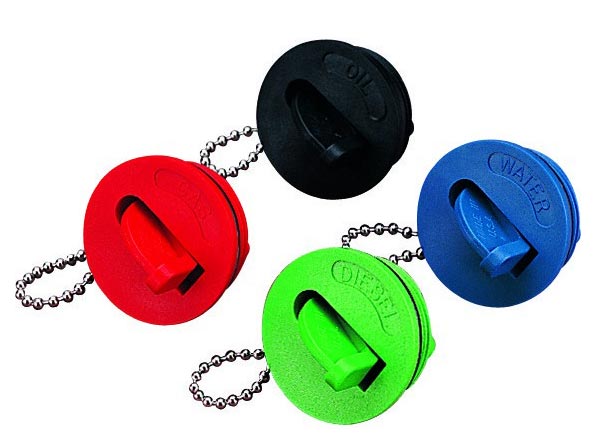