How to acquire super hearing… buy a boat.

Here is a funny anecdote that occurred at the beginning of our Trinidad-Grenada passage.

Just after leaving the Chaguaramus anchorage, Rebecca and I raised our mizzen sail and removed the “preventer” which we rig on the main boom to stop it from swinging back and forth when not underway. As we continued on, a couple of fast moving boats went by, leaving us with a bit of their wake to contend with. Shortly after they passed, I noticed a banging sound, which I initially attributed to their waves hitting the side of the boat.

I think that boaters develop a super sense of hearing!

When heading north from Trinidad, prior to heading out into the open ocean, vessels need to pass through one of the cuts between the islands known as the Bocas del Dragon (Dragon’s Mouth). The one closest to the mainland, Boca de Monos, is notable, not just because it is narrow but because there can be a strong current flowing, either aiding or hindering your progress. As we approached this channel, it was obvious that the current was with us. Not only was our speed increasing (8+knots), the waves were building too. 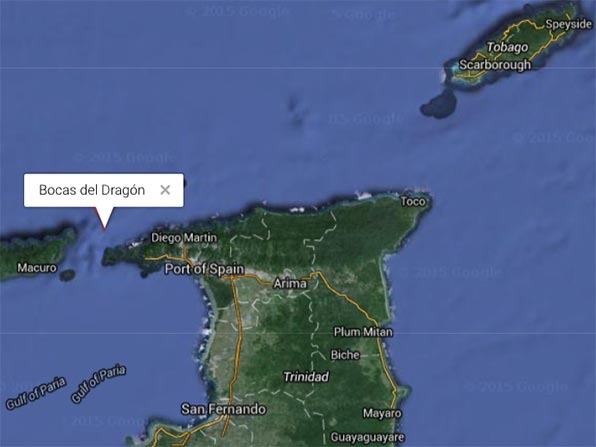 All this time, the banging sound that I noticed minutes before had not only continued, but was growing louder. The sound appeared to be originating below our feet so, as you might imagine, having just had work done on both our prop shaft and our rudder, we were frantically looking for the source of the banging. We looked in the engine room, searched in lockers, and checked all over the boat.

Just as we neared the narrowest point in the channel, Rebecca went down below once again to see if she could figure it out. When she went in through the companionway we were navigating with a bit of chop. When she returned the seas were like a full-on storm. We were pitching up and down, driving into huge, short-frequency waves, each one sending water over the bow!

With no obvious explanation for the noise, and the ugly conditions that we were experiencing, I was seriously considering making a 180 turn to head back to the calmer waters to try to figure it out. It was just prior to doing so that, when standing on deck, I noted that the boom, swinging back and forth, was in time with the noise that we were hearing. Yes, that was the source of the banging. Simply trimming in the main sheet which, at the time, was a tad loose made the noise go away completely. Doh! We’re so happy that we didn’t turn around because of something so stupid! 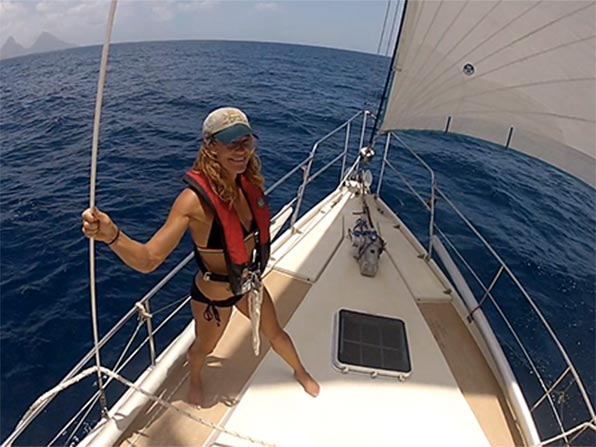 I found this on our GoPro yesterday. Can you tell where it was taken?

News on ZTC and a chance to go sailing

Keeping ahead of chafe