After leaving Big Sand Cay on schedule at 2:30 PM Saturday, we were disappointed, although not a bit surprised by this time, to find the wind pretty much blowing at us right on our course line. For some mysterious reason though, after getting free of the effect of the land, we were able to point almost exactly where we wanted to go. That shouldn’t be able to happen but we know how to take ‘yes‘ for an answer. The winds continued to blow 15-20 through much of the night making for a very fast passage. So fast that we actually needed to reef our sails to slow down so as to not make landfall at 3:00 AM. Rebecca and I are getting a bit more used to our 3 hours on, 3 hours off watches, amusing ourselves while the other sleeps by either reading or watching movies on the laptop. That made the time go by fairly fast. 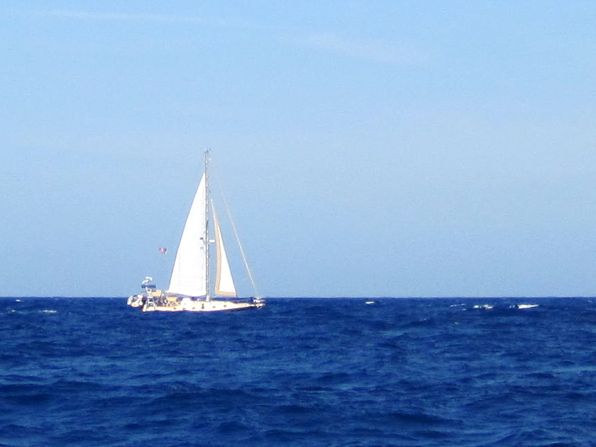 Passing our friends while on route to the DR. Sorry Tsamaya. 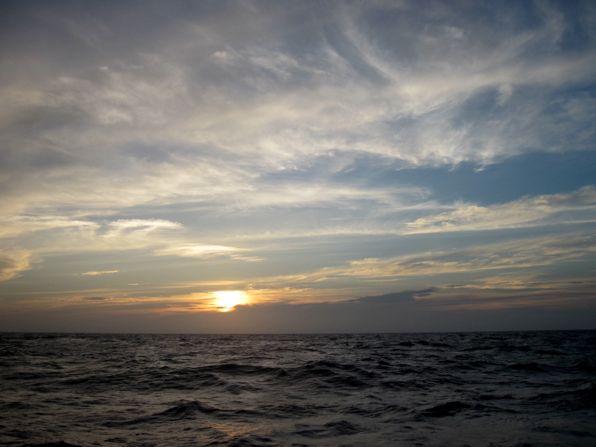 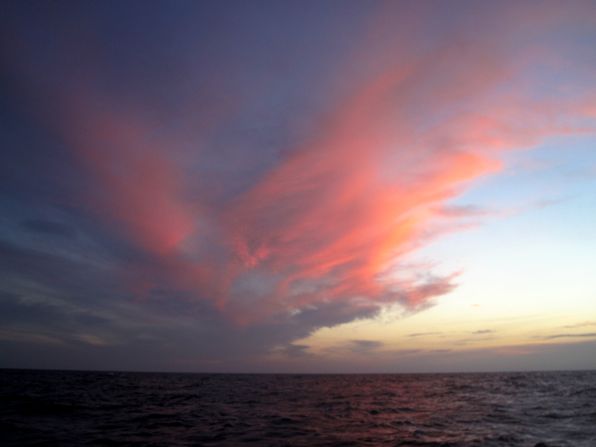 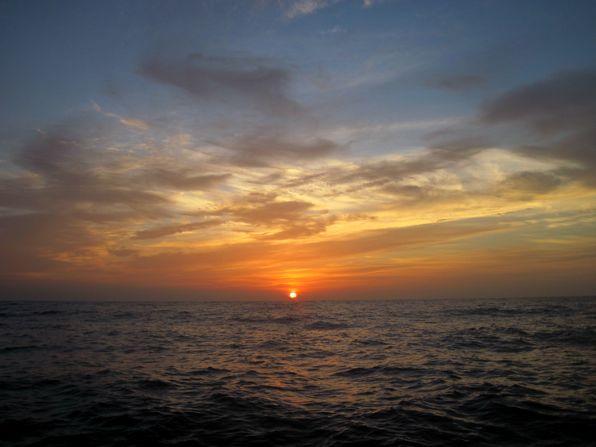 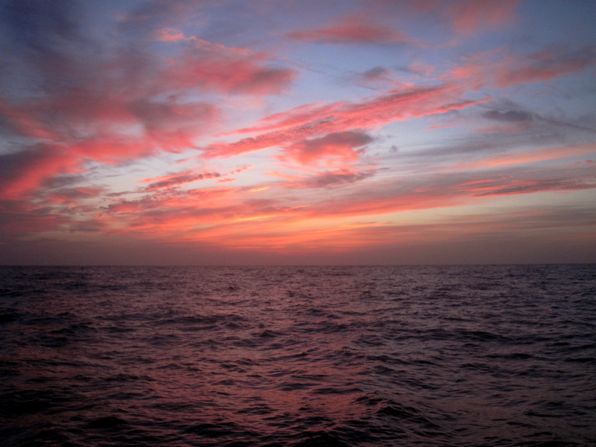 Not only were we welcomed to the coast of the DR by a beautiful sunrise, an awesome panorama and the rich smells of land, we were also escorted into the outer Luperon harbor at 7:15 AM by a pod of dolphins playing in our bow wake (sorry, no pics). That has to be a good omen! 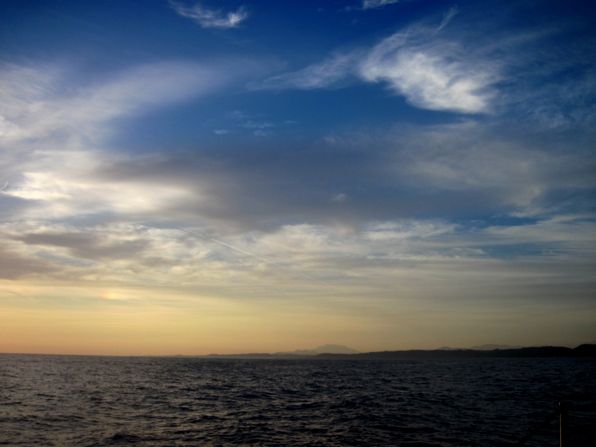 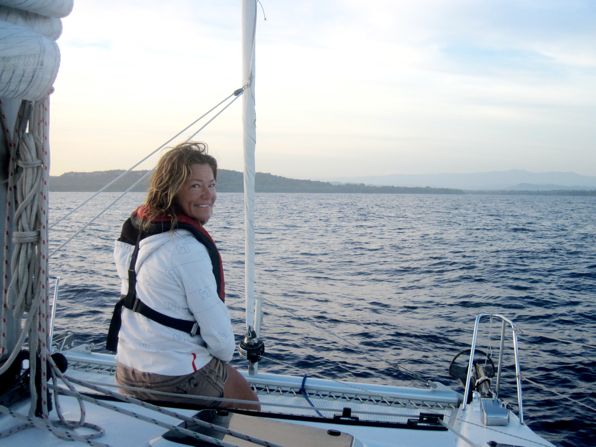 Rebecca, guiding us in. 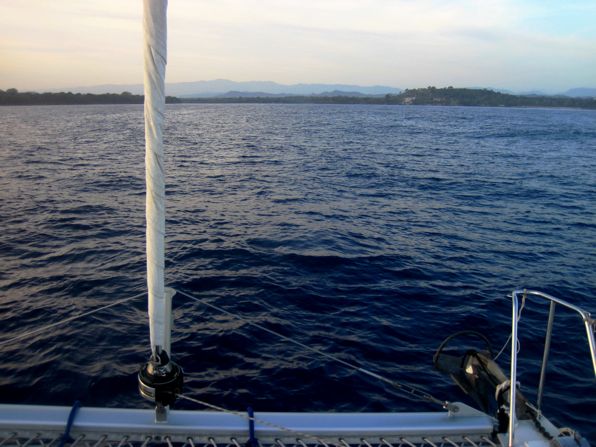 The mountains ahead in this pic form a natural “range” to follow through the shallows.

Entering the harbor was made easy by the various charts and guides that we had on hand. Again our Garmin chartplotter came through for us with a perfect course line to follow between the shallows. When we turned the corner into the harbor we saw an anchorage that rivals Georgetown in the number of boats present although unlike Georgetown, the water was almost dead calm. 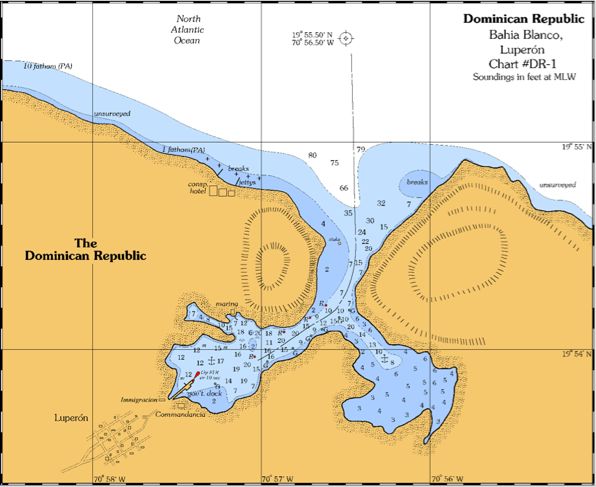 We made our way between all the boats down close to the end the harbor near the government dock, selecting a place to anchor. We were hook down at 8:00 AM but after being approached by Papo, who informed us that we could take one of his mooring balls for only $2.00 per day (yes, that is not a typo… $2.00), we pulled it back up and moved. The water here is very dirty and cleaning the anchor rode after a 2 week stay would not have been a pleasant job. I am happy to pay a few dollars to avoid that chore. Even bringing it up just then required multiple buckets of water to clean it (no, we don’t yet have a wash-down pump, Terry).

We have heard over and over how difficult and expensive it is to clear customs here in Luperon. Let us set the record straight. After squaring our boat away, Rebecca and I dressed in our nice ‘customs‘ attire and made our way into town. We could have waited on the boat but were were told that going into town might be easier, faster and cheaper for us. We first went to the immigration office, a blue trailer located pretty much at the end of the government dock. Rebecca waited outside while I went in and filled out two immigration cards. The immigration officer was friendly and my very rusty Spanish helped a little bit. We paid $43.00 to immigration and $10.00 each for 2-30 day stays. If we wish to stay longer we’ll need to get a visa. Total damage there was $63.00 (we were issued a receipt) and it was the same for everyone who checked in I believe. Total time: $20 minutes.

The next step was to have the Commandante visit our boat. He, along with another gentleman, had already been making their way from one of our friends’ boats to another so we were already dialed into the drill through VHF contact. Drinks were offered, papers were shown, information was recorded and then a fee was requested. We had heard that they were asking for $20.00 and most, if not all of our friends refused to pay anything. By this time, we were starting to feel a bit bad for these guys who were motoring around in the hot sun, the Commandante dressed in full military fatigues. We decided that if we were asked for money, we would give them $10.00 so I counted out that much and had it ready in my pocket. When it came time, the gentleman with the Commandante, who did all the talking, only asked us for 10 bucks anyway so it all worked out perfectly. By the way, we did not feel pressured at all. I am sure had we said no as our friends did that there would have been no issue!

This wasn’t the funny part of the whole experience though. As they were first trying to make their way to our boat to do their ‘inspection,’ their outboard motor kept quitting. They would get it started, move a bit closer and then it would stall, letting them drift back. After this had repeated itself over and over, I got in our dinghy and motored out to ‘rescue’ them, towing them into our boat. As it turns out, they had no fuel left. After all the formalities on our boat were completed and it was time for them to leave (the entire process took 10 minutes tops), I offered them a bit of gas. I gave the gentleman a full 1-gallon can, perfectly comfortable had he taken the entire amount. He instead only took a few drops and they were then on their way. Pretty much painless as far as we’re concerned. 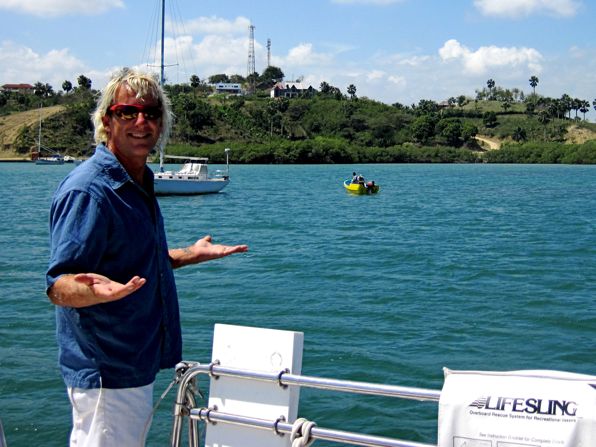 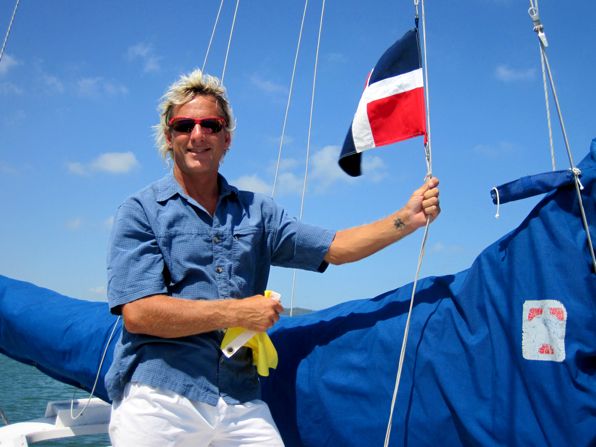 We are now legal in the DR.

Apparently there is one other 10 or 11 dollar fee that we might have to pay. I think it is a harbor permit. We’ll see what happens with that. We may just wait and see if they come find us for that one. We’ll just do the easy thing and play the dumb tourist.

Formalities completed, comfortable clothes back on, we made our way to the Puerto Blanco Marina where we had heard the Sunday action was. Right away we could see how this was a bit like Georgetown, in a Seinfeld Bizarro kind of way. It was apparently quite obvious to everyone there that we were new and after ordering ourselves a couple of 2 dollar giant beers, we struck up conversations with a variety of people. 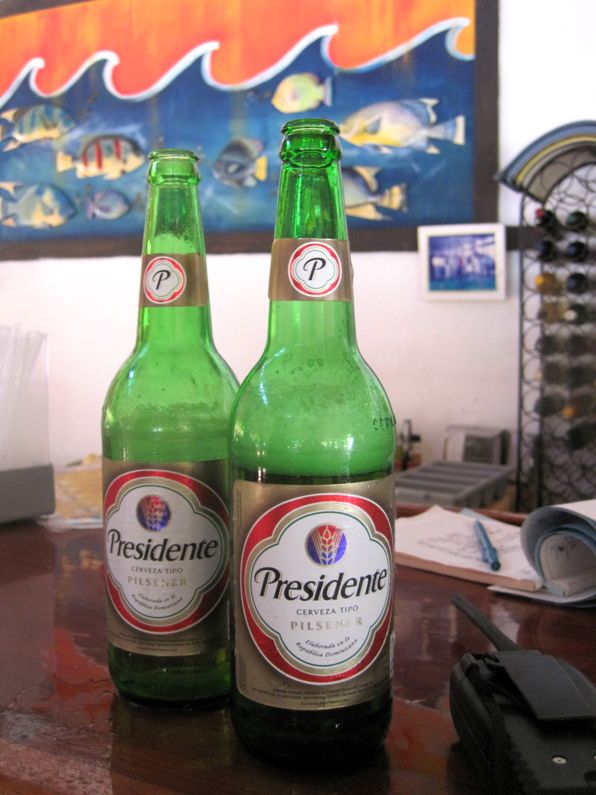 Giant, and inexpensive beers rock! We learned however that only the tourists drink Presidente. Most others, including us now, drink Bohemia. 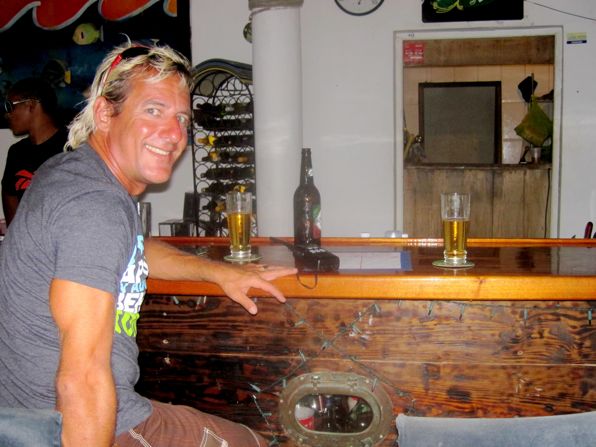 Without boring you with the details, we ended up at a cool little restaurant/bar with both the people who crossed to the DR with us, and our new Luperon friends. With a sufficient quantity of those giant beers consumed, we had no problem sleeping!

First impressions? We like this place and are very glad to we chose to check it out for ourselves as opposed to listening to the nay-sayers. We’re looking forward to doing some more exploring today. 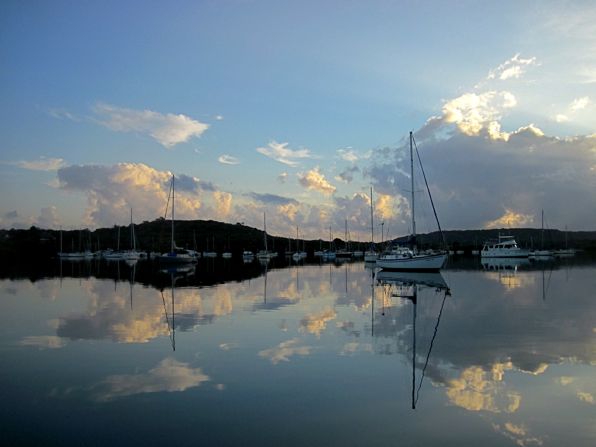 The calm waters in Luperon harbor this morning. We had a great night’s sleep.

The (Plan) ABCs of cruising

You shouldn’t work on a Sunday. Here’s why.