We are close to half way through our circumnavigation of Prince Edward County and are having an excellent time.

Day 1: We anchored in Prinyer’s Cove, a familiar anchorage for us on Adolphus Reach.
Day 2: We spent the night on a mooring ball in Picton after a great day of sailing.
Day 3: We short-tacked our way part way up Long Reach but the light winds forced us to “tap out” and motor sail. We ultimately made it to Big Cove (or something equally uncreative) where we anchored for the night.
Day 4: After a late start we made the short trip to the CFB Trenton Yacht Club where we spent the night on the dock. We did this primarily so that we were able to recharge our batteries.
Day 5: Today – Strong Wind Warning! We left the marina and headed for the Murray Canal with 20-25 knots of wind right on the nose (of course). The shallow depths of that water made for some uncomfortable motoring. Even in the canal the winds were pushing us around. Once we made it through the canal to Presqu’ile, we initially headed for the Government Dock. After docking in the high winds we found out that we would need to pay 1.25 per foot to spend the night there. Being the frugal sailors that we are we decided to anchor out in nearby Calf Pasture Cove (I love that name). We definitely prefer being at anchor as opposed to being on a dock, especially because it is FREE! With the high winds pushing us strongly into it, we had quite a bit of fun getting off the Government Dock. We needed to bust out some (untested) tricks, reversing with full power against our after spring line just to get our bow off the dock. It’s great when things like that actually work! 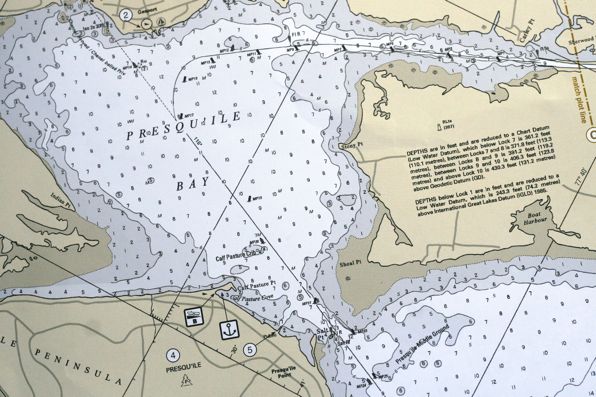 We are anchored in Calf pasture Bay, indicated by the
anchor symbol near the lower center of this image. 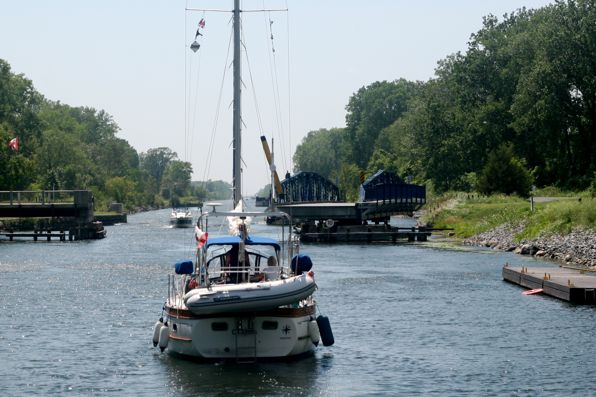 Here we’re following behind Pirate Jenny, heading west towards
the first of the swing bridges on the Murray Canal. 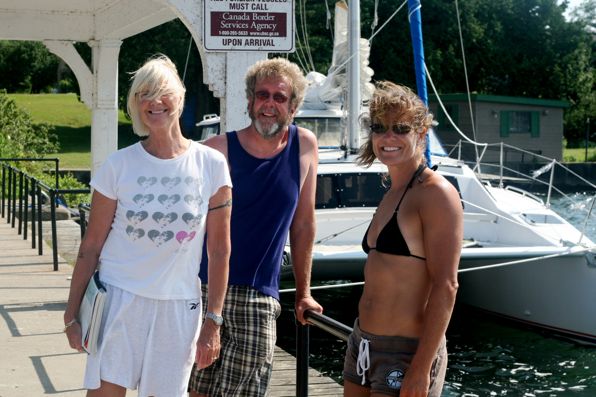 Rebecca, Terry and Anneke on the Government Dock in Presqu’ile. We decided that it was a bit too rough, and too expensive to spend the night there.
We headed out to anchor shortly after taking this pic.

If bad weather threatens, do we run or stand our ground?

Our island tour with Avalon