Guatemala to El Salvador – No room at the inn

After spending a couple of weeks in the mountains of Guatemala, oftentimes shivering even when wearing both our merino wool base layers and our down jackets, it seems almost overwhelming to be back at sea level, sweltering in the moist heat that surrounds it. The change was inevitable though when we made our 2000 meter descent from Iztapa, Guatemala to the coast in El Salvador. 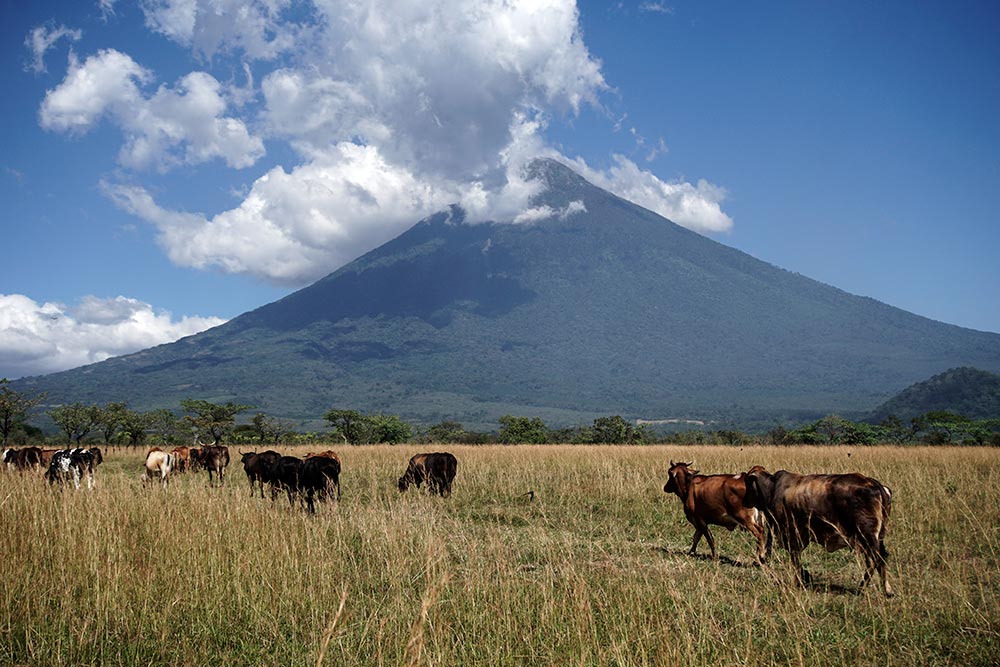 Saying goodbye to the volcanoes of Guatemala. 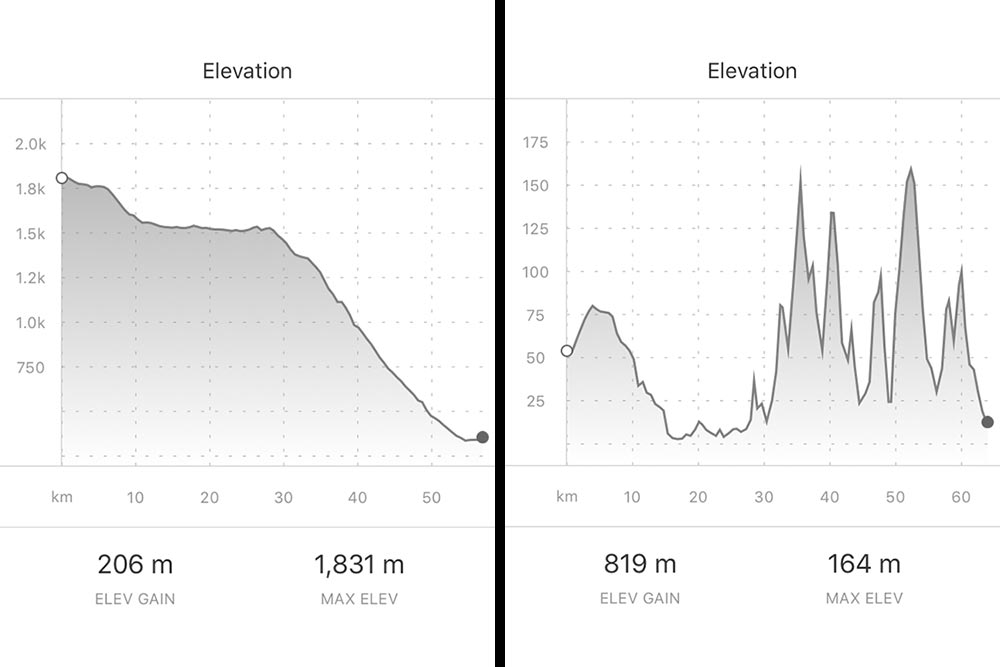 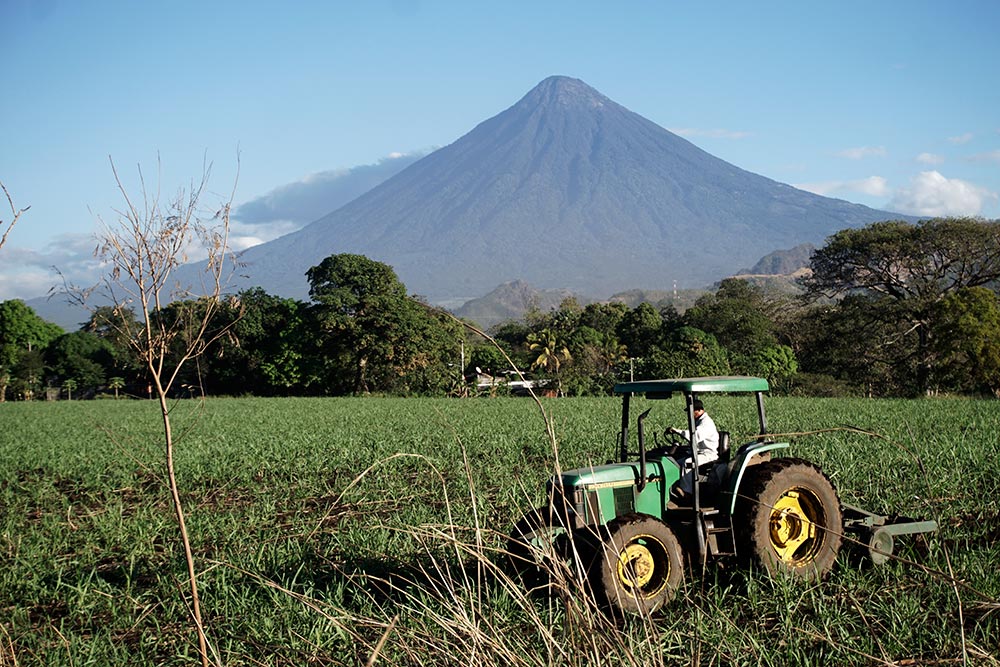 We were on the road early but the farmers were already hard at work.

Our original plan was to spend New Year’s Eve in Antigua, Guatemala, a popular tourist destination. Unfortunately, the city turned out to be just a bit too popular. Our ride to Antigua from San Andres Iztapa was pretty much entirely downhill and thus fast. We actually spent less time completing the ride than we did looking for a place to stay once we got there. Feeling far too much like Mary and Joseph in the biblical Christmas story, being turned away from hostels and hotels alike — “There’s no room at the inn!” — we (mostly me) finally gave up and opted for a new plan, riding on to El Salvador to spend New Year’s Eve there instead.

Our ride totaled 57 km that day and we made it as far as Escuintla. We had a couple more frustrating hotel-seeking experiences there but ultimately found a place to spend the night. The next day we continued downhill all the way to the border, another 108 km away. In fact, our hotel at the border town of Pedro de Alvarado was no more than 100 meters from the immigration office!

As long as you haven’t overstayed your visa limitations, the border crossing from Guatemala to El Salvador should be relatively uneventful, and it was for us. This is because the visa that we were issued after leaving Mexico allows us to stay 90 days (total) in Guatemala, Honduras, El Salvador, and Nicaragua. After waiting in line for only 15 minutes or so, our passports were stamped and we were issued a tiny piece of paper to give to the officials on the other side of the border. Even the currency exchange was painless as there were numerous folks, both men and women, exchanging money for those waiting in the immigration line. Although we didn’t have a lot left, we changed our remaining Guatemalan Quetzals to US Dollars, the currency used in El Salvador, at the better than normal rate of 8:1!

I was a little unsure about how the prices would change once we crossed the border but any fears I may have had about a large increase were alleviated at our first meal. We enjoyed a huge breakfast with coffee and juice for just over $2.00 each. Not bad. 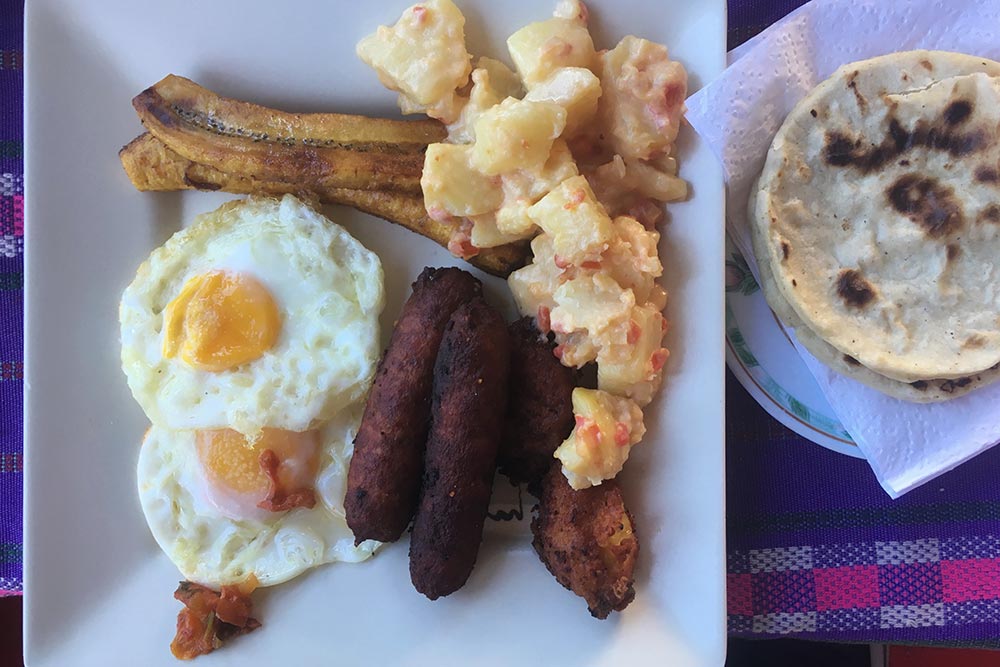 Coffee, juice and a ton of food for about 2 bucks US.

For the past couple of weeks, we have been paying attention to the recent political protests taking place in Honduras. We both read countless internet posts where people would say to avoid Honduras because of those problems, or simply because of normal day-to-day crime. An equal number of people said to avoid El Salvador too though. I wish I had a camera pointing to the roadside to capture the smiles and warm greetings we receive as we pedal along the roadways. I’d make a video montage of them, and maybe that would help to quell some of the largely-unwarranted fears that people carry with them. 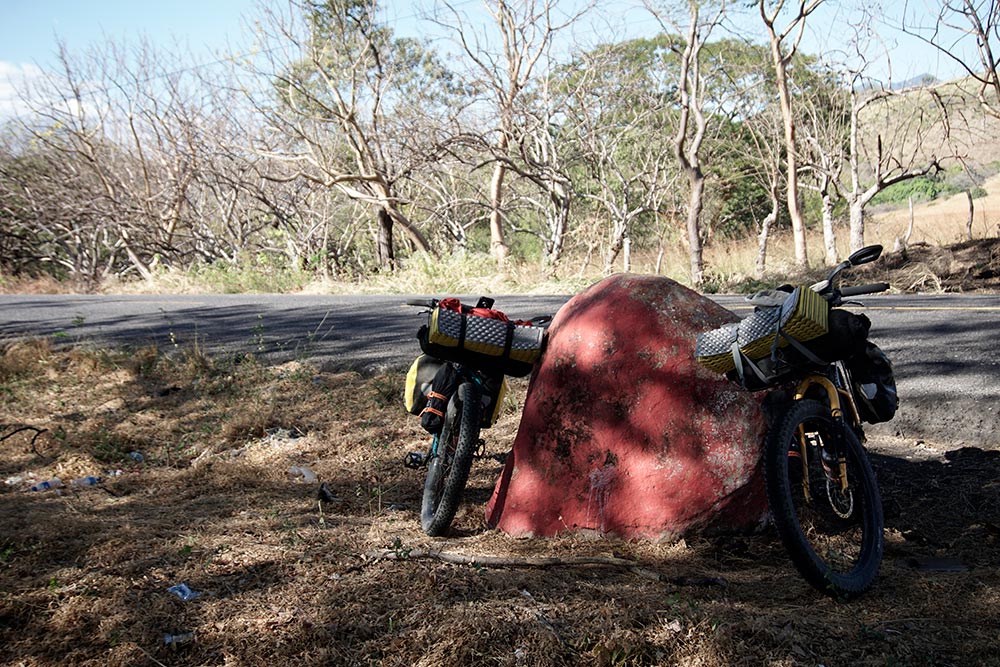 Can you guess why the rock is painted red?

On the ride out of Lake Atitlan in Guatemala we passed a German cyclist heading north who suggested that, if we were in the area, we should stop at the El Salvadoran town of Los Cóbanos. Looking at it on a map, the place seemed like it could be a good place to spend New Year’ Eve (it was on the beach!) so we made it our initial destination after crossing the border. As with Antigua though, our beachside New Year’s idea was shared by many and we found that the hotels in the area were either full or significantly overpriced. Not willing to overpay, we backtracked 9 km to an auto hotel that we noted on our ride to the coast and spent the night there. 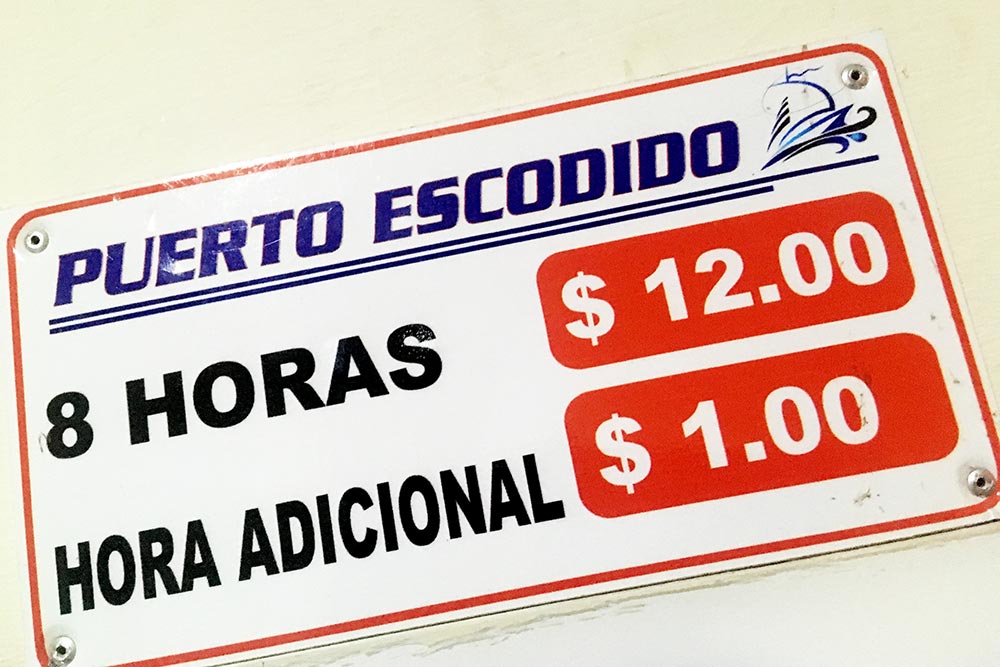 Have you ever stayed at a hotel priced like this? 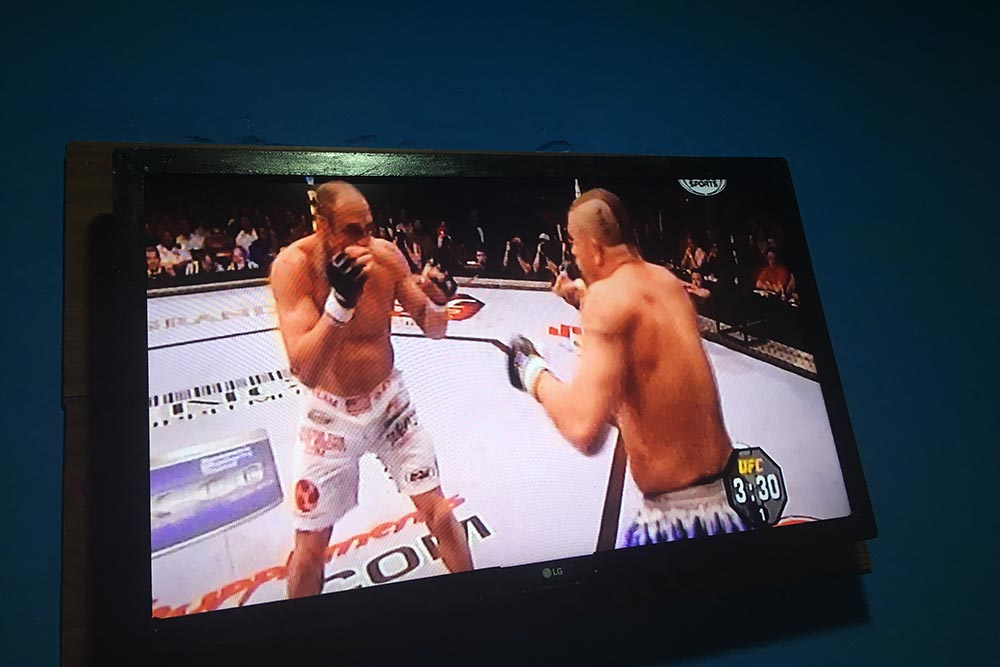 New Year’s Plan C was to ride to El Tunco, another coastal spot that came highly recommended. A cursory glance at the elevation profile showed the ride from Cóbanos to El Tunco to be largely flat. Oh, how those elevation profiles lie (see image near top of post)! It was anything but flat. Instead, the ride consisted of an endless procession of 50+ meter hills, much like an extremely large amusement park rollercoaster. And the ride was not amusing! To break up the climbs, we also had to contend with 5 long tunnels on the roadway. Normally I am not a fan of tunnels but seeing how these were reducing the number of climbs that we had to make, I was happy for their presence. 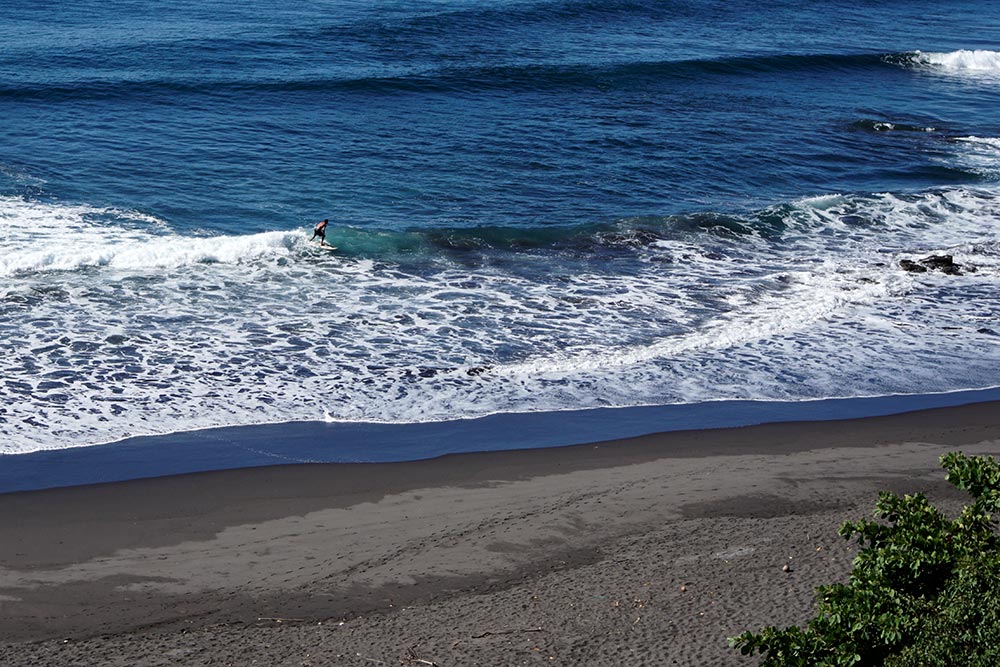 The first surfer that we spotted. The water looked so inviting! 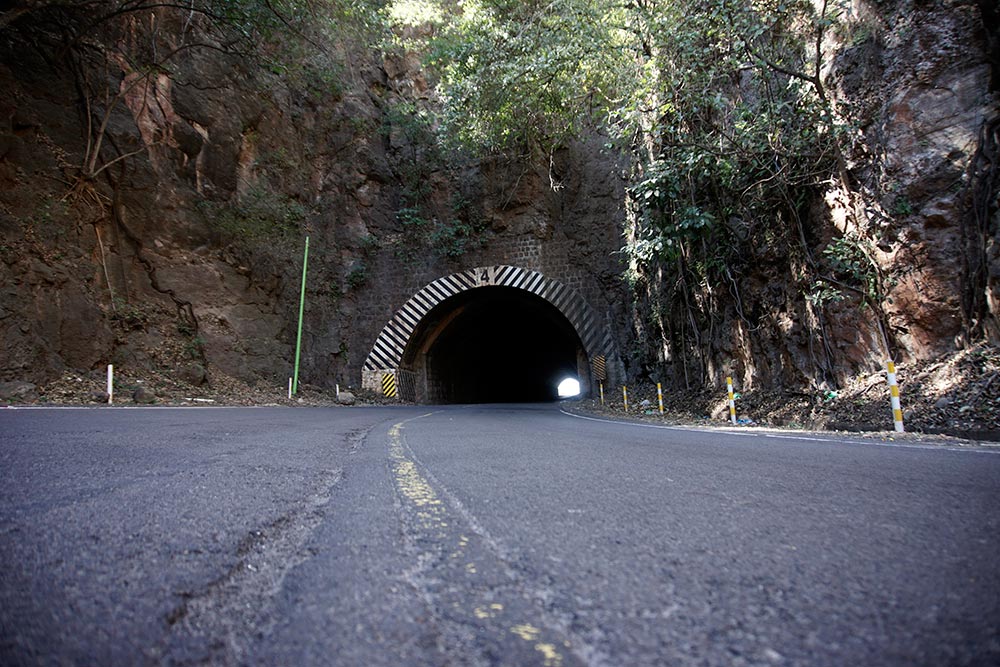 Tunnels… this time they were welcome.

Note: Back in the heat, we need to remember to, once again, carry a bunch of water. We were getting pretty dehydrated!

Rebecca often uses an iPhone app called iOverlander to research places to stay. In doing so, she noted a positive review from a place in El Zonte, a town just shy of El Tunco. We decided that, since it was on the way, we’d check there first before continuing further on. Starting to seem a bit like a broken record, we once again received the “there’s no room at the inn” message. While we were still deciding what to do, we were waved over by a young couple standing outside the gate of the adjacent hostel. While they too had no rooms available, they did offer us camping space which was all that we needed. 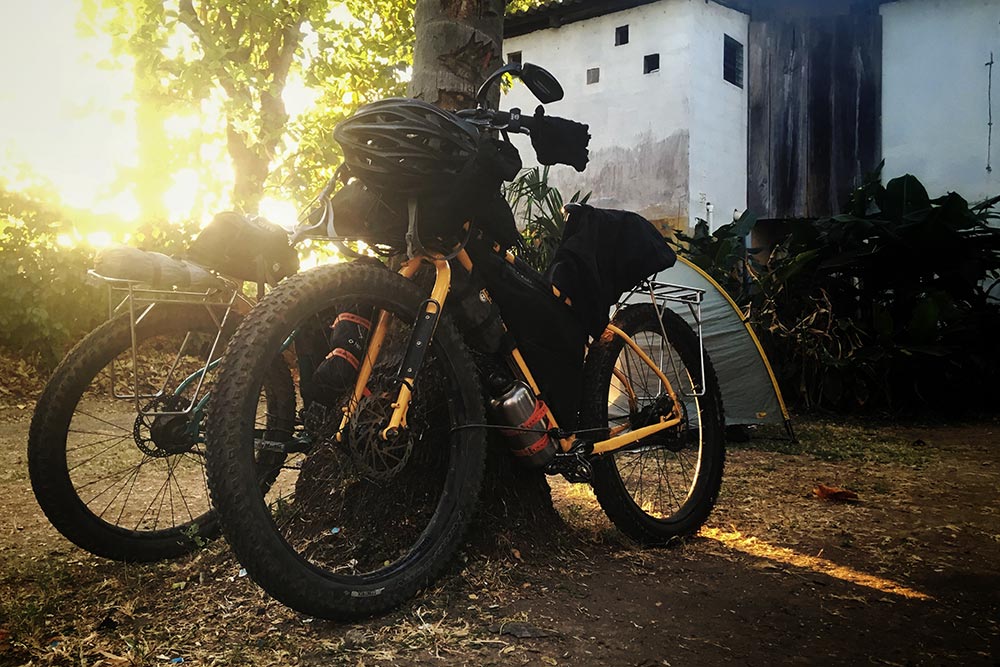 Our camping spot on the hostel property. 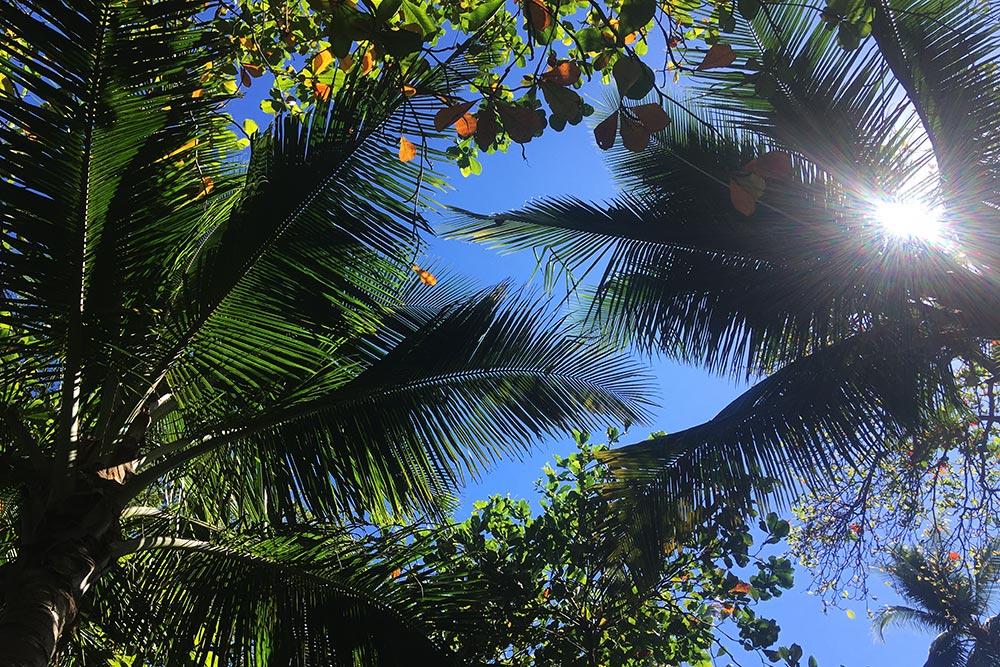 The view from my hammock. Not bad, eh? 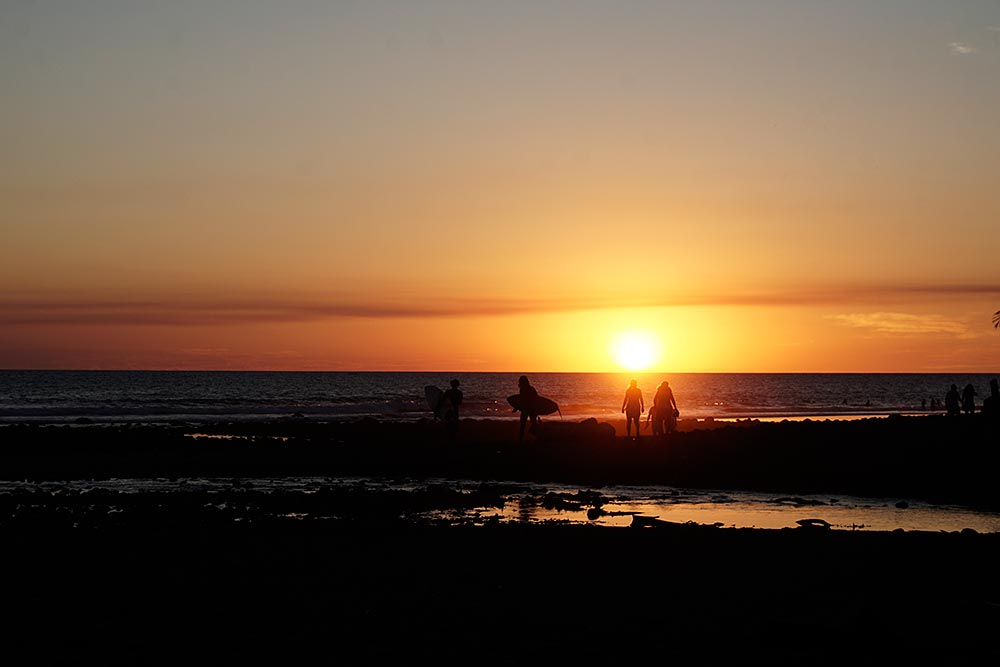 As it turned out, the Canegue Hostel, run by Juan and Beatrice, was just what we needed. It was cheap, unpretentious, very chilled out, and full of happy people. 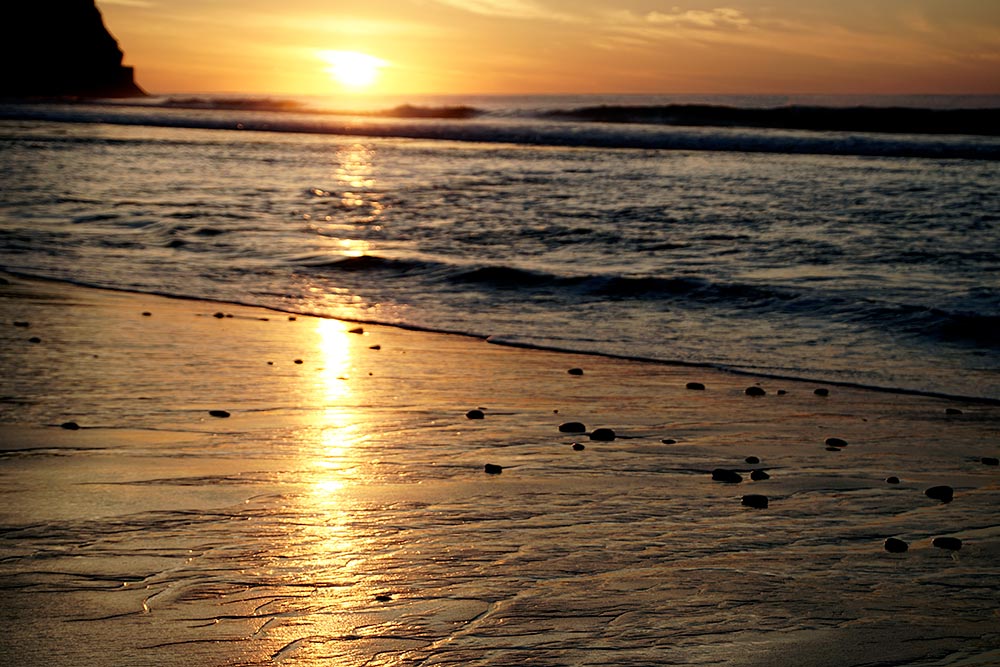 Watching the sunrise from the beach. 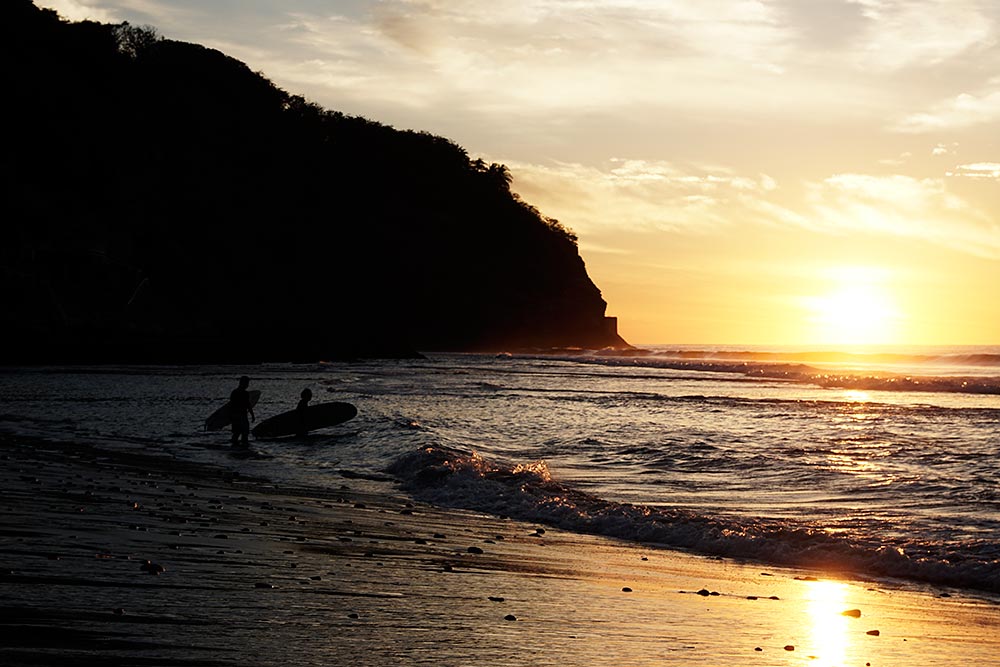 The surfers get after it early! 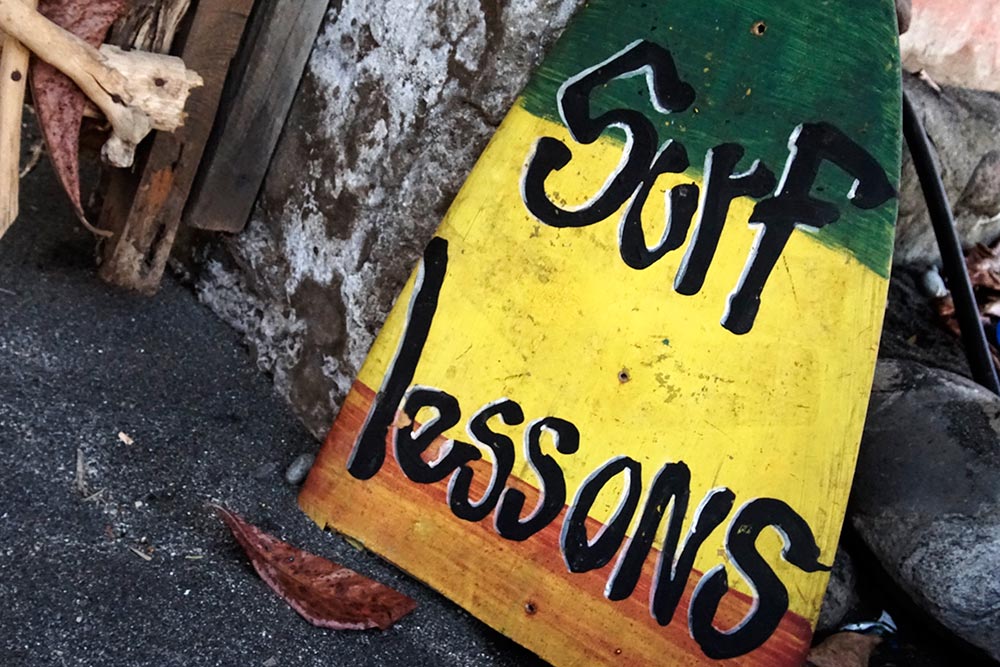 Shortly after we arrived at our hostel, we took note that Juan offered private surfing lessons. As Rebecca has always wanted to try it, we arranged for her to have her first surfing lesson on the last day of the year. She rocked it, of course! 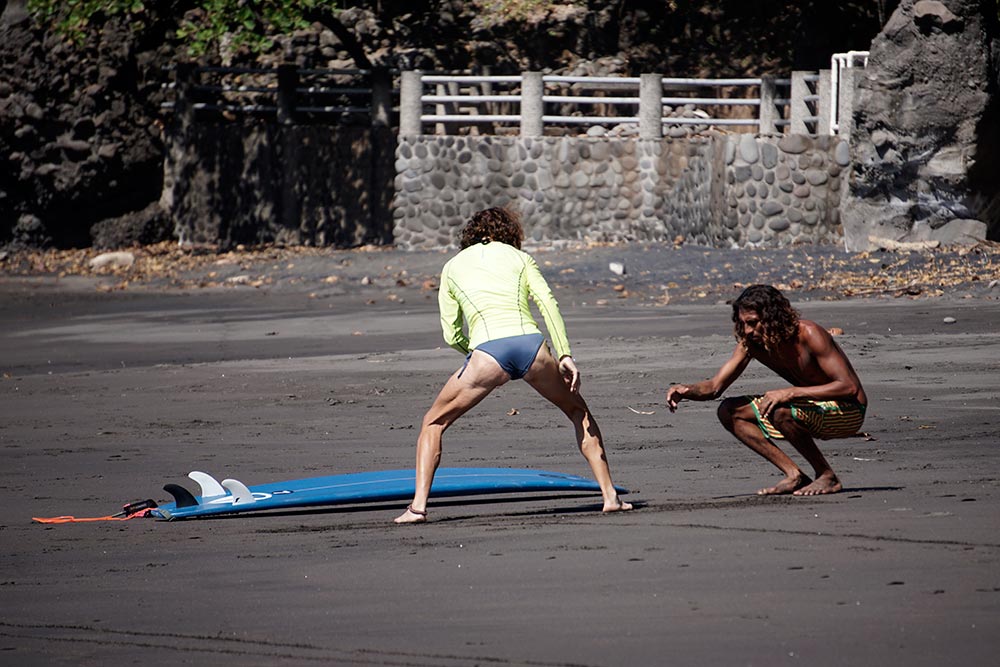 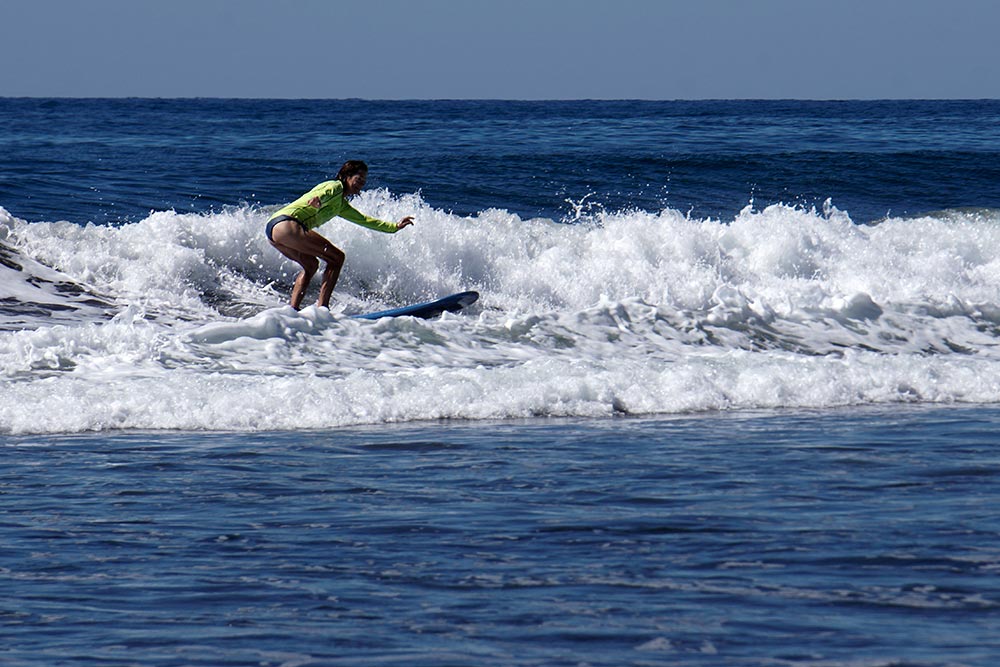 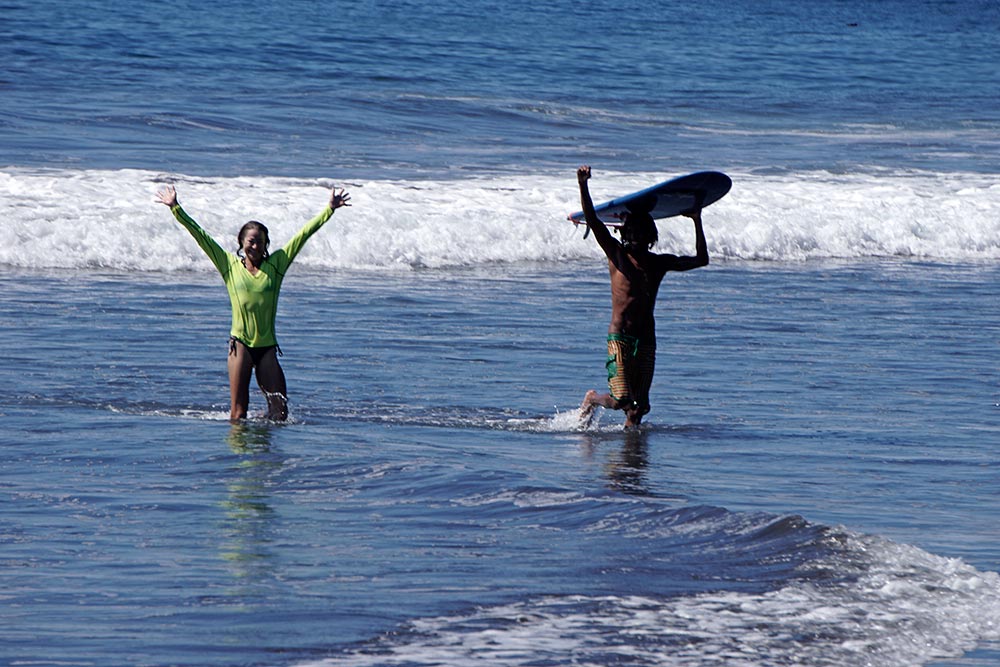 Of course, she rocked her first lesson!

Check out this mini-documentary about Juan, Rebecca’s surfing instructor. You can see a bit of the El Zonte area that we stayed in too.

The end-of-year festivities in El Zonte were just as cool. One of the hostel guests, a friend of Juan’s from San Salvador, had a bunch of groceries with him when he came to visit so we (actually I didn’t do anything) prepared a feast for the lot of us. After that, we shared stories and drinks until near midnight when we all left the hostel to join the rest of the town at a bonfire on the beach. Sound cool? It was. Thanks for the great New Year’s experience, El Salvador! 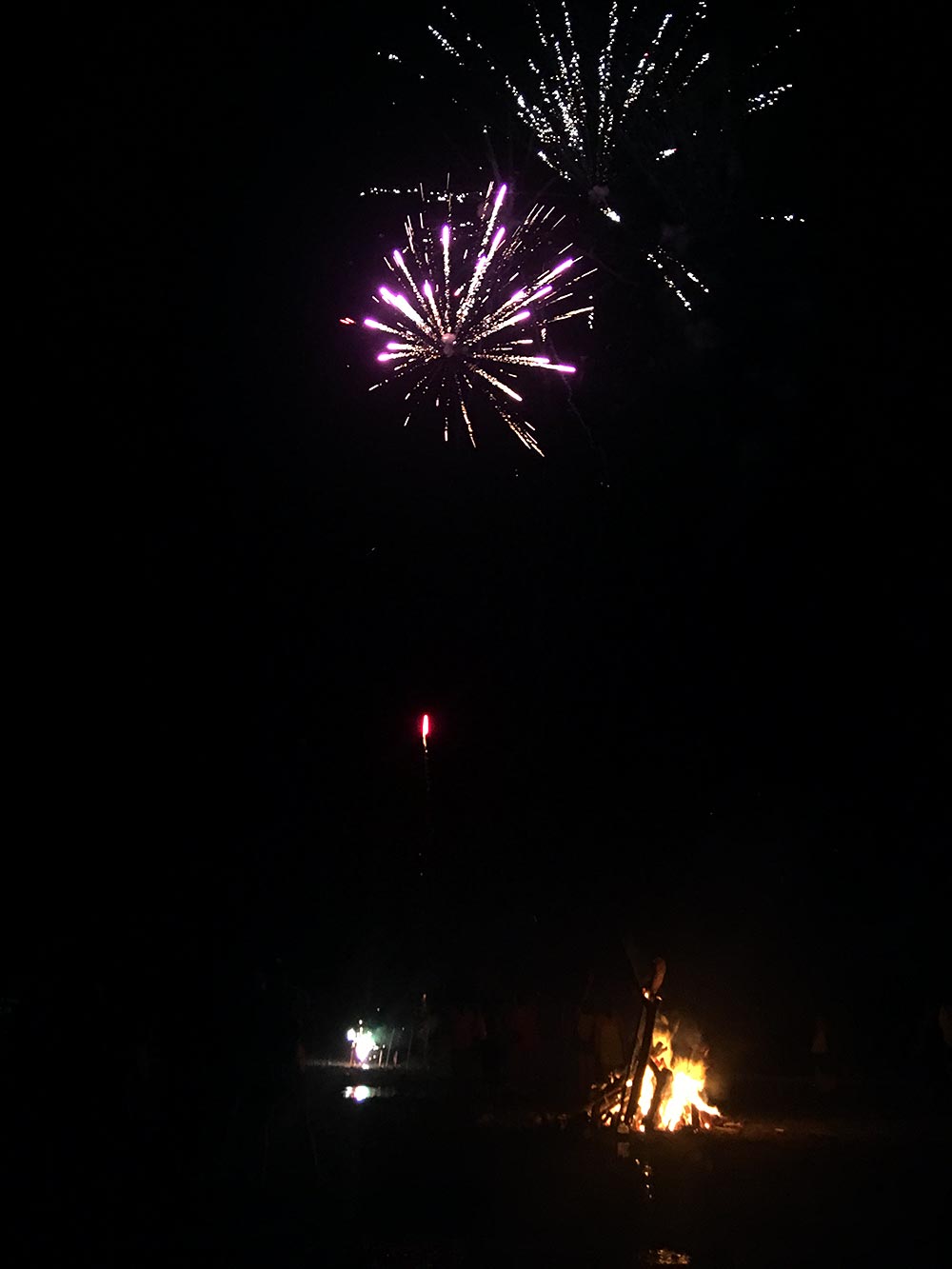 New Year’s Eve on the beach with a bonfire and fireworks… whats not to love about that?

El Salvador to Honduras to Nicaragua: Putting in miles

River rafting: the only boating trip I’m interested in today