cameras with them. Yes, for people who are involved with adventure-esque activities, of which Grenadian Hashing may fall into that category, the GoPro cameras seem to be pretty mainstream. When I heard about how last night’s trail was going to involve a river, waterfalls and jumping into chest-deep water, I was eager to bring ours along. Unfortunately, even though I thought that I had charged the battery, I did not. 🙁 No doubt others were able to record the cool trail though.

The GoPro cameras have proven to be excellent for taking dramatic action shots and HD video in good light. One area they fell down in was the taking of good underwater shots, in spite of the waterproof housing. GoPro has since created a remedy for this though: their new Dive Housing

. We purchased one of these and put it to the test for the first time during our visit to the statue park. About 70% of the shots I posted from there were taken with the GoPro with that new Dive Housing. The remainder were taken with our new Canon PowerShot D20

. If you have a GoPro and want to use it for underwater shots, get the new Dive Housing. You won’t regret it. 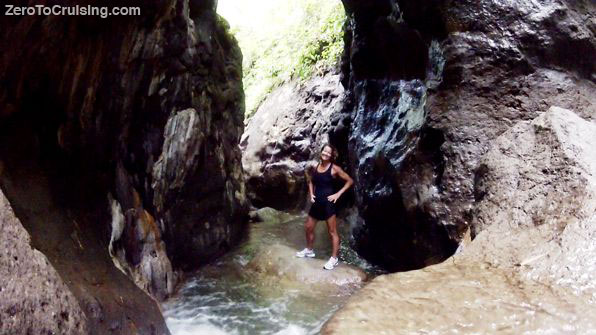 A screen capture from the few seconds of video I was able to record
on the GoPro last night (without the Dive Housing).

The big jobs are done

You should be able to change your own battery!