We’ve been in Dominica for a couple of days now and we’re working at getting the lay of the land. Our present anchorage is in Prince Rupert Bay by the city of Portsmouth, at the northern end of the large island. The bay is quite substantial and has plenty of options for anchoring. We were able to secure a spot just off the scenic beach by the Purple Turtle restaurant, close enough to shore that it’s unlikely we’ll have anyone come and drop their hook in front of us. The holding must be good here because it has been gusting to around 30 knots for most of the night and we haven’t budged! 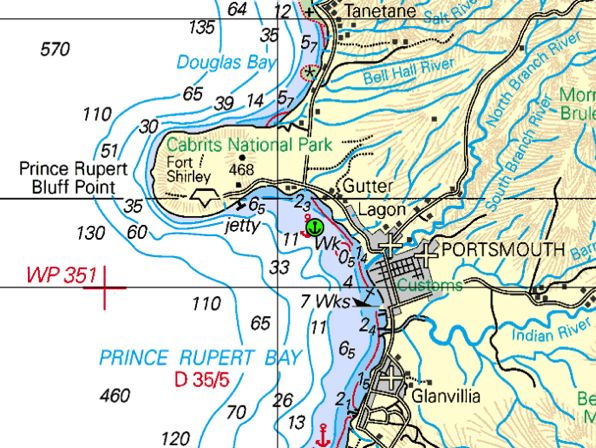 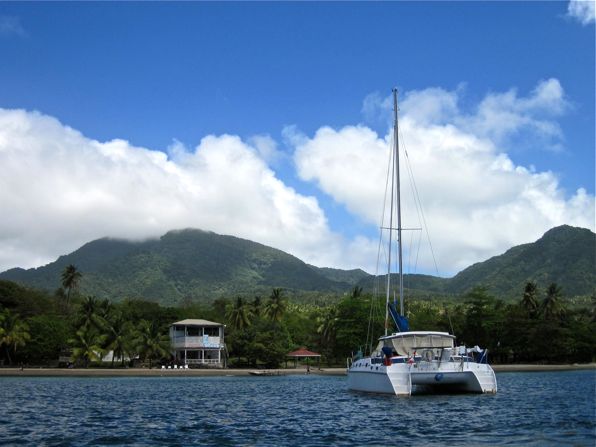 We have a great anchor spot right in front of the Purple Turtle.

Cruisers who come to Dominica are typically forewarned that they will be approached by boat boys immediately upon arrival. This is not an exaggeration and in fact, we had one come alongside us to “welcome us to the island” just as we were preparing to take our sails down. For the record, boat boys are not boys, they are typically full grown men who offer various services to the visiting yachties to make a living. It is recommended that, if possible, you come prepared with the name of a boat boy that you would like to deal with and we followed that advice, all set with the name of one of the guys that our buddies had used. The only problem is that we have come to learn that this particular guy is serving some time in jail. Oops! Oh well, the gentleman who approached us first, Martin, who goes by the name Providence, is highly recommended in Pavlidis‘ guide book, and we get a good vibe from him. He is very low key and friendly and has given us some good info on where various things are located.

Our first order of business after arriving here, as it always is when visiting a new island, is clearing customs. Because we arrived on a Friday, we were quite eager to get this looked after as in certain places, you will incur overtime charges if you attempt to clear in on a weekend. As it turns out, we were a bit too prompt and we arrived at the large commercial dock by the customs office when everyone was at lunch. No worries… we just dropped in to the little rum shop beside the dock and sampled one of the local beers. By the time we had finished our first Dominican beer, the customs officers had returned and we were able to get on with the formalities. The procedure was painless and it only cost us $10.00 EC (about $4.00 US) to clear in. The only hiccup that we experienced, and it’s one that we often come across, is that they wanted to know how long we planned on staying here. Of course, like most cruisers, we have no idea. We told the gentleman we spoke to that we’d be here 1 month. If we leave early, no problem and I suspect it won’t be any issue if we want to stay longer either. 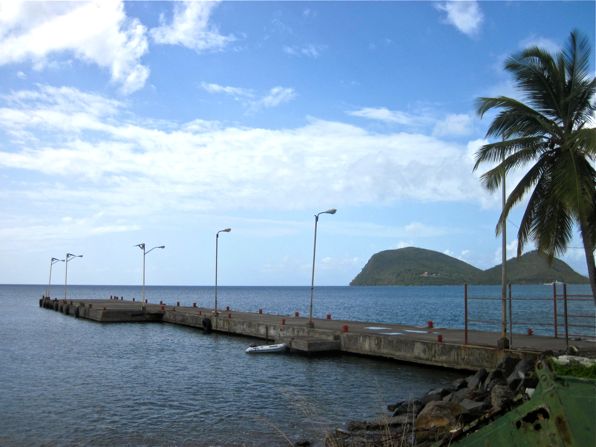 The custom’s dock was a bit of a dinghy ride away from where we’re anchored. It’s situations like this where having a fast dinghy is really nice. I sure wouldn’t have wanted to row all that way! 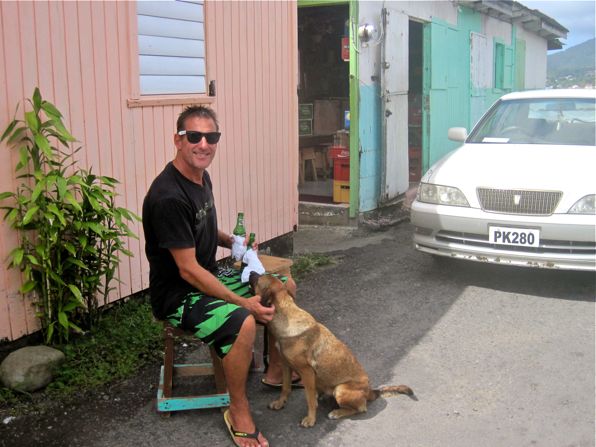 We make friends everywhere we go, even if they aren’t always human.

Now that we were all legal, we payed a visit to one of our friends from Grenada, Susie who sails on a beautiful boat named Spirited Lady. She invited us aboard her boat and offered us our second beer of the day, and while we enjoyed it, she shared with us some additional intel on the island. We discussed possibly heading out to shore with her that evening as Fridays are a bit of a party night here but after returning to our boat and cooking dinner, we decided to lay low for our first night. In case you were wondering, these guys seem to party HARD on Fridays! The music was going until dawn. We’ll need to check that out next week for sure.

Saturdays are also big in Portsmouth as it’s market day and since we were in need of some produce, we made that our first stop. Dominica is a very agricultural island and there was plenty of locally-grown produce to choose from. After purchasing a decent supply of fruits and veggies, we opted to make a trip to the large IGA supermarket across town to pick up a few more items. That, as it turns out, was a mistake. We think they should rename IGA here to $$$ and it was, in almost every case, extremely pricey. In fact, the only thing that wasn’t expensive was ground beef. Go figure. 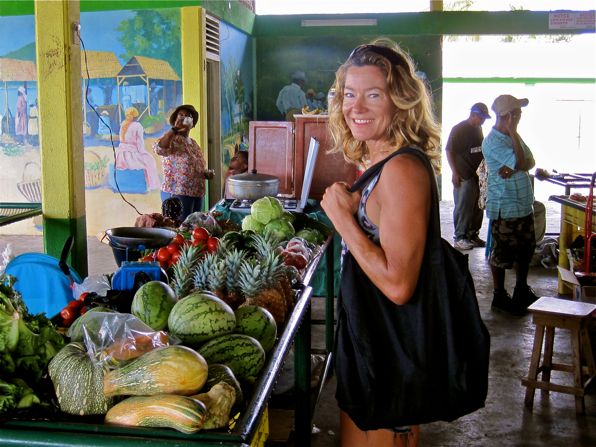 There was plenty of produce to choose from and the prices seemed to be quite reasonable. 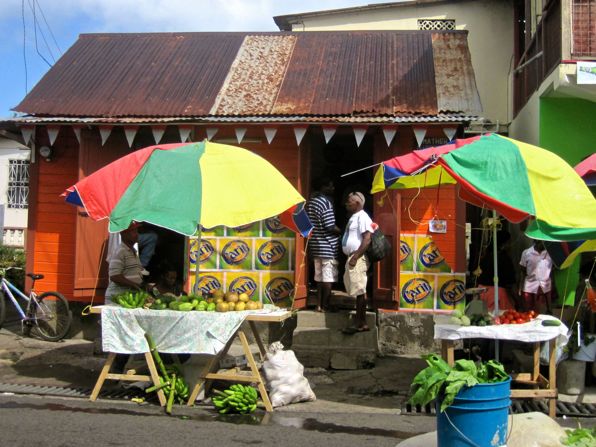 The market had venders all up and down the street. 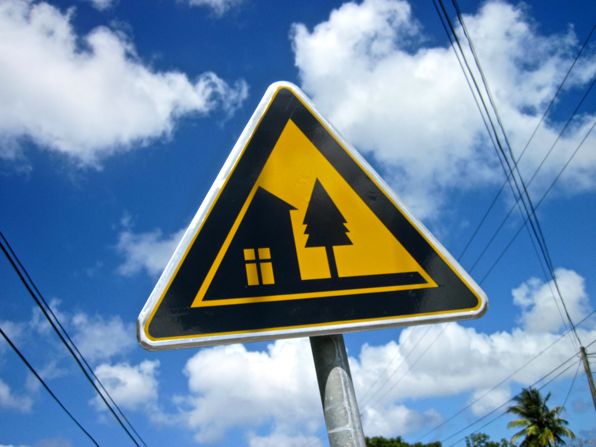 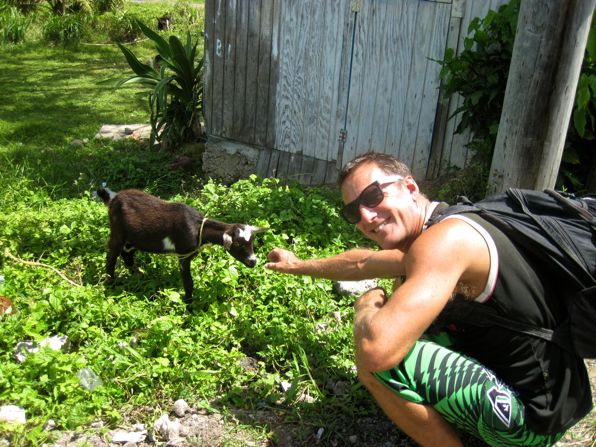 We spent the remainder of our first full day in Dominica going for a bit of a walk. Martin had told us about a nearby trail to Douglas Bay and we set off on foot to find it. Foolishly we walked 20 feet past the trailhead and instead of following the well-groomed and well-marked trail, we ended up bushwhacking right through the brush all the way to the other bay. We knew we weren’t on the right track but couldn’t figure out where we had gone wrong. It was only after we made it to the other side and found the actual trail did we figure out our mistake. Oh well, once again we got to explore “the road less travelled,” even if it wasn’t on purpose this time. 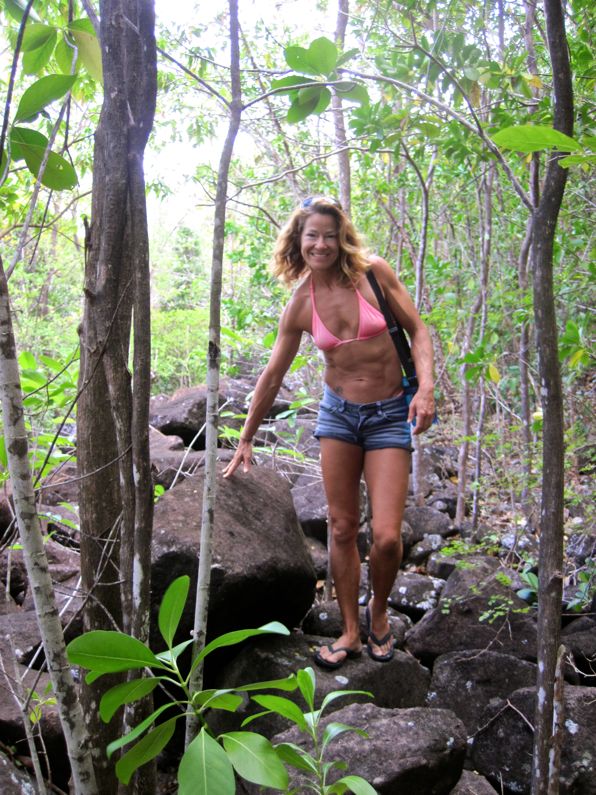 This is NOT the trail! Note also that flip-flops were not appropriate footwear for this terrain. 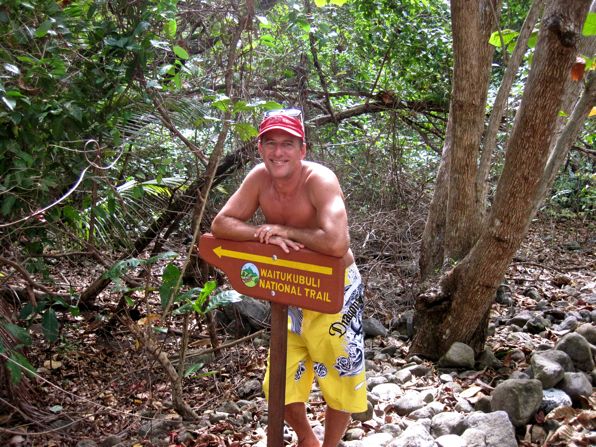 THIS is the trail, on the way back! 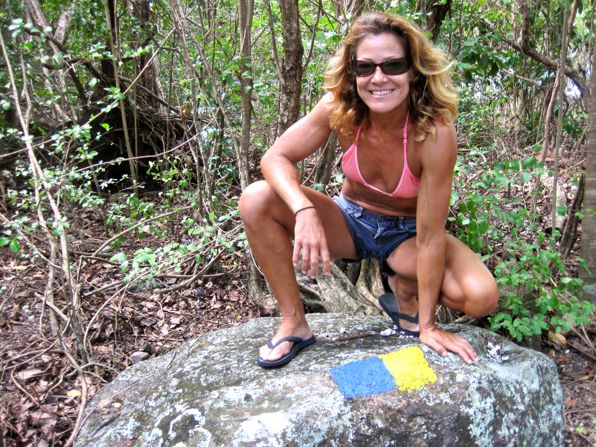 Notice how well it is marked. The “other trail” had no such markings, or even a trail for that matter! 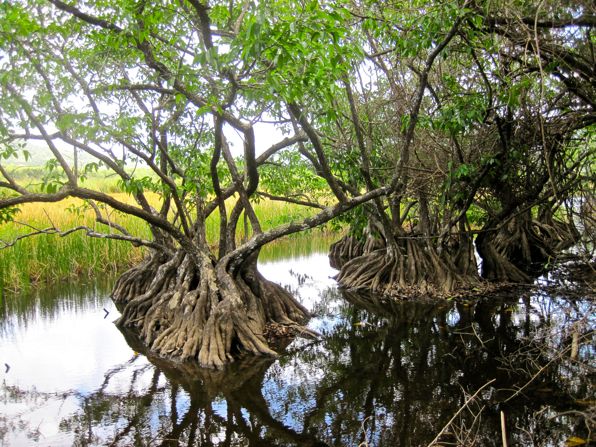 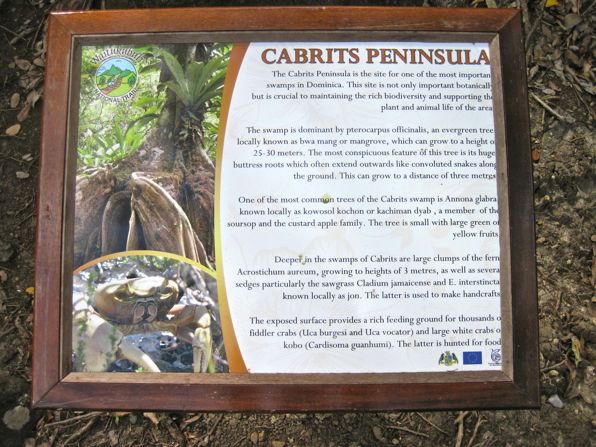 Cabrit is Spanish for Goat. 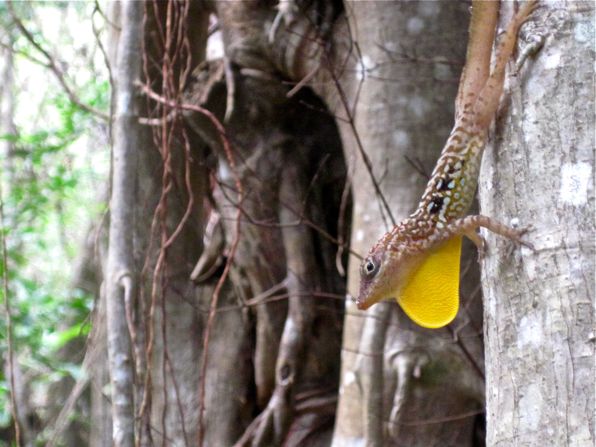 I was taking a photo of this lizard when he expanded his throat. I had yet to see that. 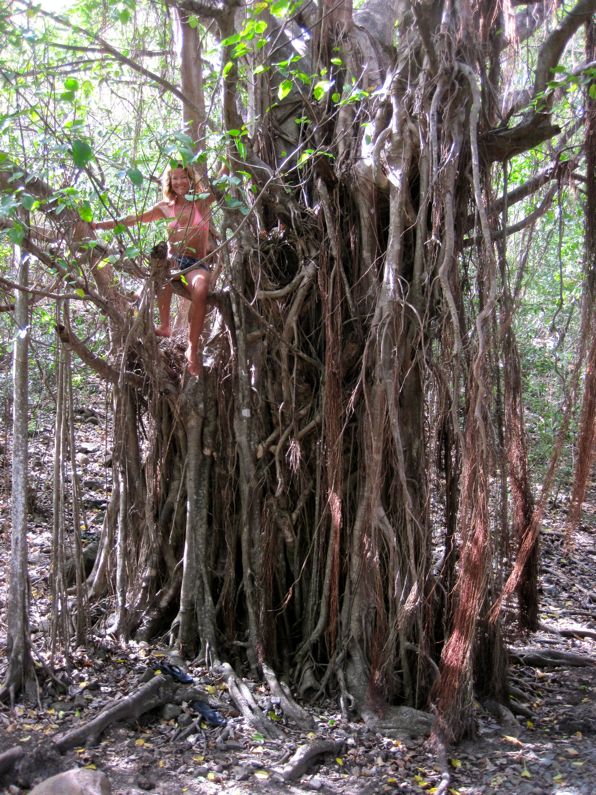 As seen on TV

We don’t want to have to do this too often!