Getting connected in Antigua

When we first checked into the United States after leaving Canada, the customs agent that we spoke to was most concerned that we didn’t have a telephone. Of course we did have telephones, back in Canada that is, but they would have been prohibitively expensive to use outside the country so we ditched them. That caused the officer a lot of stress. How could we possibly not have a phone?

As we came to learn, having a phone in the US was pretty much going to be a necessity due to the numerous times we would be required to call the Homeland Security people to check in as we moved from port to port, so as such, we picked up a pay-as-you-go TracFone. And this worked pretty well for the most part while we were in the US. We found that it also functioned in the USVI and in Puerto Rico. Outside the American territories though, it was useless. And so, we lived without a phone, all the way to Grenada.

We had been advised by our friends to pick up an inexpensive (inexpensive in case it got lost in the drink), unlocked phone that we could add local SIM (Subscriber Identity Module — I’m not that smart… I had to look up what SIM stood for) cards to. And we intended to, but just never got around to it. On the rare occasions that we needed to call someone, we just used Skype. Shortly before we were to leave Grenada though, our good friend and fellow-hasher George gave us a Nokia telephone. It had belonged to his young daughter but since she had recently upgraded, it wasn’t needed. Yes, we get hand-me-downs from kids now. 🙂 Anyway, this free phone has served us well, and in islands where we plan to stay for some time, such as Antigua, we can purchase an inexpensive local SIM card with a bit of prepaid time so that it’ll work. Because it’s not unlocked, we do need to deal with Digicel, but that has proven to be fine up to this point. Isn’t technology wonderful? 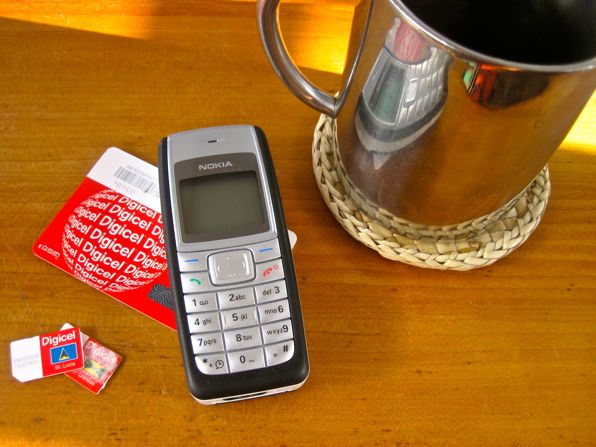 On a more nautical note, here is a quick video of us sailing to windward between St. Martin, which you can see in the distance, and St. Barths. It was not a good time to be suntanning on the trampoline!

Calm winds brought to you by the letter E!

How to never run out of gasoline again

We’re NOT on a cruise ship