Another item in the preventative maintenance category that we recently completed is fresh-water flushing our Yamaha outboard. Believe it or not, both the engine’s manual and the video below recommend flushing the outboard after every use in salt water. Obviously that is not going to occur. I do think that flushing it every so often should still help to keep the cooling system clear.

When flushing ZTC’s 9.9 HP Yamaha we used clamp-on muffs that attach to a garden hose and fit over the cooling water intake on the engine’s lower unit. After ensuring that the water is flowing, the engine is started and run for a while. If it’s working properly, you’ll see the tell tail “pee stream” exiting just under the engine. If you don’t see that, I suspect you’d better stop the engine quickly and figure out what’s wrong!

To flush our new 40 HP 4-stroke I initially thought that I’d have to use the same method, and even went so far as to purchase a cheap set of muffs for the job. I later learned that there is a built in flushing connector just under the engine which is designed to screw directly onto a garden hose. Note that when using this method the engine is not turned on! The water is just left to flow through the cooling system on its own.

As it’s recommended to leave the hose on for 10-15 minutes, completing this procedure uses a fair amount of water. While perhaps not all that much of an issue if you’re hooked up to a dock supply, it’s pretty significant when you’re taking the water from your vessel’s tanks. Good thing we have a hi-cap watermaker! 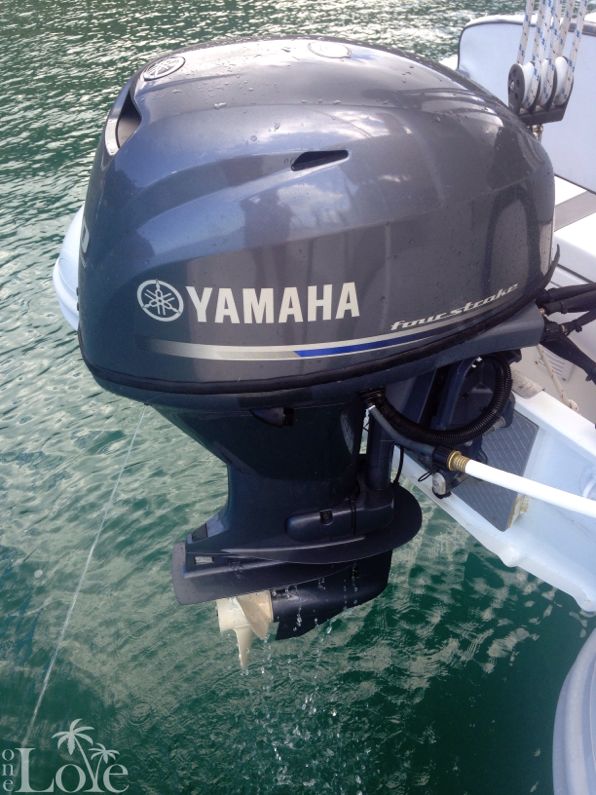 You can see the white garden hose attached to the engine, and the water flowing out of the engine.

Where do cruisers go on vacation?

This part does what?