After removing a mountain of stuff from our boat, it is sitting at least a good four inches higher in the water. We actually had to shuffle some of the remaining stuff around, moving anchors and spare rode to the stern as the bow was low and the transoms were sitting out of the water. I had visions of the bow-heavy boat slipping off the crane when it gets hauled next Friday!

To prep for having the mast removed on Tuesday, we have removed all of the sails, boom and all of the sheets, reefing lines and traveller. The only lines remaining on the boat are the four halyards. Our plan is to remove those as well and store them indoors, once the mast has been lowered. This will involve securing the halyards to “tracer” lines so that we can feed them back through the mast next year. This is just one more thing that we’ll have to figure out “on the job” I guess.

To assist with putting everything back together properly 6 months from now, we have been taking multiple photos (75 thus far) of each piece of disassembly. Let’s hope it helps. 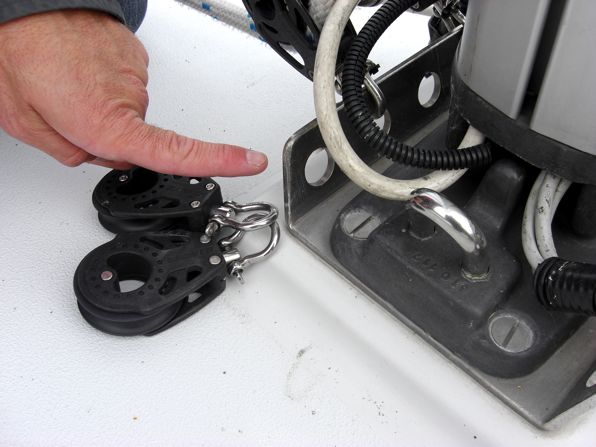 The blocks for the two reefing lines.
Notice the clever use of the finger to show where to put them next year. 🙂