Everything happens for a reason?

Some people like to believe that all things happen for a reason. I’m not entirely sure about that but I will admit that having that belief might help us to feel better about all that went on yesterday. It all started while Rebecca and I were enjoying our morning coffee. Our intention was to catch the 8:15 AM bridge opening to take our boat inside the Simpson Bay Lagoon. It was only when I was about to get up to change the VHF radio station to pick up the 7:30 AM radio net that I noticed that the time on my computer did not correspond to the clock which Rebecca and I had been referring to. The clock’s battery was obviously on its last legs, causing it to run slow. It was not 7:30 AM as we had thought but was instead actually 8:15 AM right then!

When I looked outside and saw a couple of boats circling, waiting for the bridge to open, I briefly debated having us try to raise anchor quickly and go for it. With memories of our last bridge issue here still way to fresh in my mind, I quickly dismissed that thought and decided that we should relax and wait for the mid-afternoon opening to move the boat. After all, we’re not in any hurry, right?

A few hours later, after blog posts had been written and workouts completed, I proposed the idea that we not enter the lagoon at all yesterday. Instead, we could motor the couple of miles around the corner to anchor at Grand Case, a place which our logbook indicates we anchored for one night before but yet I have no recollection of. Rebecca, who says she does remember the bay, was all for the idea so we got the boat squared away and proceeded to raise anchor. We had only just started to make our way through the anchorage though when our starboard engine stalled. Stalled and could not be restarted. Groan! While we could have easily made it the short distance to Grand Case on one engine, I did not feel it was prudent to leave a safe anchorage without the boat operating 100%. So, what did we do? We turned around, motored back to the same spot and anchored again.

After some engine troubleshooting, service manual consultations and internet searches, I am of the mind that the engine’s impeller is screwed and needs to be replaced. This is reportedly not an easy job and is one which I have never completed before. Yes, seriously, I have never changed it! The job will involve disconnecting the throttle/shifter cables and electrical wires, pulling the engine out of the well and somehow removing the lower unit, a task which itself has been reported to be tough. I do have impellers on board, and a service kit for the water pump which is also located in the lower unit. I just need to gain access to it.

So, why did I begin this post with the stuff about things happening for a reason?

Final note: Please, please, please… someone come here and start a company to provide Wi-Fi access. For all the services that St. Martin has here, their internet connectivity is in the stone ages! 🙁 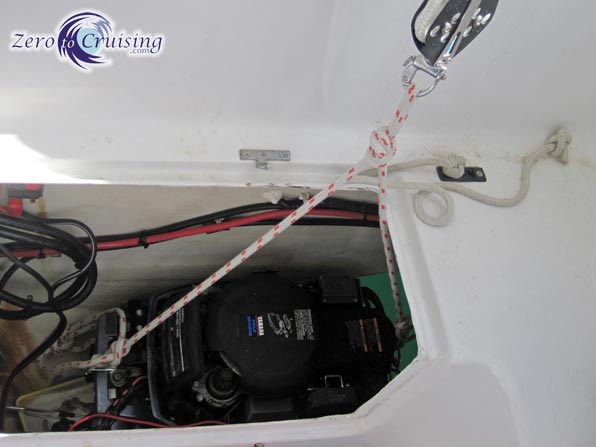 Getting the engine out of the well is no easy task.
This shot is from the last time that we had to do it.

Get off the boat and go for a walk.