Easy to sail, not so easy to anchor

The British Virgin Islands are quite interesting as far as cruising grounds go. The islands are so close together that one can be in a new harbor, on a different island, in only a few hours. The downside to many of these harbors though, is that anchoring can be challenging. In the short time that we’ve been here, we’ve had to contend with bays that are completely filled with mooring balls, bottoms with bad holding, bays where the wind backs and has the boats swinging around wildly, and others where the shore drops away from very shallow to extremely deep in too short an interval.

For example, a week or so ago we spent the night at The Bight on Normans Island. This popular bay is packed with mooring balls. It was actually the inspiration for this post. We’re usually pretty good at being able to quickly find a spot in an anchorage but it took even us a bit of motoring around to scope out the depths and distances to be able to find a decent place. As it was, we ended up with the shoreline quite close on our starboard side and three large cats on balls surrounding us. We did not spend a second night there.

In Great Harbor on Peter island we found a beautiful anchorage. It reminded both us, and our friend Mike on Gilana who we ended up anchoring near, of Chacachacare Island in Trinidad, a spot that we loved. The challenge with that bay is that, with the exception of the shoreline, it is very deep. In fact, the guidebook Cruising Guide to the Virgin Islands

even says that much of it is too deep to make a worthwhile anchorage. An additional challenge is that the local fishermen lay nets along the beach each day and you are prohibited from anchoring where they do so. The problem is, that is one of the only places that is less than 30 feet deep. With the fishermen’s approval, we managed to anchor just aft of their nets. That was perfect for us until, late one afternoon, the wind backed and had us almost swinging over top of their fish trap. If we hadn’t immediately raised anchor, we would have done just that. 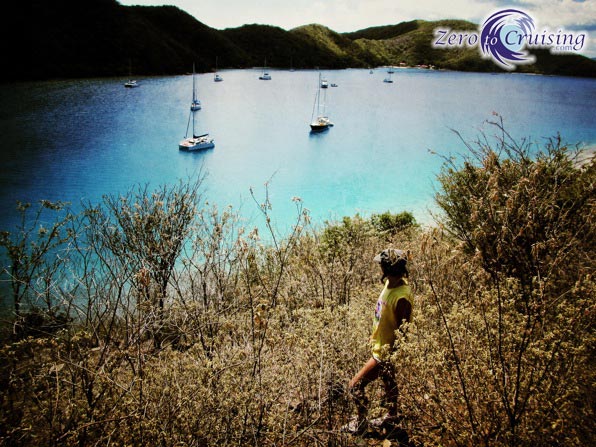 Where did we head after leaving Great Harbor? From there we motored around to the other side of Peter Island to Benures Bay on Normans Island, a spot that our friends Kirk and Donna had already staked out. This is another beautiful bay but not without its own set of challenges. Here the wind flows over top of the hillsides, swirling around to make the boats dance randomly at anchor. For the newer readers, when boats all swing the same way, if they are anchored with adequate room, they don’t swing into one another. When they swing in random directions, even if they are anchored properly, they can still end up playing bumper boats. One way around this, and what Kirk and Donna, and Rebecca and I ended up doing, it to set our anchor and then tie a stern line to a tree on shore to fix our position. This is a considerably more complicated process than the normal anchoring scenario and not something that you’d frequently see most newbies attempting. We typically don’t like to do it ourselves but there are times where it’s necessary. 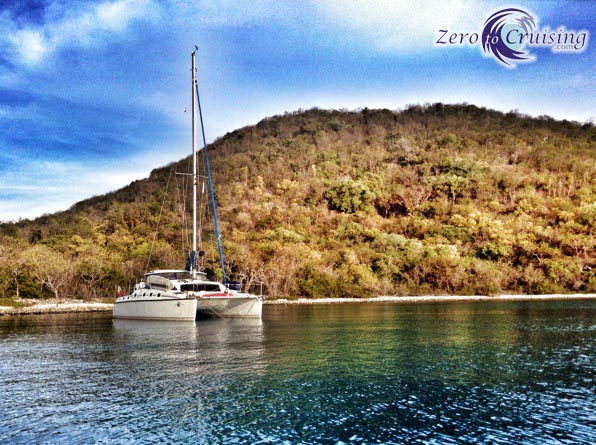 Tied to shore at Benures Bay. You can see a couple more pics of this spot here.

Last night we anchored off the north side of Salt Island. This is another spot where the depths drop away quite rapidly, forcing you to either anchor in super deep water or very close to shore. We opted for the latter, as did most everyone else there. That choice would have been fine if the wind had continued to blow from the SE where we expected it to. Unfortunately, at around midnight, the wind picked up and backed all the way to the north putting us on a dangerous lee shore. We awoke to find that we had a mere 1.5 feet under our keels and were WAY too close to the rocks (I’d estimate 10-20 feet tops)! After becoming aware of this drama, we first took in some of our anchor rode which, although it drew us away from the rocks, is not the best thing to do when the wind and waves are up. At 4:00 AM, we ended up re-anchoring altogether in deeper water, something we probably should have done in the first place. We were not the only boat caught unawares by that weather shift as evidenced by the fact that we saw lights and heard engines running on several of the other boats at anchor there. Needless to say, with the wind still out of the N this morning, we were out of there. 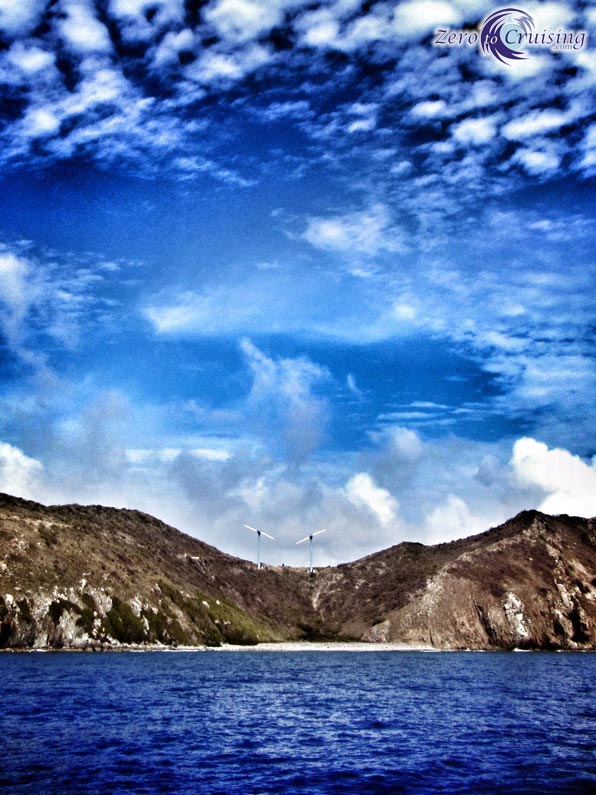 On our way around Peter Island.

Fortunately, as I mentioned at the beginning, a new anchorage is only an hour away. I am now happy to report that we are, for the time being anyway, safely anchored on the south side of Peter Island in White Bay and the water here is glass calm. The current forecast has the wind remaining out of the north until Thursday so we should be good for another day or so. I hope.

As you can see, several of the above scenarios require a bit of effort and skill to contend with which is why it’s probably good that most of the less experienced boaters tend to take mooring balls. In fact, even though those balls cause us difficulties from time to time, I’m thankful that they’re available.

No boat (for us) yet

A passage in pics